About a week ago I went on a hike at Cranberry Lake Park sponsored by Six Rivers Regional Land Conservancy and led by Dinosaur Hill Nature Preserve Naturalist Jane Hoyle. The itinerary focused on fall wildflowers – the fall profusion of goldenrods and asters – but I got sidetracked by caterpillars and other insects along the way. Many times I only look at plants, so thanks to the other hikers for pointing out these cool insects! As always, if you think my ID isn’t correct, please let me know!

Caterpillers crawled mostly unnoticed along the trails. When we looked closely, the colors, patterns, and crazy setae (hairlike structures) fascinated us.

American dagger moth caterpillar (Acronicta americana), which feeds on hardwood trees. It often rests in the position shown in the photo, with its head to one side. 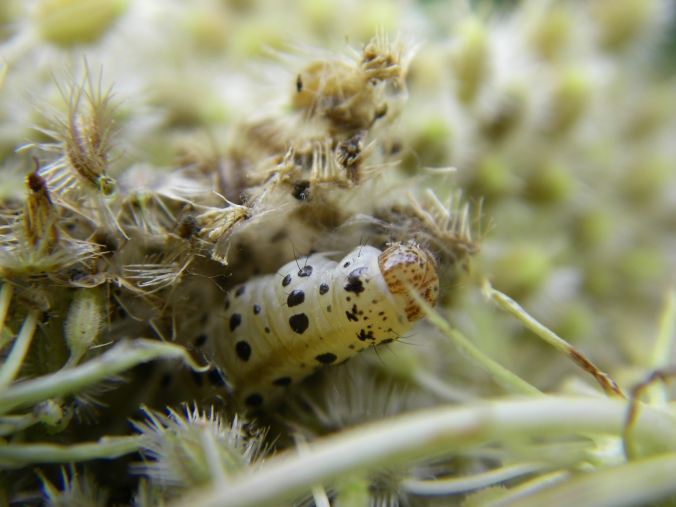 Greenish-yellow Sitochroa Moth caterpillar (Sitochroa palealis). This moth is from Europe, but in 2002 was discovered in North America. It feeds on Queen Anne’s Lace, as seen in this picture.

The next thing that caught our attention was a gall on a staghorn sumac. The gall is caused by the sumac gall aphid. The life history of this gall aphid is fascinating: it uses both sumac and moss as hosts. In the spring one female lands on the sumac and lays an egg. From this egg the whole colony of aphids arises clonally! So all of the aphids in the gall are genetically identical. The aphids release compounds that causes sumac to develop the gall. Apparently these galls don’t hurt the sumacs very much. Check out the picture below! 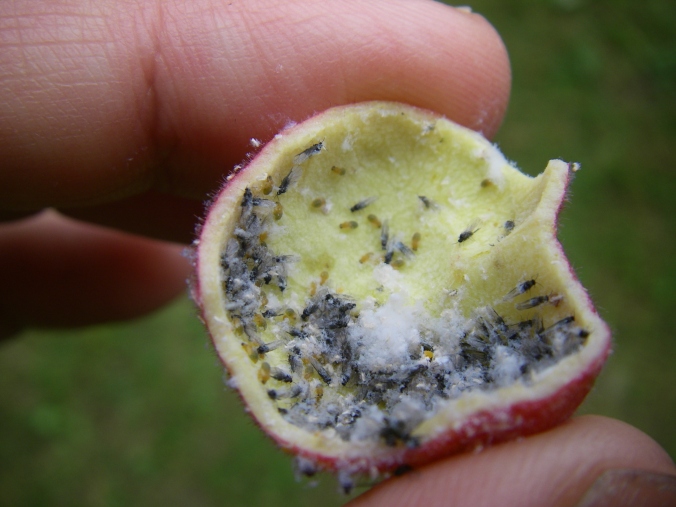 Finally, some clever mimicry. This beetle has coloration that made me look twice. Is it a wasp? Is it a bee? No, it’s a locust borer (probably)!

This beetle looks like a wasp or bee at first glance! It is possibly a locust borer (Megacyllene robiniae). This beetle feeds on black locust trees, which were in the vicinity.