Well, the sun is shining!  It’s a bit cooler than the usual July (fewer mosquitoes!) but summer is proceeding at  Bear Creek Nature Park nonetheless.

Young are still being born and raised, almost grown fledglings are trying out new skills and all over the park, wildflowers grow leggy from the rain, reaching upward as they compete with neighboring plants for the sun. Among those plants are more that illuminate our local history.

Eastern Chipmunks (Tamias striatus) are “chipping” loud and long.  Females often do this as way to ward off intruders from their territory, though some also believe that they’re issuing a mating call which may be the case this week, since their second breeding season is June to August.   Here’s one sitting on a rock in the sun, doing her aggressive or perhaps  flirtatious best, her small body  twitching with every “chip”! 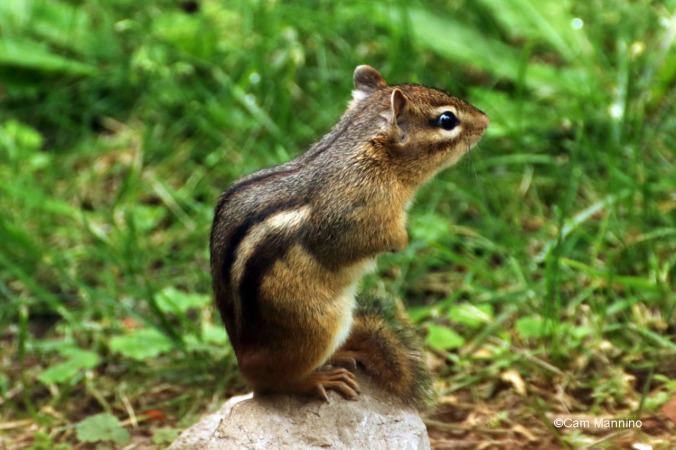 A female chipmunk generally “chips” to warn intruders to stay out of her territory or she could be issuing a mating call at this time of year.

And up in the trees, female birds are still sitting on clutches of eggs or warming nestlings on a cool morning.  Here’s a Cedar Waxwing (Bombycilla cedrorum) sitting on her nest.  According to the Cornell Ornithology Lab, she can make up to 2500 individual trips to construct it! 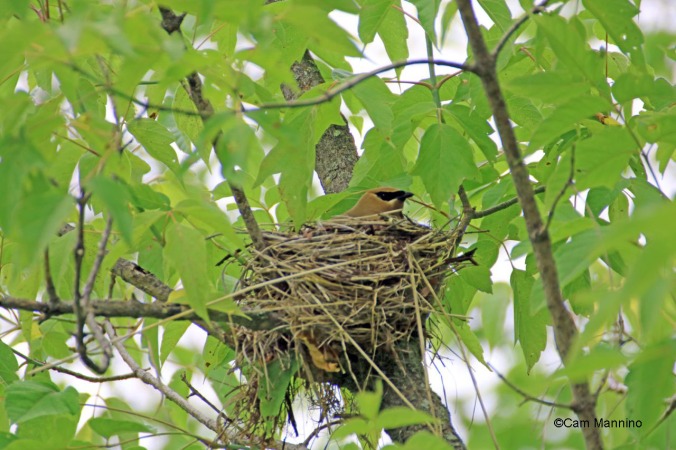 A female Cedar Waxwing may take take 2500 individual trips to build this nest in 5-6 days!

Fledglings are bigger and more confident now.  Here’s a fledgling Eastern Bluebird (Sialia sialis) with his rose and beige breast feathers beginning to replace the brown spotted ones of the smaller fledgling posted last week.

An almost mature Eastern Bluebird will have a rosier breast once all his feathers come in.

As you enter the park from Snell Road, listen for a young Song Sparrow (Melospiza melodia) practicing his trill at the top of a small tree on your right.  He’s been there every time I’ve gone in the last week.  His song’s a little rusty yet and he opens his beak just a bit farther than a mature bird, I think, but he’s catching on! Here’s a link to his “sewing machine” sound – a few squeaks and tweets following by a staccato trill.  I think the second “song button” on the link sounds most like our young Song Sparrow.

A fledgling Song Sparrow throws his head back and practices his “sewing machine” trill.

Down at the eastern end of the Center Pond, a young Wood Duck (Aix sponsa) floats quietly beneath the overhanging branches of a shrub. There are two siblings keeping each other company there at the moment. 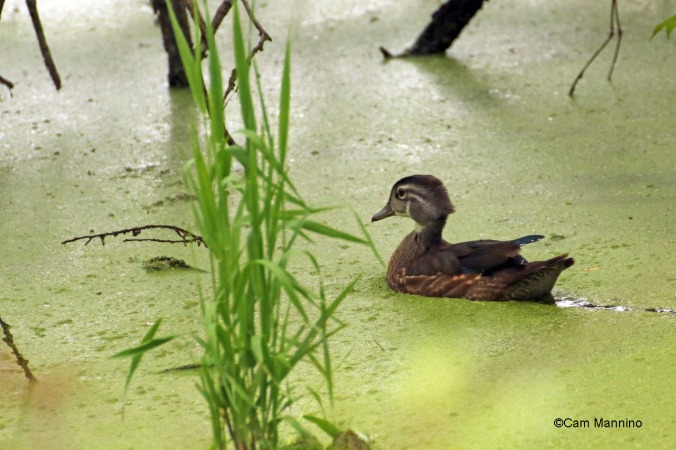 A young Wood Duck floats among the duckweed at the eastern end of the Center Pond.

And above the lawn that extends in front of the playground, two Barn Swallows (Hirundo rustica) soared above the clover-covered grass catching insects (mosquitoes, I hope!) on the wing. Though they have cobalt blue backs like the Tree Swallows (Tachycineta bicolor ) I talked about earlier, these agile flyers have rusty red breasts rather than white ones.  I only got a photo of them on the wing so here’s a link to see them up close. 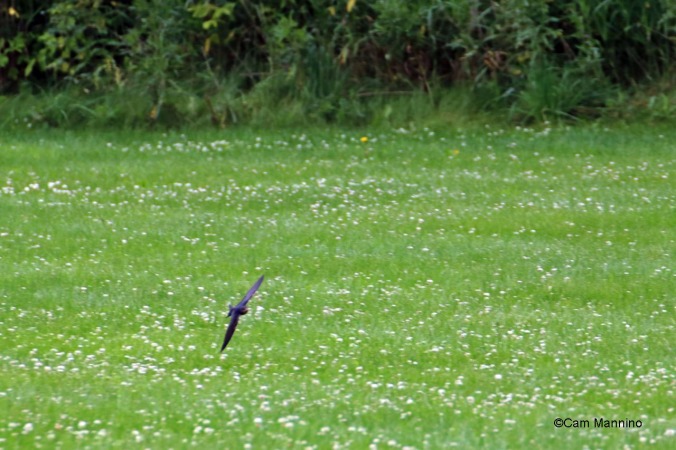 Barn Swallows soar above the lawn near the playground. They’re distinguished from Tree Sparrows by a rusty red breast.

At last, I’ve seen my first Monarch Butterfly (Danaus plexippus) of this summer.  Flitting quickly from blossom to blossom, this female searched for nectar from  Swamp Milkweed (Asclepias incarnata) in the eastern Old Field.  Unfortunately, the flowers aren’t open yet, perhaps delayed by  unseasonably cool temperatures.   A Monarch who left Mexico in the spring went through 3 generations to get here, turning from egg to caterpillar to chrysalis to butterfly at each stop along the way – and yet the third generation retains the knowledge that its forebear lived at Bear Creek last year!  If this butterfly’s eggs eventually produce another caterpillar and another butterfly, that lovely creature  will make the whole 2,000 mile trek back to Mexico in one long haul.  Amazing.  Monarch populations were up slightly this year but are still down 90% in the last 25 years.  May this one prosper and multiply!

A female Monarch Butterfly explores the buds of Swamp Milkweed in the eastern Old Field.

Last week, I featured  some of the plants that were here when Indians lived in our township, some native wildflowers that probably greeted early European settlers and the non-native grasses and flowers that  were planted by farmers for pasture and silage.  This week, I thought I’d share some of the plants used or brought here by those settlers, some for their reputed medical benefits.

According to Wikipedia,  “A word with the suffix -wort is often very old…It was often used in the names of herbs and plants that had medicinal uses, the first part of the word denoting the complaint against which it might be specially efficacious.”

For example, this delicate little flower on a long stalk growing profusely on the Snell path into the park is called Nipplewort (Lapsana communis) because, some say,  it was thought at one time to increase the flow of breast milk.  It’s a widespread non-native these days! 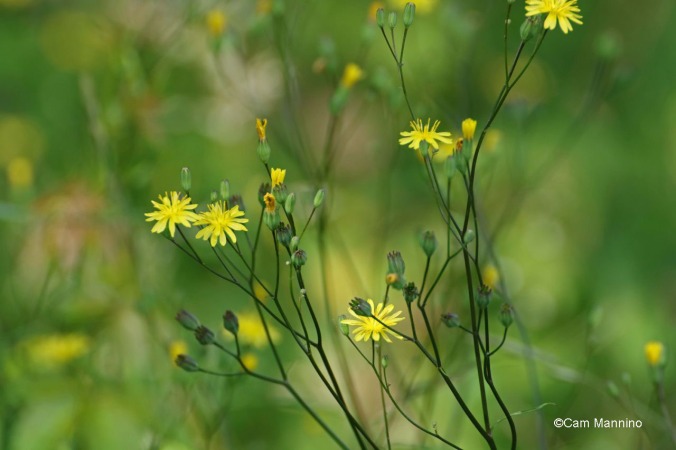 Nipplewort, an invasive non-native, may have been brought by settlers to our area as a treatment for increasing the flow of breastmilk. Some herbalists still think it works that way today.

I’ve already discussed the beautiful native with the terrible name Spiderwort which folks must have thought of as a cure for spider bites.  It’s still used by herbalists today and is still blooming in the driveway circle at the Snell entrance. 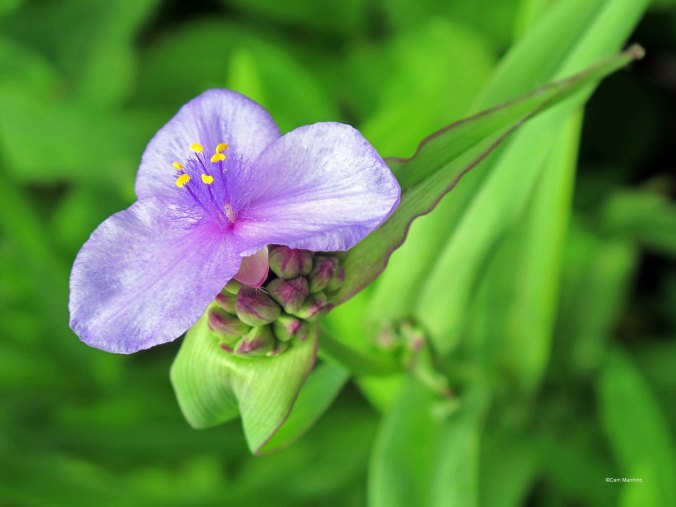 Spiderwort is a “wort” plant that must have been thought useful against spider bites and other skin problems. It’s still used by herbalists for various ailments today.

The most well-known “wort” these days is Common St. John’s Wort (Hypericum perforatum), a plant used as a common herbal supplement around the world.  According to the National Center for Biotechnology Information, it’s been used as an herbal treatment since the time of the Greeks, so  I’m guessing the plant arrived here in someone’s garden for that very reason.  Unfortunately,  this species of St. John’s Wort is  invasive,  poisonous to livestock and also crowds out other plants, including our  native St. John’s Worts, which thus far, I’ve not come across. 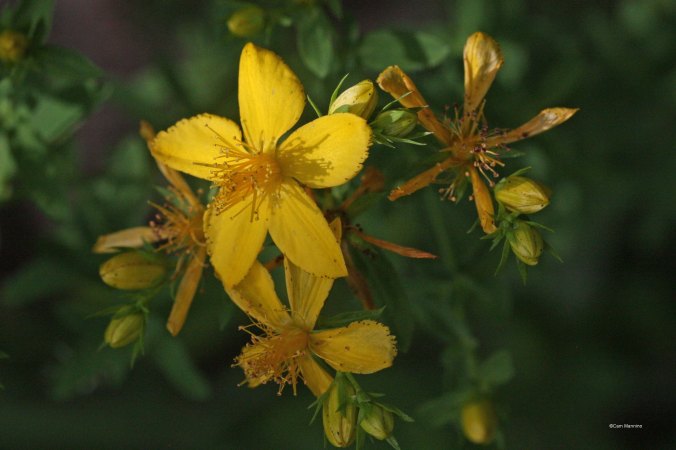 St. John’s Wort is used as an herbal supplement but it also toxic to livestock.

A native Bear Creek wildflower thought to be medicinal by herbalists is Heal-All (Prunella vulgaris) .  It was used by Indians to treat superficial wounds and is used to some extent that way in Europe today and for other ailments in Chinese medicine as well.  Fortunately, bees and butterflies like this native plant too! 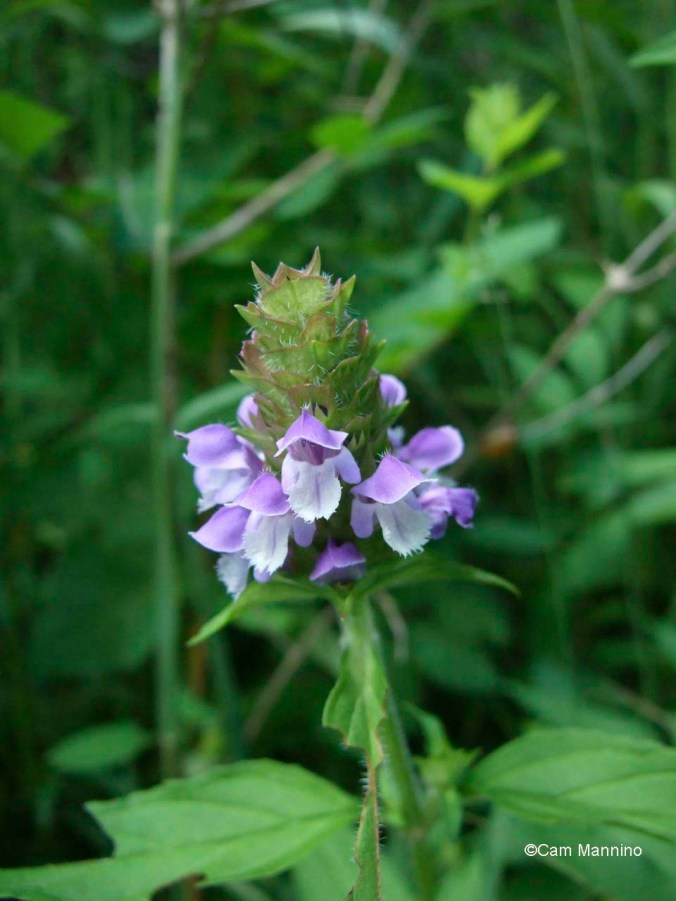 Heal-All doesn’t quite live up to its common name, but it was used by Indians to treat superficial wounds and is also still used as an herbal treatment in Europe and China..

“Banes”:  Plants for Warding Things Off

And then there are the “bane” plants, which people believed could ward off or even be toxic to other species.  I’ve already discussed Daisy Fleabane (Erigeron species), which is meant to be the “bane” of fleas and may have been used at one time in straw mattresses for just that reason.  It’s prolific in Bear Creek this year, the most I’ve ever seen there!

Daisy Fleabane was thought to be the bane of fleas, of course! Good for mattress stuffing.

And now, growing on the west side of the Snell entrance path, among the trees, is Red Baneberry (Actaea rubra), a native plant with “bane” in its name because it is toxic to humans.  Wikipedia claims it was used to make poison arrows by Native Americans.  So don’t eat them.  You wouldn’t get them down anyway, probably; they’re extremely bitter! They are attractive to the eye though! 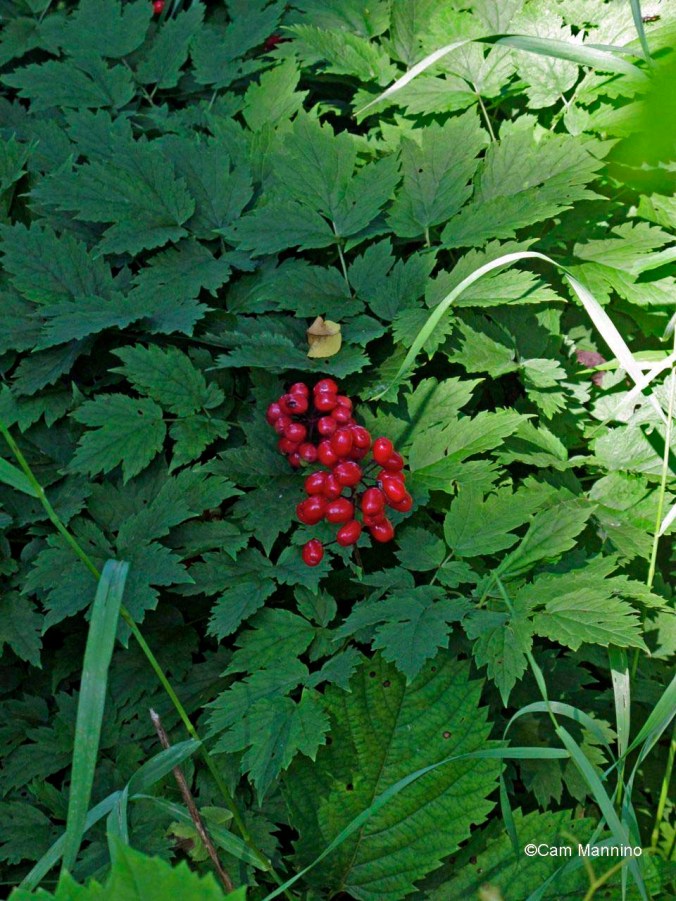 Native Red Baneberry is toxic but tastes so bitter no one would want to eat it!

Chicory (Cichorium intybus), on the other hand, is neither a “wort” or a “bane.  It may have arrived here as a coffee substitute as it is still used in some herbal drinks.  But farmers could also have planted it as  part of their pasturage for livestock. It’s considered an invasive species since it’s seen all along roadsides, but in Bear Creek, it seems to be coexisting with our native plants.  I have to admit that I love its pale blue color, so rare in nature, and the pinking-scissors edge of the petals. 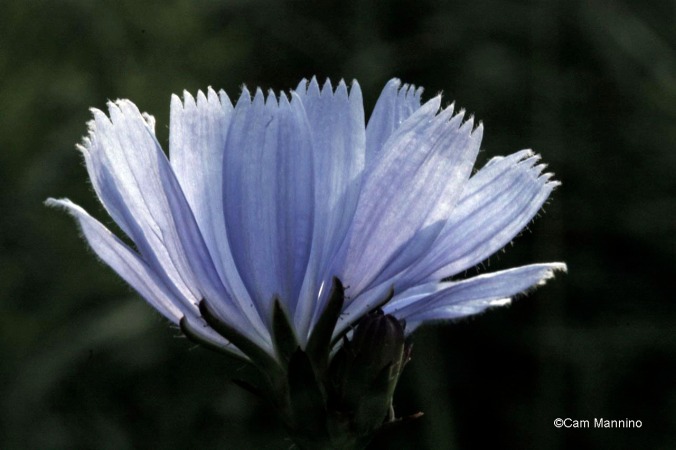 Chicory, a potentially invasive non-native plant, may have come here as a coffee substitute or as part of planting pasturage for livestock.

And this week, I also saw the white/light pink version of Chicory, which I’ve never seen at Bear Creek before. 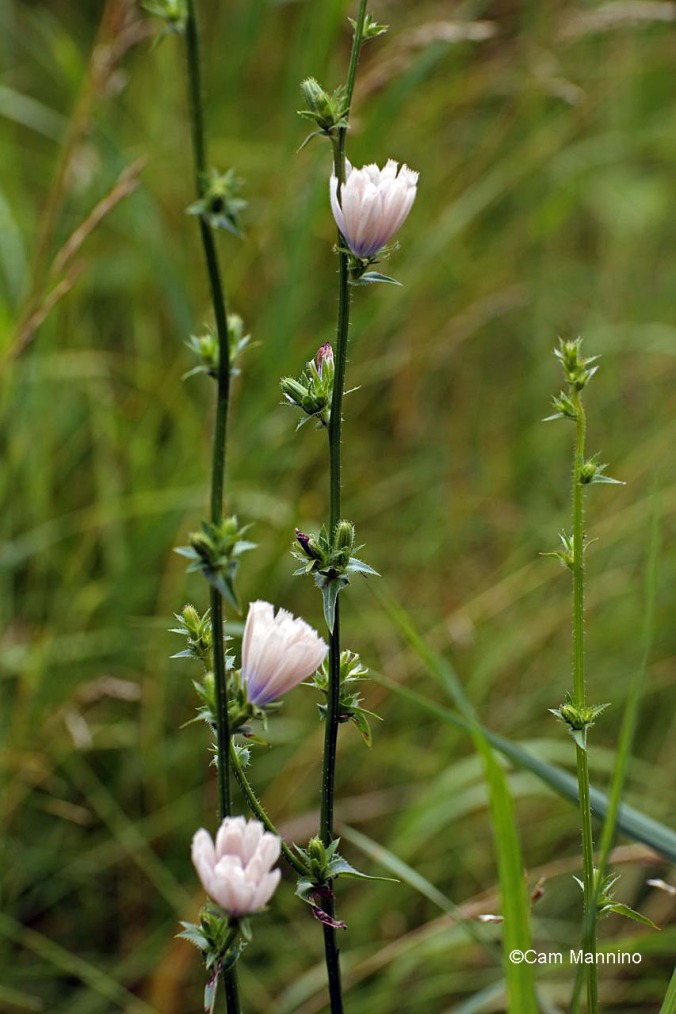 A white/pink version of Chicory, rather than the usual blue.

Before they finish blooming, I want to mention three other humble native plants before their blossoms are entirely gone.  The first might have been named by a woman long ago, Thimbleweed (Anemone virginiana).  The “thimble” is the fruit and it disperses its seeds by tumbling along the ground.

The “thimble,” the fruit of Thimbleweed, tumbles in order to spread its seed.

White Avens (Geum canadense), a very modest woodland native is one of the plants that can live near/under Black Walnut trees but it grows elsewhere in the woods of Bear Creek as well.

White Avens appears all over Bear Creek and is one of the new native plants that can live beneath Black Walnut trees.

And lastly, this delicate plant has almost finished flowering for the year.  Now it will start making little burrs that spread by sticking to animal fur or your pant leg!  You’ll spot Enchanter’s Nightshade (Circaea canadensis) along many dappled woodland paths in the park.  It’s no relation to Deadly Nightshade.  It was given its exotic name because it lives in the shade and its genus, Circaea,  was named after the enchantress, Circe, from Greek mythology who supposedly used it in her magic potions.

Enchanter’s Nightshade is not related to the deadly kind and got its exotic name by preferring dappled light and from being supposedly used in magic potions by Circe, a mythological Greek enchantress.

The woodland paths and sunny Old Fields of Bear Creek still carry memories of our local history in the wildflowers that bloom there.  That idea intrigues me and makes even the most humble plants at my feet more interesting.  Hope it does for you, too.

3 thoughts on “This Week At Bear Creek: Youngsters Everywhere, My First Monarch and Nature’s Medicine Cabinet.”