Autumn’s here and a bit gone, so winter prep begins in earnest at Bear Creek.  The hibernators are finding or freshening up snug housing for the winter.  Migrating birds stop for a rest and a repast before continuing their journeys, while others arrive to spend the winter with us.  A few hearty insects, who survived the migrating birds and the cold nights, hop and fly on warmer south-facing slopes. Leaves rustle underfoot and tumble past so the quest continues to learn their names, to be more familiar with the giants of the plant world.  Let’s start with a walk through the Oak-Hickory forest.

One of this week’s highlights was discovering a North American Raccoon (Procyon lotor) in the same place I’ve seen them almost every spring or fall – in a huge hole in a white oak halfway down the eastern forest path. On my first walk this week, I could only see a bit of fur at the bottom of the hole, but that brought me back the next morning.  At first the hole appeared empty. Disappointed, I approached, crunching noisily through the leaves and surprise!  A raccoon was fully visible in the dark of the huge hole, staring intently at me while I took its photo.  What a treat to know that once more one of these clever bandits will spend the winter dozing in this cozy home with its ideal southern exposure.

The chirping and dashing of chipmunks and squirrels will accompany your walk through our Oak-Hickory forest again this week.  They are  eating and storing acorns and other nuts for hibernation or winter meals.   Here’s an Eastern Chipmunk ((Tamias striatus) with a mouthful of leaves, evidently planning to refresh its burrow before its long sleep .  Chipmunks wake every few weeks in winter, eat  a bit from their food stores and snooze some more.

A scratching and scrabbling sound nearby alerted me to a  pair of Fox Squirrels (Sciurus niger) spiraling up a giant tree near the marsh.  Fox Squirrels mate between November and March and then again in the summer – so it may have been a practice mating chase.  Or perhaps just two young ones feeling their oats, or in this case, acorns!  One paused high above on a tree knot.  The other used its 180°-rotating ankles to stretch out lengthwise, head down on the trunk.  Fox Squirrels prefer winter dens within woodpecker holes, but if none are available, they will build leaf nests in the crotches of trees. They spend the winter days with us – as anyone with a bird feeder knows!

Down at the Pond, Out in the Fields: Migratory Visitors and a Couple of Hearty Insects 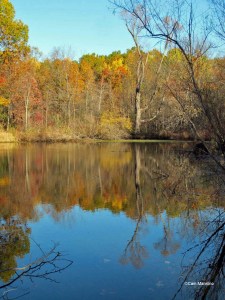 When I reached the Center Pond this week (so clear this time of year!), I saw two migrants that I’d never seen before  busily flipping over leaves to search for insects in the muddy shadows of the southern shore – a male and female Rusty Blackbird (Euphagus carolinus).  Cornell lab calls this bird “relatively uncommon” because it is “one of North America’s most rapidly declining species.”  I hope this turns around because I was thrilled to see them on their trip from Canada’s far north to their southern destination.  My photo of the male in non-breeding plumage is below.  I didn’t get a decent shot of the female, who is gray-brown with a black stripe through the eye. This Cornell link has much better photos of both genders.

Up near the Playground Pond, I saw a recent arrival from Canada who’ll spend the winter with us – the Dark-eyed Junco (Junco hyemalis).  I’m sure you’ve seen flocks of them under your feeder in the winter.  Their black backs and white bellies make them look like Chinese calligraphy on white snow.

I’ve been posting photos of juvenile Cedar Waxwings (Bombycilla cedrorum) for the last few weeks but this week I got a good look at a beautiful adult one.  Here you can see both the yellow tip of its tail and the bright red wing spots that evidently looked like sealing wax to the person who named this elegant bird.

I had an opportunity to clearly see a Swamp Sparrow after only spotting the head of one at Bear Creek last week!  It’s a handsome little bird with slightly longer legs than some sparrows so it can wade in and pull food from the water. (Thanks to Ruth Glass again for the ID!)

Likewise, on October 10, I posted a shadowy photo of a Golden-crowned Kinglet (Regulus satrapa) at Bear Creek.  Today one grazed a window at our home! I followed instructions found on the web and waited 5-10 minutes before intervening – though I had a resting box ready, just in case.  Luckily, it recovered and flew off,  but before it did, I got a slightly fuzzy photo of its golden crown taken through the window. This tiny bird, smaller than a Chickadee and not much bigger than a Hummer, has traveled all the way from the Canadian north and can survive  in -40° temperatures! So let’s hope its accident won’t prevent this hardy survivor from arriving just a bit further south where it intends to spend the winter.

Insects that Made It Through Very Chilly Nights!

On sunny days,  you can still hear grasshoppers in warm spots on the trail – though far fewer than before.  I think they are still Red-legged Grasshoppers (Melanoplus femurrubrum)since they usually remain in the fields through October.  The female Red-legged Grasshoppers lay their eggs in the ground during late summer or fall. Only the eggs overwinter, I believe, though some species overwinter as nymphs. (If anyone knows more, please share!) I saw a pair mating rather awkwardly on the edge of a path in October last year.  The male is the smaller, greener grasshopper.

I always thought that all red dragonflies at Bear Creek were Ruby Meadowhawks.  But it seems that there are multiple red Meadowhawk dragonflies. The one I’m seeing on almost every sunny path at the moment is probably a late bloomer named the Yellow-Legged Autumn Dragonfly (Sympetrum vicinum) or at least that’s my best guess.

Now, About those Falling Leaves…

So why the color change?  And how do leaves fall?  The shorter days cue trees to reduce the chlorophyll in their leaves, the substance which makes them green in summer and able to feed sugars to the tree through the chemical action of photosynthesis.  As the chlorophyll subsides with less light, other pigments begin to show or form in the leaves making the leaves turn yellow, orange and red.  In response to less sunlight, a layer of cells gradually forms at the base of each leaf blocking the veins that carry fluids into and out of the leaf.  When that seal is complete, the leaves detach and fall.  More detailed info at this USDA Forest Service link.

Two Members of White Oak Group, the Ones with Rounded Lobes

While in the woods, I continue to snap photos of leaves, trying to imprint their shapes in my mind.  I can now easily recognize the White Oak (Quercus alba) with its rounded lobes and light gray bark.  The fall leaves can evidently be a variety of colors, but are mostly red to brown.

The Bur Oak (Quercus macrocarpa) is a member of the White Oak family, too, with rounded lobes but much deeper sinuses (spaces between the lobes) than the White Oak.  The bristly acorns are a clue to its name.

Three Members of the Red Oak Group, the ones with Pointed Lobes

Northern Red Oaks (Quercus rubra) have leaves with 7-11 bristle-tipped, pointed lobes.  The fall leaves can be red to brown.  I loved the deep chocolate color of this one on a deck in the marsh.

The leaves of Black Oaks (Quercus velutina), a member of the Red Oak group, have only 5-7 pointed, bristle-tipped lobes and can be yellow to brown in the autumn.

Another member of the Red Oak group, the Northern Pin Oak (Quercus palustris), has deep sinuses that reach almost to the central vein between the pointed lobes .  These trees encircle the playground with color right now and they are in the woods as well.

Acorns, the nuts which contain Oak seeds, are dropping through the leaves and rolling underfoot.  Eastern Chipmunks take some of them underground to the larder chambers in their burrows.  Squirrels simply dig holes in the ground and cover the nut with earth.  They’ll find some to eat in the winter and others will be forgotten.  While feeding wildlife (some birds eat acorns too), this burying of nuts also helps replenish the forest with saplings in coming years. (Cool info on acorns at this link that two people sent to me this week! Thanks to Mary and Ben!)

Two Kinds of Maples – there are many more!

Maples are tolerant of shade, so they form part of the “understory” of our woods. They produce winged seeds that we, as kids, called “helicopter seeds,”  but that botanists call “samaras.”  There’s a photo at this link of samaras from a Silver Maple.

Red Maples (Acer rubrum)are one of the most widespread trees in Eastern North America.  I liked how the one on the left below had only partially turned when it fell, so it ended up tri-colored. The scarlet one on the right turned before it fell.

Some other Leaf Favorites

I’m particularly fond of the 3-fingered leaf of the Sassafras tree (Sassafras albidum).  According to Wikipedia, in the 19th century,  Sassafras roots were used for root beer or “sarsaparilla,” a soft drink that straight-arrow cowboys ordered at the saloon in old western movies, a source of amusement to their macho compatriots.  You can smell the root beer scent if you snap the stem of a green Sassafras leaf.  However, the roots turn out to be bad for your liver, so root beer these days is made with artificial flavorings.

A Staghorn Sumac (Rhus typhina) left a lovely pattern on the path near the marsh. These native trees filled the field behind my parents’ house on Lake George Road so I have a particular fondness for the graceful shape and scarlet color of their autumn leaves.

A New Home for Native Plants at Bear Creek!

This week a team of six volunteers and staff caravanned to Armada to collect two beds of native plants donated to Bear Creek by Nancy Parmenter.  She’d sold her house and the new owners needed a larger play area for their children.  So we’re very grateful that she gave them a new home at Bear Creek.  The crew spent several ideal autumn hours digging up the plants and then re-planting them in a new bed near the parking lot.

The plants may not look glamorous now in late fall, but by spring  25 species of native grasses and wildflowers will be adding more color and diversity to Bear Creek.  The garden is just to the right of the pavilion and there’s a wood chip path through  it so that in spring you’ll be able to walk close to the flowers.   Thank you to everyone who dug and planted and to Nancy Parmenter for this wonderful donation!

So you have lots of reasons to visit the park on these glorious autumn days – watch for migrating birds, laugh at chipmunks during their fall eating frenzy, be escorted by late season dragonflies, spy on a hibernating raccoon or have a first look at our newest native flowerbed.  Savor the season!