So far in this  blog,  I’ve paid a lot of attention to migratory birds and I’ll talk about one this week because we want to see them before they’re gone, right?  But I want to periodically focus on the “ordinary” birds, some of whom turn out to be not quite so ordinary!

I thought we’d start this week with a year ’round bird that  I’ve taken taken for granted for too many years, The Black-Capped Chickadee (Poecile atricapillus).

The Black-capped Chickadee has an alarm call to which many birds pay attention. The more “dee’s” in the alarm call, the more danger!

Like me, you probably thought this little bird was just another cute face – but we were wrong!  At Cornell Ornithology’s website, allaboutbirds.org, I discovered these alert, bright little birds have astonishing capabilities.  For example, they hide seeds and other bits of food in separate locations and “can remember thousands of hiding places.”  I can’t even find my glasses half the time!  Remember how Harry Potter had a “pensieve,” a magical bowl that could strain out unnecessary memories? Well, according to Cornell, every autumn Chickadees literally “allow brain neurons containing old information to die, replacing them with new neurons” so they can adapt to change in the next season!

Chickadees’ calls are described by the Cornell Lab as “complex and language-like,” full of information.  For example, you’re probably familiar with this tiny bird’s “Chicka-dee-dee-dee” call.  It turns out that the more “dees” you hear, the more dangerous the threat level.  Their alarm calls are responded to by many other birds, even those with no similar call.  They sleep in individual cavities that they carve out of rotten or soft wood like birch and willow, even without the sturdy beaks of the woodpeckers.  Which just goes to show that looks, brains and (a kind of) brawn are part of the package for the tiny puffball we call a Black-Capped Chickadee.  Who knew? 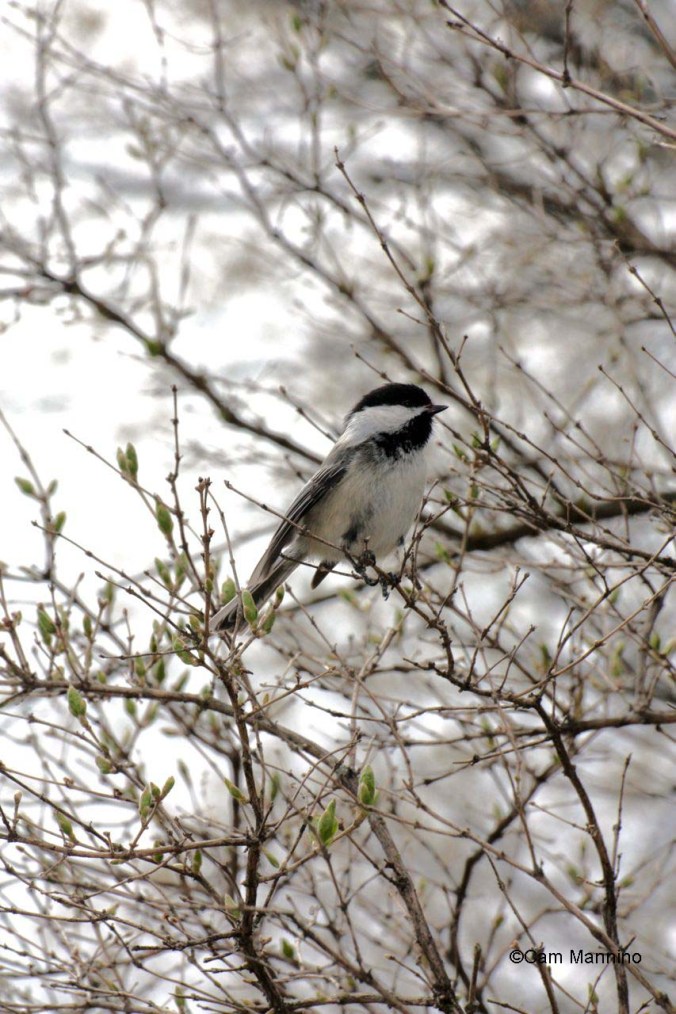 Black-capped Chickadees have an amazing memory, remembering thousands of places it has stored seeds and other foods.

Since the breeding season is off and running, you might come across an occasional fledgling near bushes in the park or hopping awkwardly on a boardwalk like this little American Robin (Turdus migratorius).  Not to worry.  When baby birds get too big for the nest, the parents stay with them and feed them, though you may not see them at the moment.  (See our earlier post on “Saving Creatures (seemingly) in Distress.“) 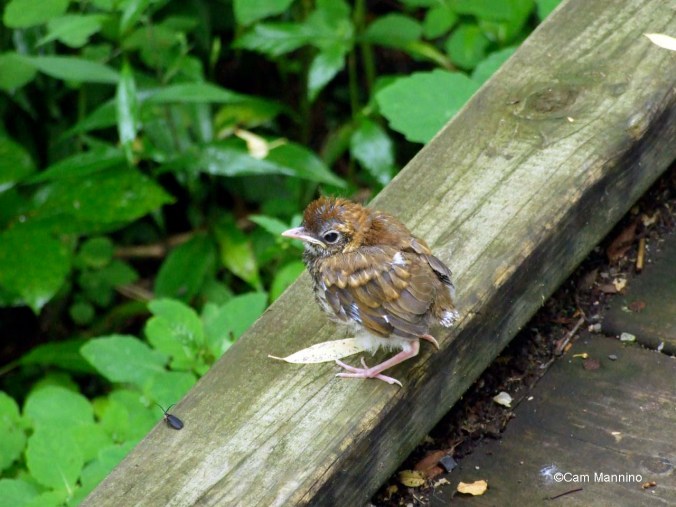 This fledgling Robin [Edit:  Actually it’s a fledgling Wood Thrush! I stand corrected by a reader and local birder Ruth Glass]actually doesn’t need rescuing. His parents are closeby and will come to feed and care for it when you’re gone.

[Edit:  Thanks to the comment of a knowledgeable reader and local expert birder, I now know that this is a fledgling Wood Thrush!]Many people still think of Robins as harbingers of spring, but they are generally here year round; in cold weather, they roost in trees and eat berries. I’ve seen them in Bear Creek during the winter eating berries covered in ice!  In summer, they tend to eat more worms in the morning (which can make them vulnerable to pesticide poisoning) and more fruit or berries in the afternoon.   (Cornell Lab says if they eat honeysuckle berries exclusively they can get tipsy!) Males sleep in roosts but females tend to sleep on the nest until the end of the breeding season. Robins can produce three broods per season and they need to because unfortunately less than half the robins in any given year survive to the next year.  But a lucky one can live to be 14 years old! 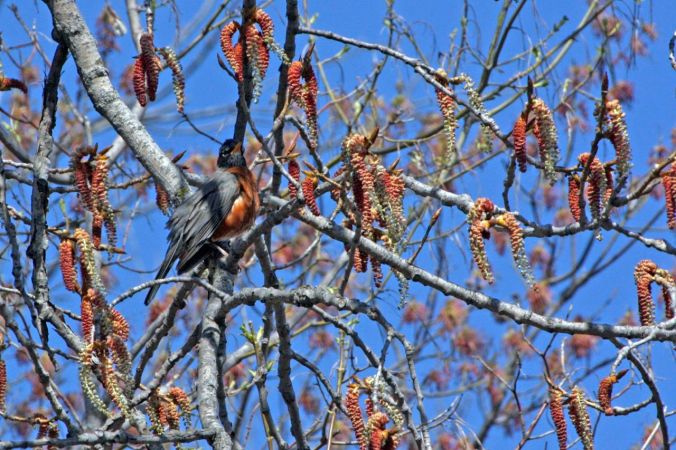 An American Robin among the spring catkins of an Eastern Cottonwood tree.

The Eastern Phoebe (Sayornis phoebe) is about to start its second brood.  The male, who in the early spring can be heard singing “Fee-bee,” will now care for the first brood, while the female starts freshening up the nest and laying a second set of eggs.  They’re not easy to spot now that the male is not singing,  but if you see this modest gray bird twitching its tail in a shrub or darting down to the ground to snatch a fresh bit of moss, there’s probably a nest nearby.  The Phoebes are migrants who arrive early and stay late, sometimes into October, so you’ve got time. 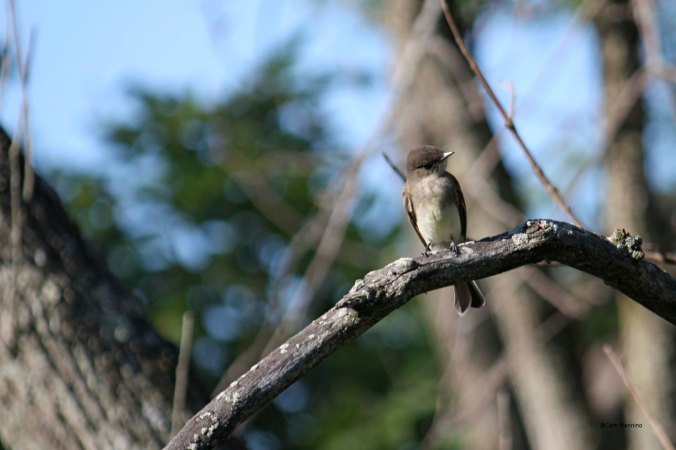 An Eastern Phoebe at the playground pond. The female repairs her nest and starts a second brood in June while the male cares for the first brood.

I have to mention one of the our native ferns (which I love) that has no doubt unfurled on the left side of the Snell Road path into the park just before it opens into the field.  It appears to be Ostrich Fern (Matteuccia struthiopteris), a name that pleases me, because although they may be fully open now, when they are unfurling, they remind me of a group of elegant ladies in plumed hats having a confab. 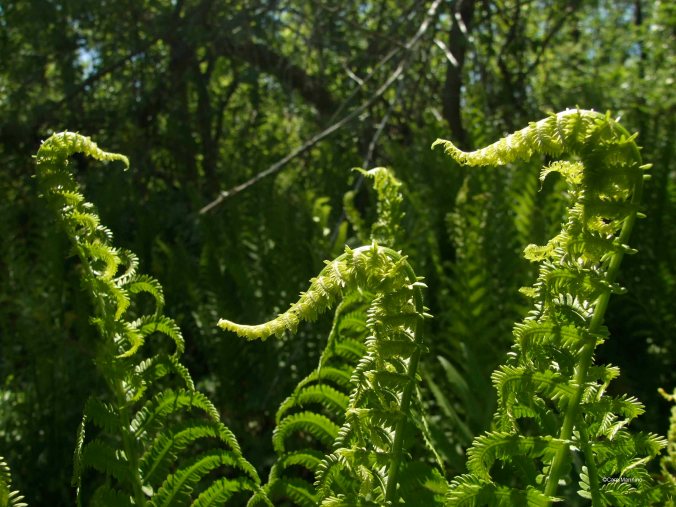 Ostrich Fern seems an appropriate name for these unfurling native plants that look like the plumed heads of a confab of elegant ladies.

Speaking of plants, perhaps like me, you’ve heard the terms “Invasive and “Native” plants and thought all plants fell into those two categories.  But Ben, Oakland Township’s Stewardship Manager, has taught me to consider one more category. Non-native plants that peacefully coexist with our native ones are simply called “Non-native. ” So I thought I’d start sharing  what I’m learning here this week.

“Invasive plants”  in our parks are obviously not native to Oakland Township and present problems for our native plants and the creatures that depend on them for food and shelter.  They limit the wonderful diversity nature provides for us by either releasing toxins that prevent the growth of native plants, shading them out, or simply taking over large areas of land with their aggressive growth.  Let’s consider a beautiful but highly problematical invasive, the Multiflora Rose (Rosa multiflora), blooming now at the southern edge of the small meadow west of the center pond. 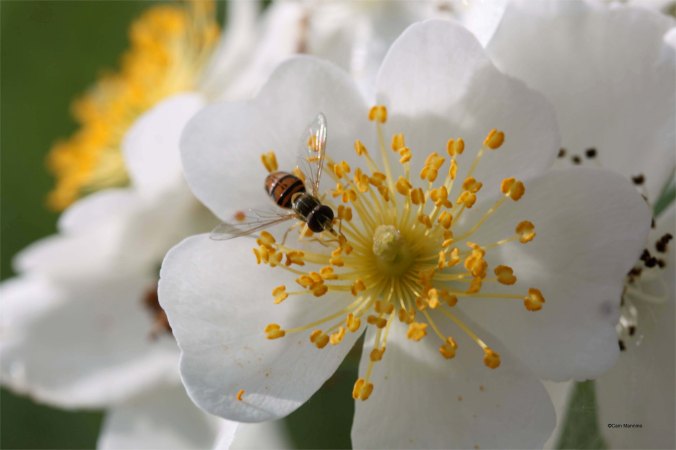 Multiflora rose is lovely, but as a non-native, it aggressively takes over spaces needed by our native roses and other native plants that provide food for our native bees and birds. That’s a hover fly sampling the pollen.

Pretty flowers, right? –  but super aggressive growth!  This rose, originally from Asia,  was probably brought here for just that aggressive tendency,  to make sturdy fences for livestock,  and is still being used some places on divided highways to block light from the opposite side.  Its flower is lovely, but then, so is our native pink Pasture Rose (Rosa carolina) which is also blooming right now! 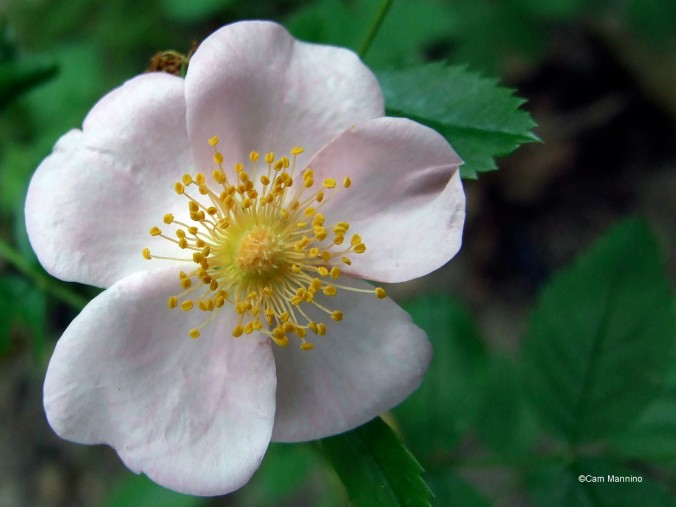 The native Pasture Rose can be crowded out by the more aggressive Multiflora Rose and other non-native plants.

Pasture Roses are hardy.  Like many native plants, they are adapted to fire and come back vigorously after a burn.  They tolerate drought and resist the usual diseases that afflict cultivated roses – and they smell like a real rose!  Long-tongued bees like the Bumblebee (see below) feed on them, as do the caterpillars of a variety of moths.  Native birds like the Meadowlark and  Bob-White and the Non-native Ring-Necked Pheasant,  birds we used to see more commonly in Oakland Township,  eat the red rose-hips that develop when the petals fall.   In Bear Creek, I’ve only come across Pasture Rose on the path through the Western Woods (not an ideal location for this sun-loving plant), just beyond the bridge at the south end.  Perhaps, with the informed restoration that Ben and the Parks Department are doing,   this remnant will eventually return to the edges of the meadow where the Multiflora Rose now dominates.

So, what about the category of “Non-native” plants that aren’t invasive?  Well, how about everybody’s favorite, which is blooming right now, the Ox-eyed Daisy? 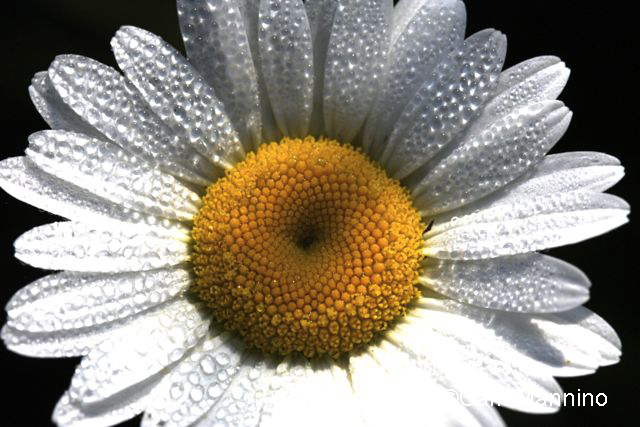 The Ox-eyed Daisy is a non-native flower but isn’t invasive. It peacefully coexists with our native wildflowers.

Ox-eyed Daisies (Leucanthemum vulgare) originated in Europe and Asia, so they’re not native,  but they aren’t considered invasive here. Their presence usually indicates land that’s been disturbed by human activity;  in the old  fields of Bear Creek that would simply be farming or perhaps gardening in nearby homes.  They aren’t native plants but their presence generally does not disturb or decrease the population of native species, like invasive plants do.  In some parts of the country, Daisies can be invasive,  but here they peacefully coexist with our native wildflowers.

We’ll come back to exploring these three plant categories as different ones bloom over the summer.  But having mentioned the Pasture Rose, the ubiquitous Bumblebee (genus Bombus) , who frequents it, deserves a bit of attention.  Here’s one approaching a native Campanula, probably Harebell ( Campanula rotundifolia).  Notice its long tongue which it uses to go deep into flowers. 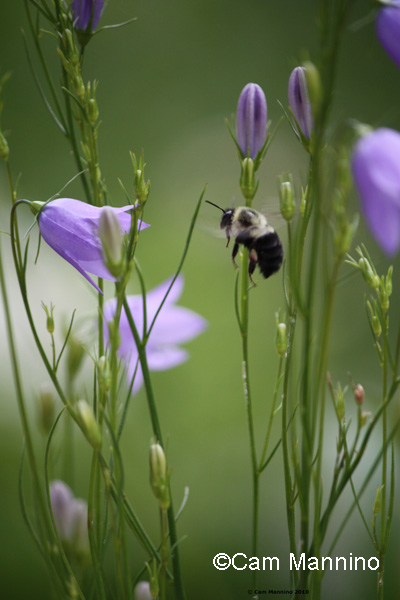 Notice the bumblebee’s long tongue as the bee approaches a native Campanula/Harebell.

Queen bumblebees hatch in early spring and bluster about looking for an underground burrow in which to nest.  They gather pollen, lay their eggs on  it,  cover them with wax and incubate them – like birds! – for four or five days.  When the larvae hatch, they eat the pollen and construct cocoons from which caretaker females emerge to tend the later broods of fertile bumblebees.  Only the Queen survives the winter to start the cycle again.  Here’s one with the pollen pouches on its legs nicely filled on a Non-native plant, Hairy Vetch (Vicia villosa).  Those pollen pouches always remind me of jodpurs. 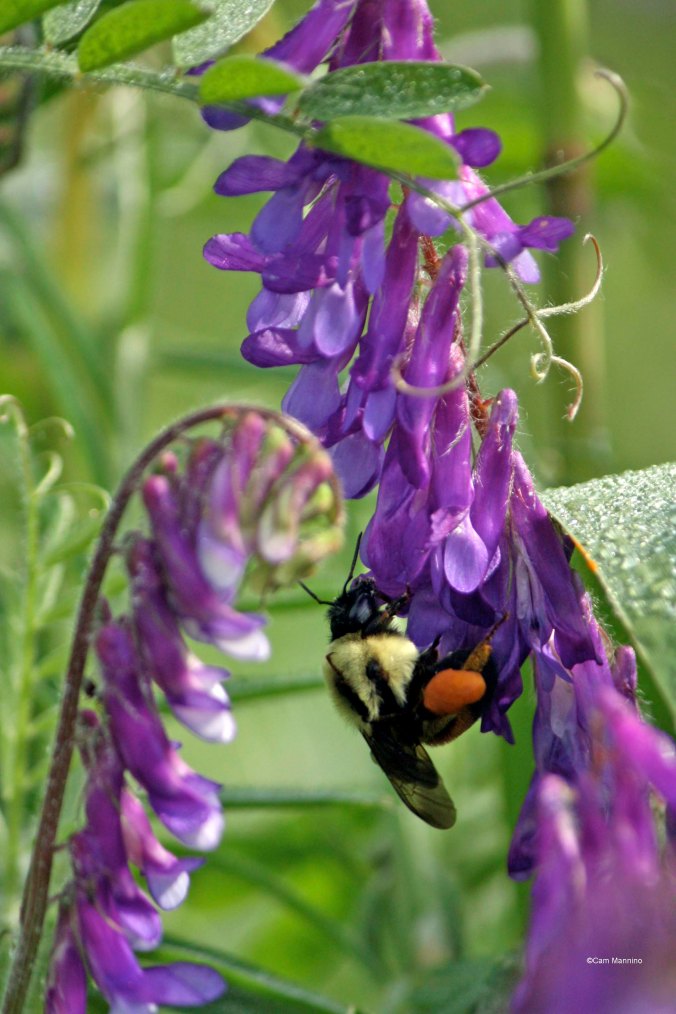 This bumblee is filling up the pollen pouches on it legs from a Non-native plant, Hairy Vetch.

I’m wondering if this beautiful dragonfly might be spotted in the large marsh on the northeast part of the park near Gunn Road.  I’ve only seen this big beauty (about a 2 inch wingspread) when the water is high there , but with all the rain, perhaps it will appear again!  It’s called simply the Twelve-spotted Skimmer (Libellula pulchella). 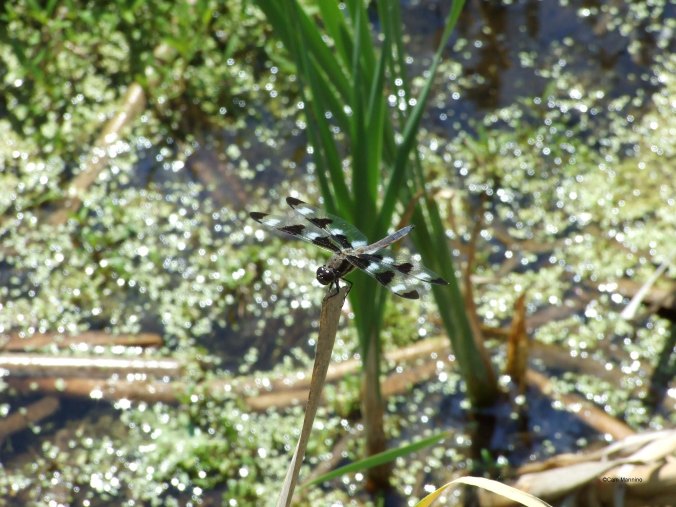 The Twelve-spotted Skimmer perches on a reed in the marsh near Gunn Road.

And how about this elegant insect, the Ebony Jewelwing Damselfly (Calopteryx maculata)! The glamorous male should appear now at the back of the big loop in the northern part of the park or in the woods near the large marsh, where the female, modest brown with “smoky wings with white dots near the tips”  lays her eggs in the “soft stems of aquatic plants.”   Thankfully, someone with a poetic sensibility named this one, with its gauzy black wings and electric blue body. (Quotes from Wikipedia) 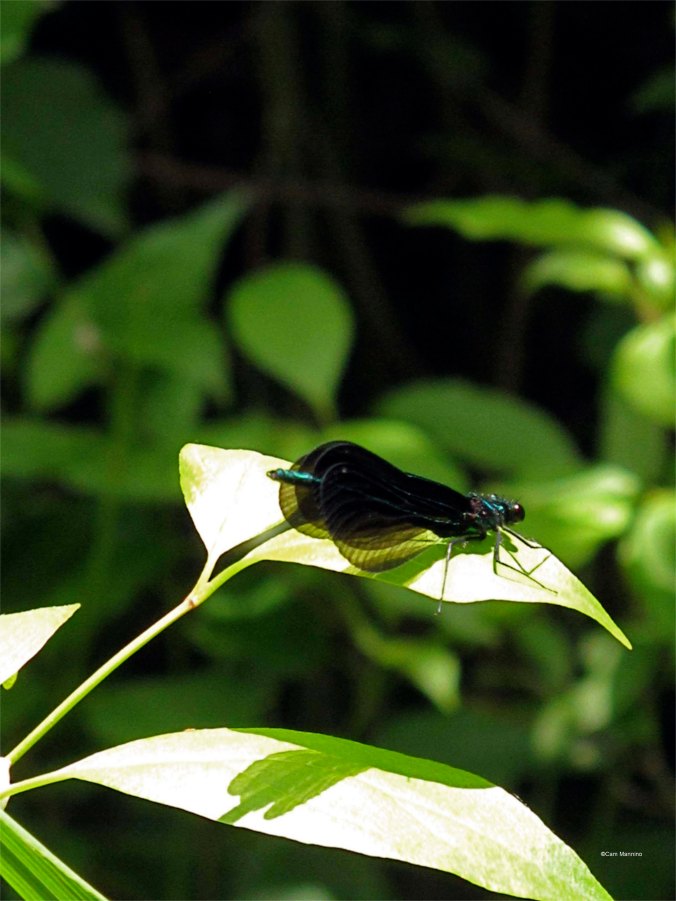 In mid-June, the beautifully-named Ebony Jewelwing Damselfly usually frequents the woods at the back of the big northern loop and the woods near the marsh.

And that humble little brown butterfly that appears all over the park in June?  That’s the little Wood Satyr (megisto cymela)  who loves to bask on tree leaves in the early morning and late afternoon sun. 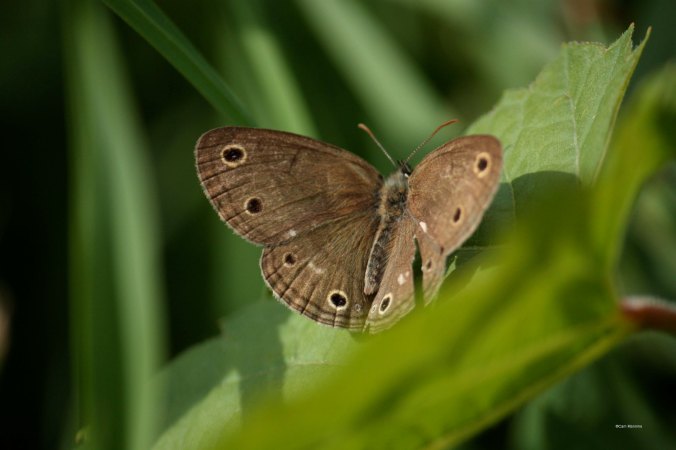 The little Wood Satyr basks on leaves in the early morning and late afternoon. Though it flutters among low plants, it can rise as high as the treetops.

So despite the rain this year, June rolls on, bringing on many more nectar-drinking butterflies and the flowers they love.  Let us know below what intrigues you on your next visit to Bear Creek Nature Park.

9 thoughts on “This Week at Bear Creek: The Chickadee’s Amazing Brain, and What’s the Deal with Non- Native Plants Anyway?”