Last week I took a side trip to Draper Lake with all its lavender flowers, fish and insects! Hope you saw the previous post. So now let’s get back to Bear Creek!

Have you noticed that a hush has fallen over the park?  Oh, you’ll hear the American Goldfinches who are raising young now, the Cardinal’s trill, the chipping of a sparrow, the harsh cry of a crow or maybe a flock of crows.  But many birds are beginning to molt, replacing their feathers for migration, singing less as they freshen up for autumn.  The eggs of butterflies and moths have hatched into caterpillars who are inching along host plant stems. Plants of all kinds are turning from flowering to “fruiting.”   And what are those human work crews doing at the park?  Summer begins to wane and change is still the norm at Bear Creek!

Freshening Up for Fall:  The Molt

According to the Cornell Ornithology Lab, birds’ feathers are like our hair or fingernails – hard structures that can’t repair themselves if they’re damaged. So birds periodically molt, which simply means they replace worn, damaged feathers with fresh ones.  Since this uses a lot of energy, most birds have a complete molt in late summer after they’ve finished raising their young and for migrating birds, before the fall migration .   Some birds – like warblers, tanagers and buntings –  do one full molt and then have a partial molt to change into their courting colors before breeding season. Others molt more often or only molt wing feathers.  So it’s a highly variable process.

Canada Geese (Branta canadensis) are big birds  with long feathers so molting takes time!  They remain in the reeds with their young in July and spend 30-45 days replacing their feathers before migrating.  They can be unusually quiet during this period because they are vulnerable; neither they nor their young can fly until the molt is over.  They must swim or walk to find food.  This photo, taken earlier in the summer and not at Bear Creek, shows an adult and young before their molt.

A Canada goose with young in late June, before they all start molting.

Others birds, especially smaller ones,  continue to be active during their molt. This Indigo Bunting (Passerina cyanea)  wasn’t hiding or quiet; he was singing at the top of a tree this week.  But  you can tell his head feathers aren’t the beautiful blue they were earlier in the summer and look a bit thin like a balding human male.  Male Indigo Buntings do a complete molt in August,  and then a partial molt in the spring to cover themselves with bright blue feathers and black wings for courting the females. To see all the stages of an Indigo Bunting’s molt, visit the Cornell Lab link above.

The chatty Gray Catbird (Dumetella carolinensis) tries to warn away intruders, like you and I, during the molt with the famous “miaow” call from which they get their name.  That call is everywhere in the park right now!  Here’s the sleek gray catbird before molting:

The secretive Gray Catbird goes deep in the bushes before its molt but it “miaows” if any intruder approaches, including those of us walking in the park!

And their “miaow” alarm call sounded like this on the west side of the northern loop trail last week.  I must have been quite close to the Catbird because it was a very insistent call! (Remember to turn up your volume!)

When nesting is over, Tree Swallows (Tachycineta bicolor) become very social and gather into flocks to molt and migrate .  This week a small group of them were swooping above the grass near the playground and chattering together, before landing in a dead tree near the Playground Pond.  Their migrating flocks can number in the hundreds of thousands!

Tree Swallows gather for their molt and their migration.

Field Sparrows (Spizella pusilla ) are always hard  for me to photograph.  I see them from a distance as they skulk in tall grass or low shrubs always moving out of sight just ahead of me as I walk.  So I was glad to get these two shots.  I’m not positive, but I think the first is a juvenile since it has the light streaks on its upper breast of a fledgling but the white eye ring and pink feet of an adult Field Sparrow.

A few days later, though, I saw this sparrow on the walnut lane at the center of the park, and from the condition of its feathers,  I think it may be a molting adult Field Sparrow.  Please, all birders feel free to set me straight, of course!

What appears to be a molting adult Field Sparrow – white eye ring, pink bill and general strangeness in the feathers!

After plants are pollinated and fertilized, they develop “fruit,” that is,  structures in or on which seeds mature and which disseminate that seed.  Fruits can fly through the air like maple seeds in their winged packages or cling like burrs for traveling or get carried away and eaten, like a ripe berry.  Some of the plants introduced in earlier blog posts are now “fruiting.” For example, remember Wild Senna (Senna hebecarpa) in the native bed by the shed? It’s flowering in the photo above and look at the “fruits” it’s formed now,  the long pods in the second photo.

The fruit, long seed pods, of Wild Senna in the native bed near the shed.

Delicate Enchanter’s Nightshade (Circaea canadensis)takes a different approach.  Its fruit has stiff hairs, like a burr, that can attach to animals’ fur or clothing.  The branches of these sorts of plants often bend downward in late summer, assisting in the process of reaching a passing fox, dog, whatever.  Below, the flowering plant and then its fruit: 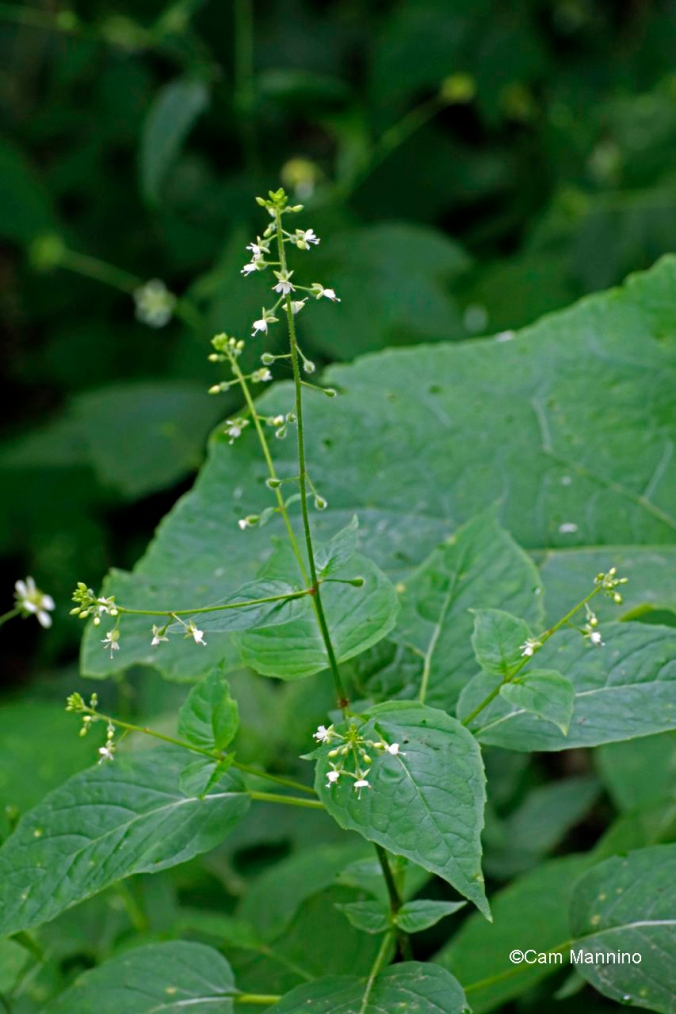 Enchanter’s Nightshade in its flowering stage. 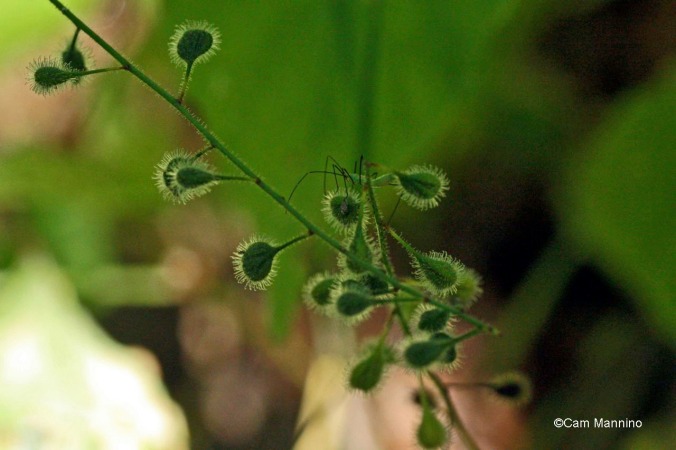 Enchanter’s Nightshade uses small burr- like fruits to transport its seed – fruits being explored here by a small spider.

And the familiar Common Milkweed (Asclepias syriaca) uses the airborne seed as we all know.  Right now the meaty, dusty-pink flowers are withering and the fertilized ones are developing  milkweed pods, the fruit within which its seeds are maturing.  When ready to go,  the dried pods will crack open and the airy silk, called coma, attached to each seed will take them sailing with the wind across the Old Fields.

The seeds inside the pods, or fruit, of the Common Milkweed are still maturing. When they’re ready, the pods will dry, open and the seeds will sail away on the airy silk attached to each seed.

Speaking of milkweeds, I’ve been trying to find a Monarch caterpillar (Danaus plexippus) munching on one for weeks to no avail!  Parks Commissioner Colleen Barkham tells me she has three in her garden!  I’m clearly just not being lucky enough to see this amazing stage of the Monarch’s life.  But here’s Ben’s photo taken last year along the Paint Creek Trail.  Pretty jazzy, eh?  That color, like the Monarch butterfly’s, tells predators that the milkweed has made it toxic.  Let me know in comments if and where you see one!  Please! 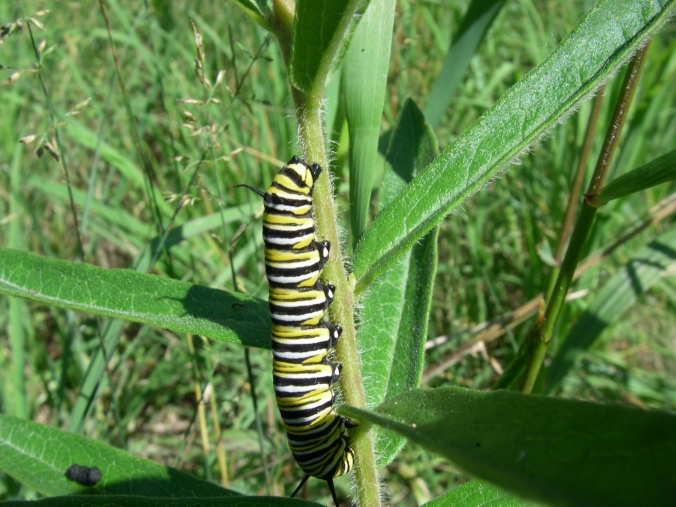 This monarch caterpillar is feeding on the orange-flowered butterfly milkweed. As the larva feeds on the milkweed, it gets toxic chemicals that it uses to protect itself from most predators.

The Milkweed Tussock Moth’s (Euchaetes egle) caterpillar wards off predators with soft spikes and the same yellow, black and white coloring as the Monarch caterpillar.  The moth, however, is a dull gray unlike the vivid colors of the beautiful Monarch.

The Milkweed Tussock Moth caterpillar is similar in color to the Monarch’s and both feed on milkweed, making them unpalatable to birds and bats.

East of the walnut lane, less appealing caterpillars,  Eastern Tent Caterpillars (Malacosoma americanum), have made their silk web in a tree which they will partially defoliate as they feed. The tents are pretty amazing, though.  According to Wikipedia, “the tent consists of discrete layers of silk separated by gaps and the temperature in these compartments varies markedly. Caterpillars can adjust their body temperatures by moving from one compartment to another.”  They gather in a sunny compartment on a cool morning as in the photo below,  but move into  shadier ones to escape hot afternoon sun.

Eastern Tent caterpillars gather in warm compartments of their tents on cool mornings, but move to shadier parts of the tent during hot afternoons.

And what about those human changes?

Bear Creek Nature Park is benefiting from two great projects. The Parks Commission’s maintenance crew repaired and upgraded a bridge on the southern edge of the Oak-Hickory forest in the northwest park of the park.  Now we have a beautiful, sturdy new bridge over the wetland area with a ramp to take you safely down the north side.  Thank you maintenance crew (Doug Caruso, Jeff Johnson, Clif Selent, and Lou Danek)!

The Parks Commission’s maintenance crew repaired an old bridge and upgraded it with a new ramp and railings. Check it out on the southern edge of the Oak-Hickory forest in the northwest part of the park.

Near Snell, Oakland Township Stewardship Manager, Ben VanderWeide, and his summer technicians spent a couple of hot, dirty but productive afternoons clearing a large area east of the pavilion near the Snell parking lot. 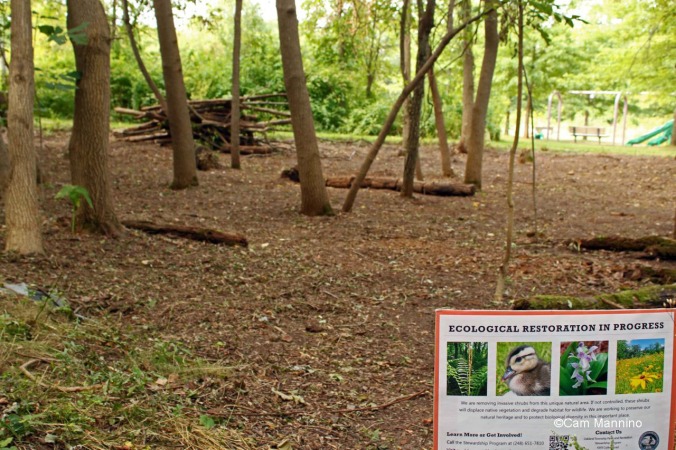 A 60′ x 60′ area cleared by the Oakland Township Stewardship crew for a new native plant bed.

A generous citizen,  Nancy Parmenter,  has donated all the native plants she cultivated in her carefully tended garden for 20 years since she is moving and the new owners didn’t want them!  In the fall, Ben and others (the technicians will be back at college) will dig up over 30 different native species and transplant them into this newly cleared area.  What a treat to have a free, HUGE number of native plants for a new Bear Creek bed. Thanks crew and Nancy Parmenter! If you want to help with the transplanting effort,  just let us know!

Right now, areas of the park are draped in the white of Queen Anne’s Lace.

The western side of the park draped in the white of Queen Anne’s Lace.

But shortly, the park will blaze with gold.  Goldenrod will take over the Old Fields.  The most prominent variety in the park, Canada Goldenrod (Solidago canadensis) is on the right in the photo below.  But it’s accompanied by other varieties as well, like  Grass-leaved Goldenrod (Euthamia graminifolia)  on the left.

By the way, Goldenrod, despite its “bad rep,” is probably not the cause of anyone’s fall allergies. Goldenrod’s heavy pollen can’t travel far on the wind.  The culprit is more likely Common Ragweed  (Ambrosia artemisiifolia) which blooms at the same time and whose pollen can be carried 40 miles on the wind!  Here’s a link to a photo of Ragweed.

Goldenrod spreads through rhizomes, underground stems that produce roots and shoots. In fact,  this native plant has become an invasive species in Germany and China !  How’s that for a reversal?  But here it provides lots of late summer pollen for bees and other pollinators and a golden glow as summer turns to fall!  Coming soon to an Old Field near you!

So in the hot, dog days of summer, Bear Creek keeps changing, making room for freshened-up birds, butterfly metamorphosis, seeds for next year’s flowers and a new native bed.  A reminder to us humans that change is inherent in nature as well as in our lives – and that’s a good thing!