Nature is always full of great little surprises.  This week again, nature sprung a few on me – the unfamiliar appearance of a familiar bird, a sky full of dragonflies, and a park visitor who has touched the soft fuzz on a sleeping bee!

But the predictable is comforting, too. Queen Anne’s Lace has begun sharing the Old Fields with tufts of Goldenrod, all of them swaying and dancing in the wind.  Glorious days for a walk in Bear Creek! 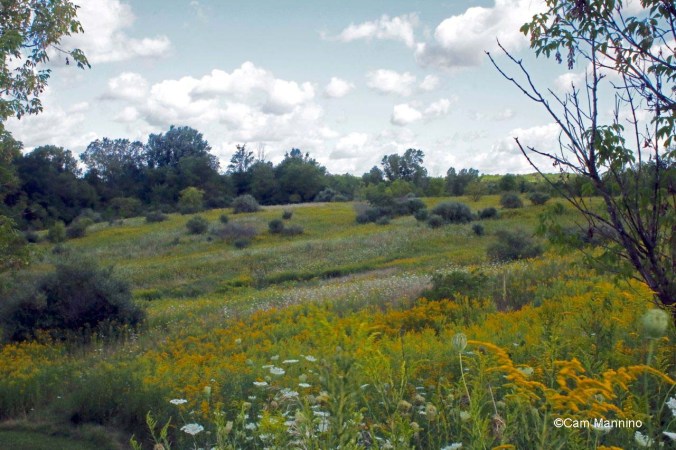 An Avian Surprise (at least to me…)

The molt that I discussed last week continues.   Groups of young House Wrens (Troglodytes aedon) are still hiding in bushes within the park, waiting for the fall migration.  You can hear their persistent scolding as you walk by .

Groups of young wrens hide in bushes around the park, waiting for the fall migration.

An Eastern Kingbird (Tyrannus tyrannus) hopped restlessly in a bare tree looking south, as if dreaming of his winter home on the Amazon. 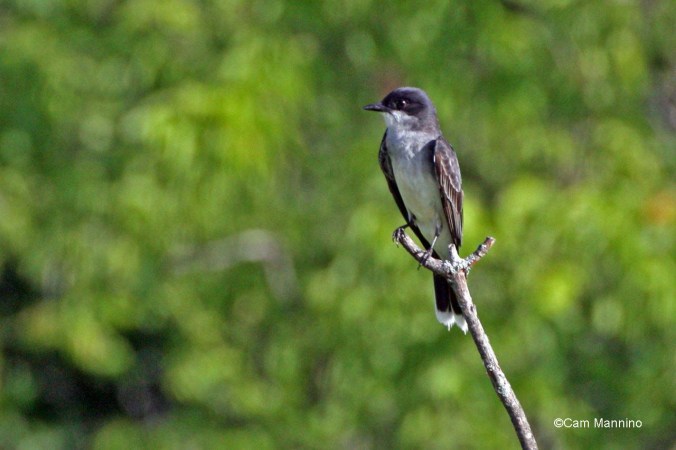 An Eastern Kingbird looking south as if dreaming of his winter home on the Amazon.

But here’s the SURPRISE!  Now does this look like a male Mallard (Anas platyrhynchos) to you?

A male Mallard in its “eclipse plumage” after the molt.

If so, congratulations!  It didn’t to me.  This is actually what the glamorous green-headed male Mallard looks like after his mid-summer molt.  It’s called “eclipse plumage. ” The flight feathers are molted at the same time,  so during the molt, he was temporarily flightless.  Courtship for Mallards begins in the fall,  so in a few weeks the reddish- brown head feathers will be molted again into the brilliant green the male needs for attracting his mate.  The clue to gender in mallards, by the way, is the bill,  which is olive green/yellow in the male and orange with black in the female.  Eclipse plumage!  Who knew?

A Surprise in the Woods:  Green Rain!

Last Sunday, entering the Oak-Hickory woods, my husband and I began to hear what sounded like raindrops, pit-patting around us in the leaves and on the ground.  Puzzled, we finally realized that small green chunks were raining down on us. High in a Red Oak (Quercus rubra) sat a black squirrel.  Here’s one NOT at the top of a tree! 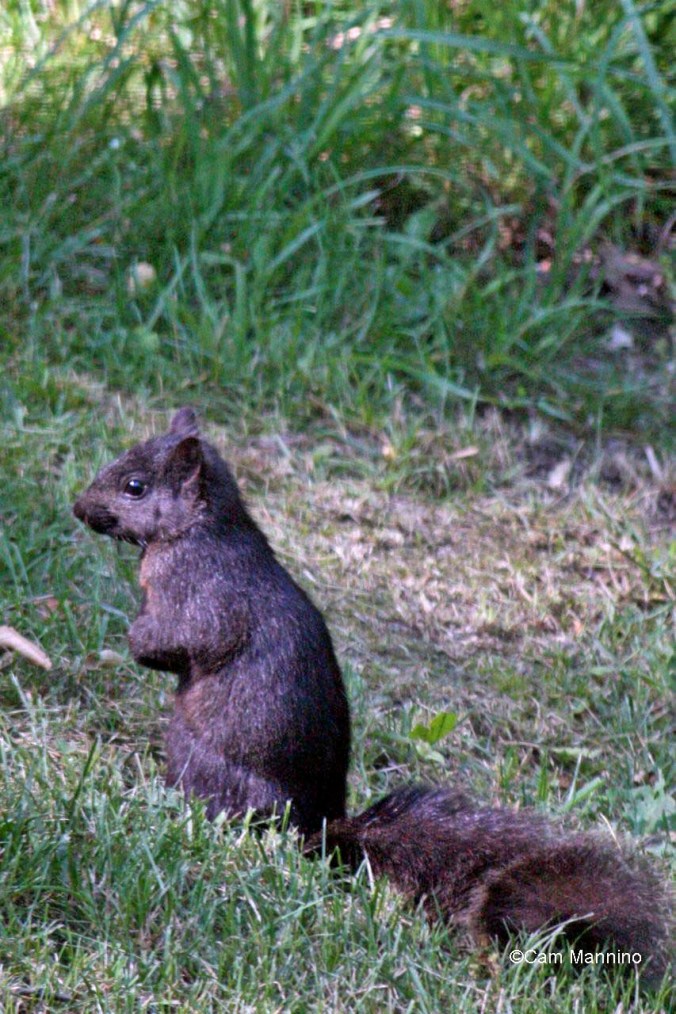 This squirrel is a probably a black Fox Squirrel rather than a black Gray Squirrel since it is not pure black.

Black squirrels are just a color variant of the Eastern Gray Squirrel (Sciurus carolinensis) or the Fox Squirrel (Sciurus niger). Of course, the Surprise –  “green rain” –  was a  shower of green acorn pieces that lasted several minutes as the black squirrel munched high above.  It took us a minute to catch on and we had a good laugh. Here’s an un- chewed Red Oak acorn; the mature ones are nut-brown.

The source of the “green rain,”  pieces of Red Oak acorn, fell around us from the munching of a black squirrel high above.

Another small surprise:  According to Wikipedia, North American squirrels were mostly black before Europeans came here, because forests were huge and shady and being black offered protection against predators and the cold.  With deforestation, the gray and brown varieties flourished. Now black squirrels are appearing more often in northern areas that have colder winters.

A Surprise in the Air:  A Swarm!

A squadron of about twenty-five darners (genus Anax), large dragonflies, swooped and dove over the western Old Field on Sunday, looking like Harry Potter in a quidditch match. Quite a surprise, since we’d never before seen more than two or three darners at a time in Bear Creek.  Probably we were seeing a feeding frenzy since lots of insects were foraging on abundant wildflowers below.    I only managed to photograph  6 in this one small section of the sky.

Squadron of darner dragonflies over a field full of insects.

According to an article by Michael L. May in the Journal of Insect Conservation, some dragonflies, including some (but not all) Green Darners (Anax junius), annually migrate in huge swarms, traveling “hundreds to thousands of kilometers north to south.”   Really?  Another small surprise for me!  I wonder if this squadron will migrate with a larger swarm? See Green Darners in an earlier TWBC post.

So what was in the fields below the darner swarm?  Despite the hush from the molting birds, Bear Creek is humming with insects.  The Carolina Grasshopper (Dissosteira carolina), now full grown ( see the nymph in the July 30 blog),  makes a dry whirring sound as it flies short distances along the trail on its dark wings. It also sings, or stridulates, by rubbing  its rasp-like hind leg against its forewing . 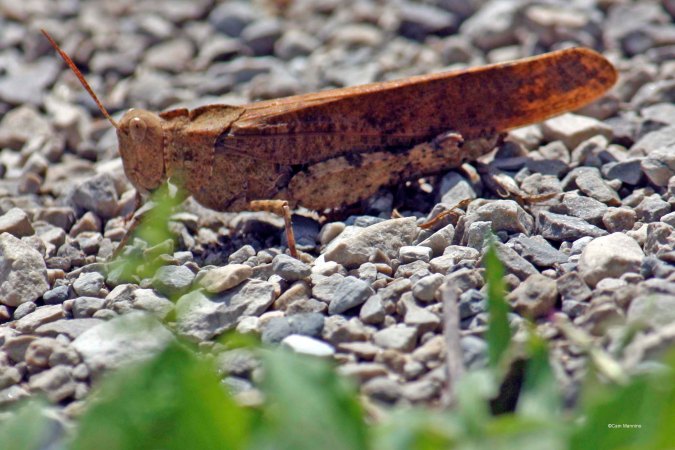 The Carolina grasshopper now has its copper color and makes short flights along the trail with its dark wings.

Most of the Red-Legged Grasshoppers (Melanoplus femurrubrum) are developing a bit later than usual this summer.  So this male nymph will need to molt into an adult before we hear it singing in September.

This is a late summer nymph of a Red-Legged Grasshopper who probably has not starting “singing” yet.

Grasshoppers have short antennae.  Crickets and katydids have lo-o-o-ng ones!  Here’s a female Shieldback Katydid (genus Atlanticus) that may be contributing to the hum in the fields or at the edge of the woods.  Look at the length of both her antennae and that very long ovipositor with which she lays her eggs.  (Hint: it looks like a tail.)

A Shieldback Katydid with the long antennae of all katydids and a very long ovipositor with which she lays her eggs.

Annual Green Cicadas  (Tibicen canicularis) drone in the trees, looking like some sort of alien.   (This one, however, was handily on our garage door!)

The drone of the Annual Green Cicada is part of the familiar late summer hum.

Last weekend, bees buzzed from flower to flower in the western Old Field, balancing gracefully on the stems.  Another recent surprise for me was learning that the common Honey Bee (Apis mellifera) is a non-native brought here from Europe in the 1600’s.  Here’s one with the “pollen baskets,” (corbicula) on her hind legs bulging after foraging among the goldenrod. 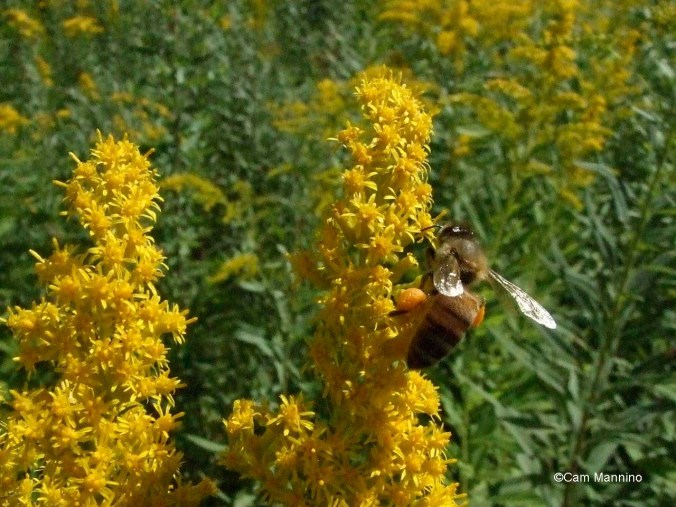 A Honey Bee, a non-native bee,  fills the pollen baskets on its hind legs as it forages on goldenrod.

As you’ve no doubt heard, Honey Bees have fallen on hard times, suffering from  multiple causes of  “Colony Collapse Disorder.” So it’s great to see them buzzing in the sunlight on so many late summer flowers in Bear Creek.

And speaking of bees…

One of the pleasures of being a Volunteer Park Steward is meeting so many other people with nature knowledge and experience.  A kindly woman named Mavis told me this week that she sometimes sees our native Bumblebees (Genus Bombus) sleeping under Goldenrod fronds or leaves at sunset.  She said she very gently reaches up the palm of her hand and touches their fuzzy bodies! Imagine what that might feel like!

I’ve read since then that a sleeping bumblebee is probably a drone, a male.  The female workers generally return to the hive at night to feed the queen, other workers and the larvae (baby bees). Males don’t even have leg baskets for gathering pollen.  They simply buzz about feeding themselves (thereby pollinating plants) and wait for a chance to mate with the queen – so they have no need to return to the hive.

So now I have another new goal – to feel the fuzz on a sleeping bumblebee.  The female Bumblebee worker below is filling her pollen basket by burying herself in a plume of Meadowsweet (Spiraea alba) in one of the native flower beds.

A female bumblebee is almost buried in Meadowsweet as she fills the pollen baskets on her hind legs with its pale pollen.

The native beds near the shed are full of tall yellow flowers – in fact four different ones! Thanks to Stewardship Manager, Ben VanderWeide, I’ve learned to distinguish between these giant beauties rather than seeing just “tall yellow flowers.”  It seems that these plants, like the asters,  have “composite flowers,” i.e.,  each apparent “petal” is actually a separate ray flower (or floret) and at the center are the disk flowers with a seed attached to each.

I’ve featured one of the yellow giants before, Prairie Dock (Silphium terebinthinaceum). It’s super tall, up to 10 feet,  with a composite flower, ball-shaped buds on bare stalks and GIANT leaves near the ground.

Prairie Dock can grow to up to 10 feet high and features ball-shaped buds and huge leaves right at ground level.

Another I’ve mentioned before, False Sunflower (Heliopsis helianthoides) also has a composite flower.  It grows about 8 feet high with leaves along the stalk. Here you can see the disk flowers in bloom. 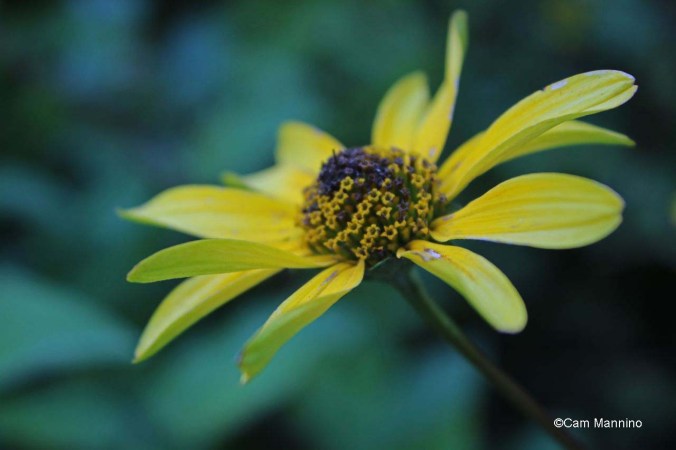 The disk flowers at the center of this False Sunflower are in bloom.

Then there’s the characteristic drooping ray flowers of the Cut-Leaved Coneflower (Rudbeckia laciniata)  that grows 6 to 8 feet high. Here a bumblebee has its proboscis in one of the tube-shaped disk flowers. 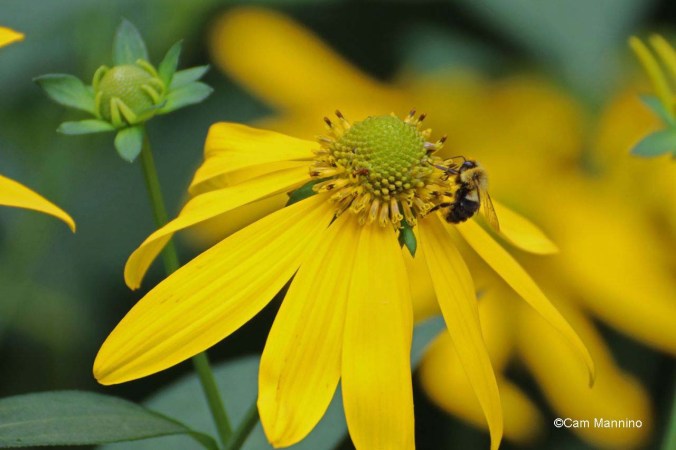 Cut-leaved Coneflower with a bumblebee enjoying the disk flowers.

And rounding off the group of yellow giants is  Tall Coreopsis (Coreopsis tripteris) which grows 3 to 9 feet tall.  Obviously, Honey Bees and Bumblebees love them, too!

While we’re discussing native giants,  have a look at  the big tufts of Big Blue Stem (Andropogon gerardii) which are now showing the pronged seed heads which gave this tall prairie grass its other name, Turkey Foot.  I remember walking through a field on Lake George Road as a child with these giants towering over my head.  So it’s great to see them back again since the prescribed burns in Bear Creek!

Big Blue Stem, a native prairie grass that can grow 10 feet tall,  has reappeared in the park since prescribed burns.

The purples and lavenders of native Asters are beginning to appear in Bear Creek.  Here’s this year’s first glimpse of three that will be much more prolific in the coming days.  Asters, like the yellow giants above, all have composite flowers as well.

The first dark purple New England Asters of 2015 with their composite flowers.

Smooth Asters (Symphotrichum laeve) on the western sloping path are lighter lavender and have a more delicate look than the New England Aster. 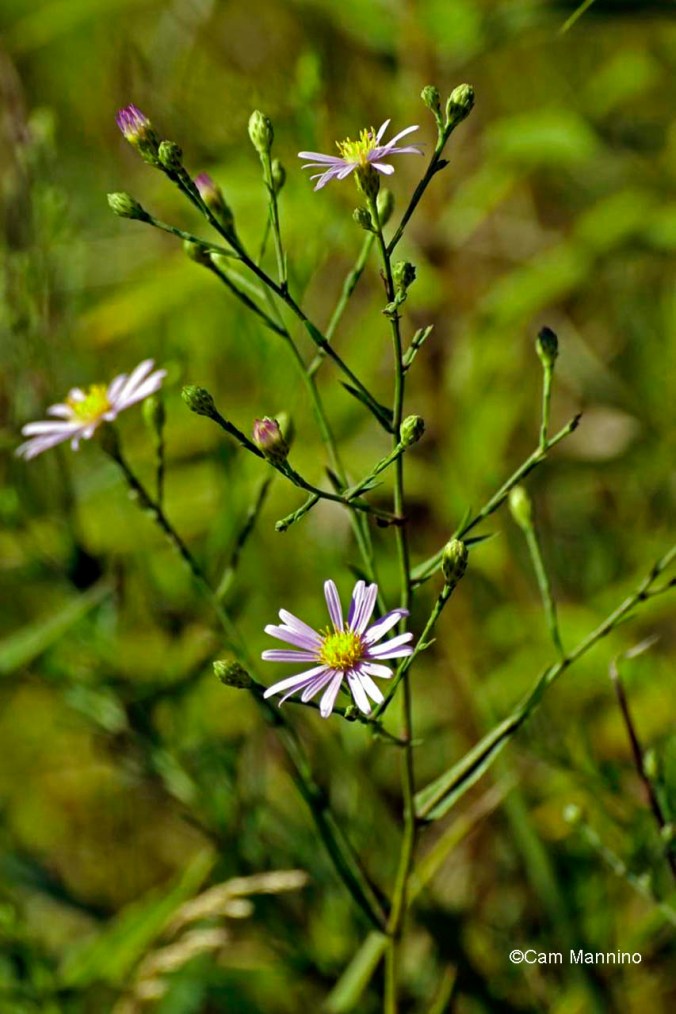 The more delicate, lavender Smooth Asters have “petals” that are really individual ray flowers with disk flowers at the center.

And finally, I believe these are Panicled Asters (Symphytrichum lancelotaum) with small, white to  lavender ray flowers and yellow to lavender disk flowers.  My wildflower experts will check on this for me next week.

The small Panicled Asters have whitish lavender ray flowers (petals) and yellow or lavender disk flowers at the center.

The striking red Cardinal Flower is almost done for the year.  If you have time, take the path that leads north from the playground and have one last look on the southern side of the marsh boardwalk that’s on your left a short way down.

The Cardinal flower is finishing its gorgeous red bloom near the marsh north of the playground.

So, if you like Surprises,  nature always obliges – especially at Bear Creek Nature Park. Literally, never a dull moment!

One thought on “THIS WEEK AT BEAR CREEK: Small Surprises as Summer Wanes”