This week we’ll leave the sunny Old Fields and spend more time in the north of the park where there’s more water and shade.  The marsh, like so much of the park, is now full of gold as fall flowers bloom along its margins. The Canada Geese are starting to emerge from the reeds with completely new sets of feathers.  The Snapping Turtle still cruises just beneath the water’s surface while dragonflies hover and soar above it.

In the pond  at the edge of Gunn Road, a few frogs hop between the toes of giant wet-footed trees,  while others sit quietly contemplating the coming season.  Squirrels and chipmunks gather acorns and nibble at colorful mushrooms that  mysteriously appear and disappear in the Oak-Hickory forest.  Let’s watch how the north end of Bear Creek settles gracefully into early fall.

The Marsh – All Golden and Green

The green of the marsh – its reeds, its duckweed-covered water, the backdrop of trees – is suddenly offset by the bright yellow of Nodding Beggar-ticks (Bidens cernua), another lovely native wildflower with a singularly homely name!

In September, golden flowers with the strange name of Nodding Beggar-ticks surround the northern marsh.

These sunny flowers surround the water in the marsh, lining the northern dock and the edge of the reeds in the distance. Dr. Ben tells me that they are an annual that “can grow from a seed to a big flowering plant in just a few short months or weeks after the water recedes. They are really well adapted to the changing water levels of wetlands!”  Look at these flower faces which are currently full of bees!

Bees are constant visitors at the oddly-named Nodding Beggar-tick plants in the northern marsh.

Nodding Beggar-tick are native flowers that nod a bit as they age.

The reeds and flowers are a great backdrop for the Canada Darner dragonfly (Aeshna canadensis), who likes to hover above the water searching for insects,  just as it does above the wildflowers in the Old Fields.

A Canada Darner finds the air above reeds and marsh flowers just as profitable for finding insects as the wildflowers in the Old Fields.

The Common Cat-tails (Typha latifolia) take on all kinds of strange shapes as they produce seed for next year. The male part at the top has fertilized the brown fuzzy female part below to produce seeds.  And cat-tails also grow by rhizomes, or underground stems. 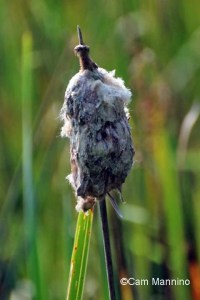 Out in the water are the usual inhabitants.  If you come after a rain has cleared some of the surface plant life, you might see the ridged back (or carapace) of a Snapping Turtle (Chelydra serpentina).  Its head  emerges several inches ahead of its body as it cruises leisurely across the marsh, stopping to dip down and feed on submerged vegetation. 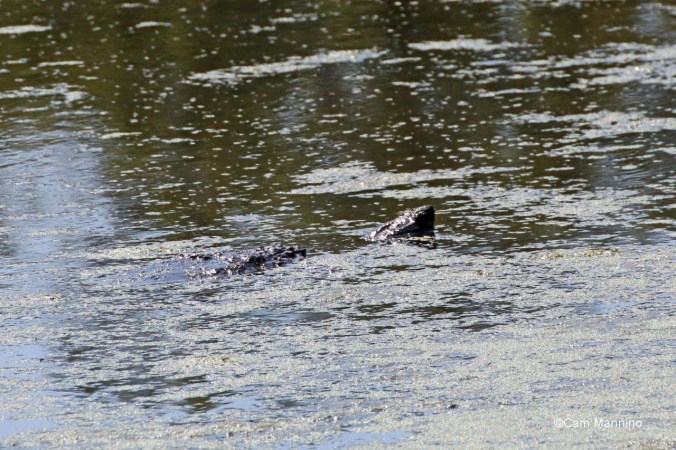 A Snapping Turtle moving slowly and deliberately across the marsh, stopping to eat submerged vegetation.

Of course, if you come on a hot, sunny afternoon when the duckweed and other surface plants crowd the marsh surface, you’ll have to look for  the trail of  two slowly moving blobs of green.

On a sunny day with the surface plants thick and rich, look for the Snapper’s water trails to find the slowly moving green blobs of its shell and head.

If the sun is warm on a cool fall morning, you might see a small Painted Turtle (Chrysemys picta) sunning itself, all four legs, head and tail extended to soak up maximum warmth. 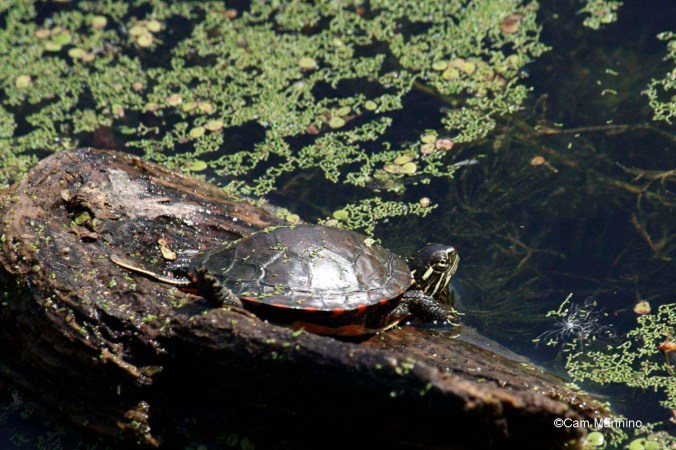 A small Painted Turtle suns on a log, all four legs stretched out to catch the sun’s warmth.

Some of the Canada Geese (Branta canadensis ) have now finished their molt.  This one seemed to be waiting for other family members to emerge from the reeds.  When they do, they’ll get some practice flying with their completely new feathers, wheeling about the sky and calling noisily.

A Canada Goose seems to be waiting on the edge of the reeds for the rest of its family group to finish their complete molt.

I’ve noticed this plant in the marsh for a while and finally learned its name.  Ben tells me that it’s Nodding Smartweed or Willow-weed (Persicaria lapathifolia).  It’s common in moist, disturbed ground.  I quite like its graceful droop! 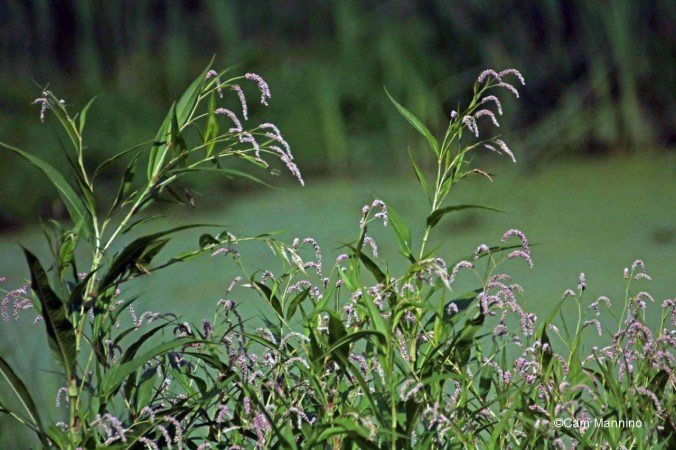 Nodding Smartweed (or Willow-weed) droops gracefully in the muddy flats at the edge of the marsh.

The Pond at the North End:  Mighty Trees, Their Munched Acorns and Small Frogs

If you wander away from the marsh toward Gunn Road, you’ll end up at another much quieter pond.  It’s the one in which so many Wood Frogs (Rana sylvatica) were courting in the spring. Some of these frogs breed more than once which might explain seeing two tiny Wood Frogs near the pond at this time to year. Wood Frogs can vary their skin color from brown to green/gray but they are always in or near the trees (as their name implies) and sport a dark eye mask. 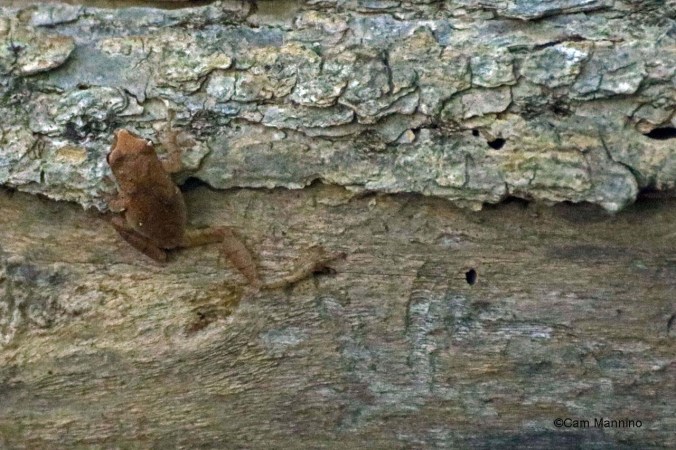 A tiny Wood Frog in its  brown color stretches out a hind leg to cling to a log.

A tiny Wood Frog in its green color  on a Bur Oak leaf near Gunn Road.

Nearby, as the sun dipped low, a male Green Frog (Rana clamitans) sat quietly on the end of a log, staring steadily into the distance.  It’s rare for me to see one so still and silent. 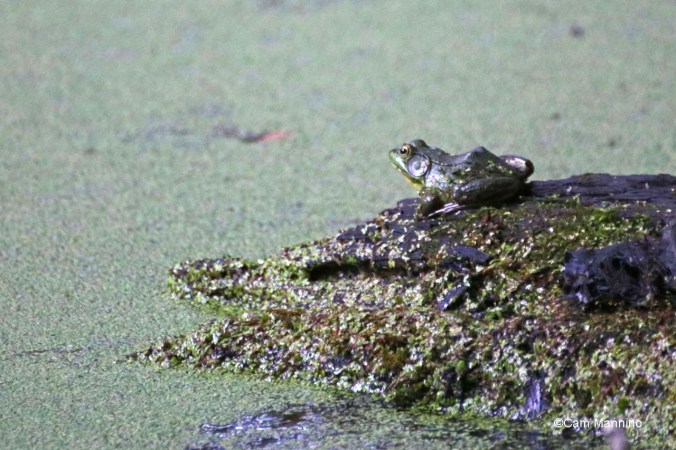 In the late afternoon, a male Green Frog stares quietly into the distance from a log in the pond near Gunn Road.

An Orb Weaver Spider (family Araneidae) had rather daringly hung its web out over the water, attaching it to four different trees quite a distance away.  It looks as though it managed to snag a moth.

An Orb Spider web suspended between four trees over the pond near Gunn Road.

Some creature had dug a fairly large hole, with accompanying small ones, at the roots of a gigantic Bur Oak (Quercus macrocarpa). An Eastern Chipmunk (Tamias striatus) perhaps?   Here you can see one hole beneath a Bur Oak leaf and the remainder of the tree’s acorn with its bristly cap laying nearby.  Bur Oaks, a member of the White Oak family,  don’t produce large acorn crops every year.  Instead, they produce huge numbers of acorns some years in the hope that the squirrels and blue jays will not be able to eat them all and a few will survive to propagate new trees.

Here’s a clearer look at the acorns from a Bur Oak that’s just south of the shed near Snell Road.

The acorns of a Bur Oak with their bristly caps

But the one at the north end is very tall – and incredibly straight – with its crown so far up that you can’t see its acorns even with binoculars!  Or at least, I couldn’t. 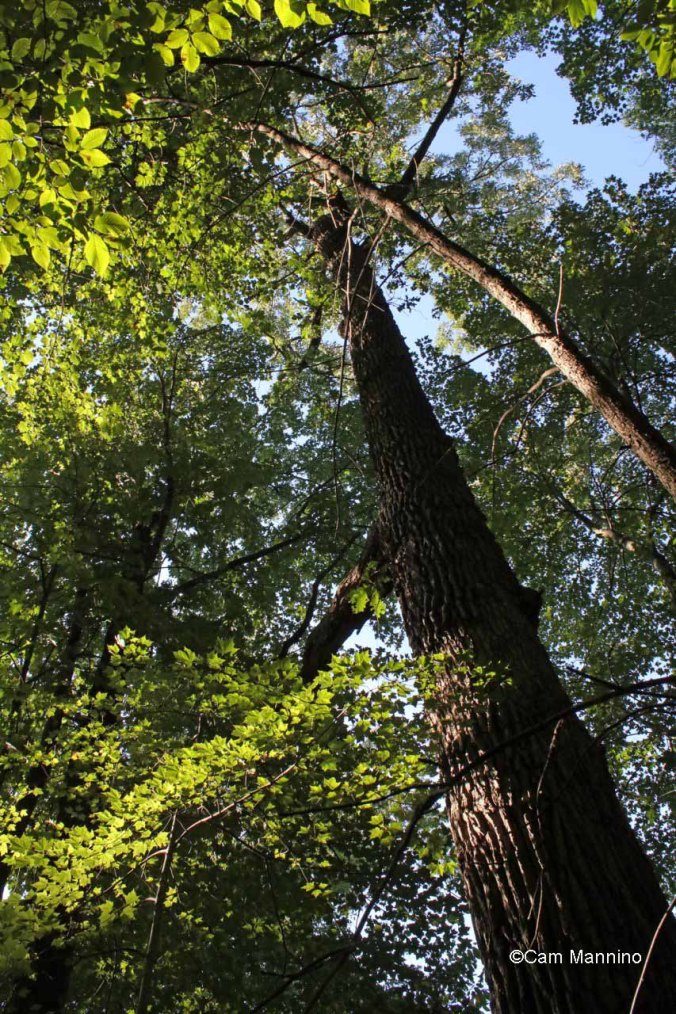 A very tall Bur Oak near Gunn Road with its straight trunk and branches only at the crown.

Eastern Chipmunks (Tamias striatus) are certainly dashing about the park collecting nuts and seeds to put in the storage chambers of their burrows.  This one started filling its pouch near the Center Pond in a previous fall. 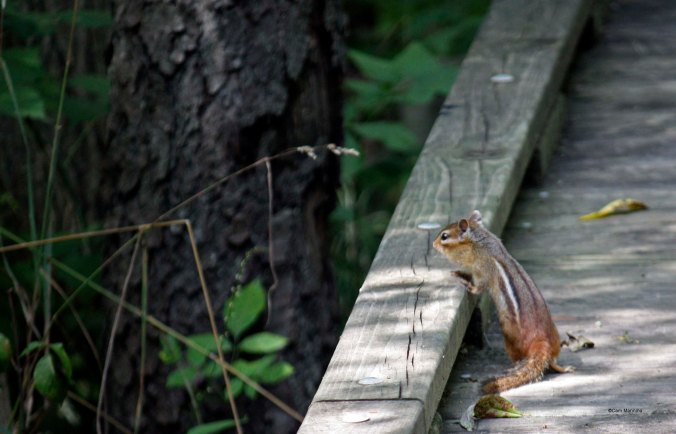 The Oak-Hickory Forest and its Mysterious Mushrooms

The Oak-Hickory forest is blooming – with colorful mushrooms! I learned this week that there are fungi in the earth beneath those trees year ’round. Right now we can see parts of those fungi because they’re making spores above ground in what we commonly call “mushrooms.”

Some fungi break down dead materials to obtain nutrients.  Other fungi form relationships with living plants, including trees,  which generally are mutually beneficial.  This symbiotic association between a fungus and a living plant is called a mycorrhiza.  Mycorrhizal fungi feed on sugars from tree roots and trees in turn can get more minerals and water from the soil through their fungal partner.  According to BBC Earth, some scientists have shown that trees use this system to share nutrients with other trees, including their own saplings, in what some scientists refer to as the “wood wide web!” This web may include both the fungal network and tree roots that are actually grafted together.  I love this idea. Of course,  problems can spread through this web too ( just like our internet!) which is why we published the blog on preventing the spread of Oak Wilt.

Having missed the Parks mushroom workshop last weekend, I can’t identify most of the mushrooms I’ve seen lately. (Drat!)  They look so other-worldly and fascinating. Unless accompanied by a real expert who can make an absolute identification, though, please don’t try to eat them!  Wild mushrooms are notoriously difficult to identify and many are toxic to humans. And in any case, it’s always best to leave the park just the way you found it so we can all enjoy its beauty and surprises.

This amazing mushroom, which may or may not be a Sulfur Shelf mushroom, glowed in the dappled light of the woods.

This mushroom, which might or might not be a Sulfur Shelf mushroom, glowed in the dim forest light.

Several of these pale orange mushrooms emerged from the wet soil near the pond at the Gunn Road entrance. 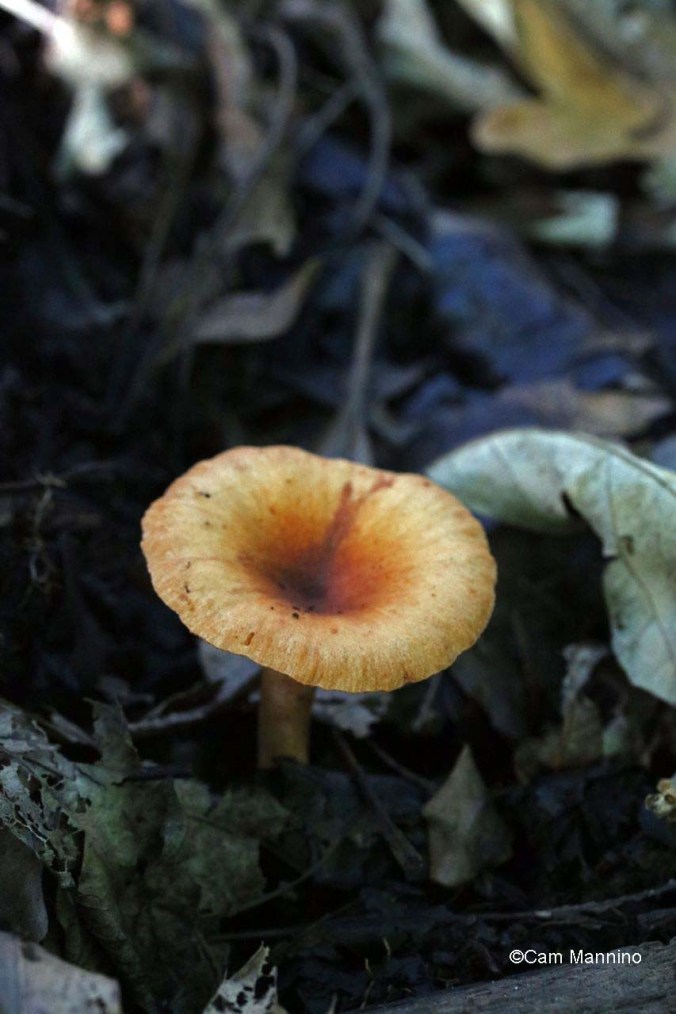 Pale orange mushrooms like this one appeared in the moist soil near the pond by Gunn Road.

Some animal’s taken a nip out of this little one. 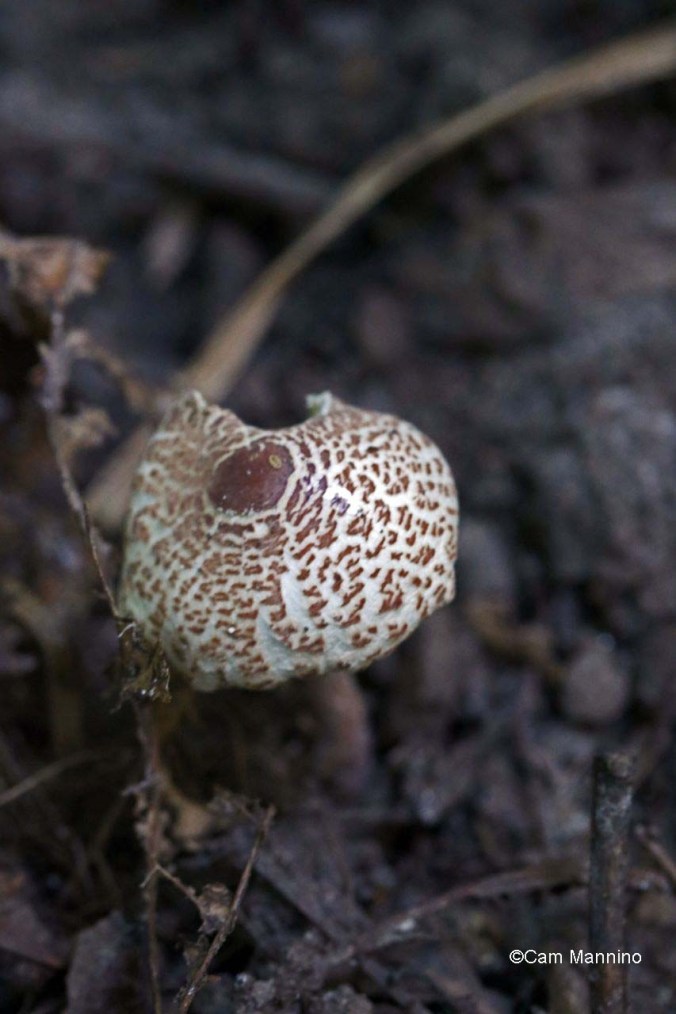 Some animal’s tried a nip of this mushroom which may or may not be a Reddening Lepiota.

Someone’s been eating these red mushrooms, too. 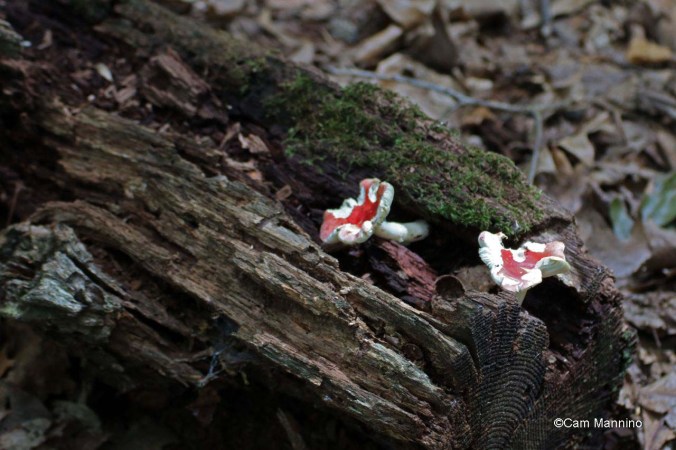 These unidentified mushrooms may have been eaten by some small woodland animal, perhaps the American Red Squirrel.

One of the likely consumers of mushrooms in the forest is the  American Red Squirrel (Tamiasciurus hudsonicus) which can safely eat some that are toxic to humans. 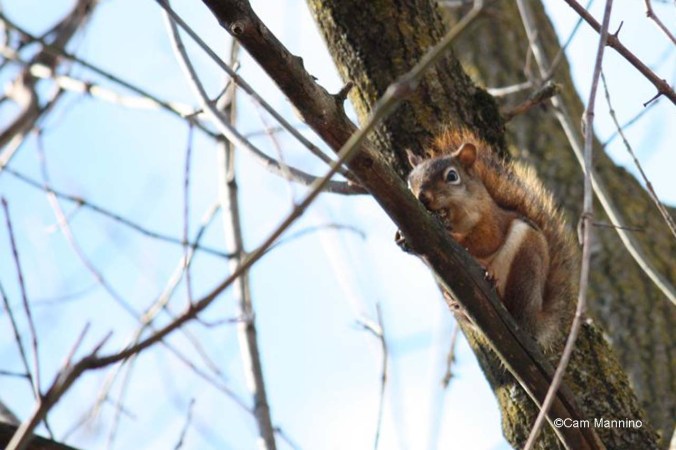 The American Red Squirrel can eat mushrooms that are toxic to humans.

Speaking of “fruits,”  the Pasture Rose (Rosa carolina),  seen in early summer on southern end of the western forest path, has left a lovely fruit, known as a “rose hip.”

A Pasture Rose has fruited, leaving a “rose hip.”

Bear Creek offers so much variety – the buzz and sway of the meadows, the shady walnut lane, the small ponds, the big, wild marsh and the dappled light of the woods.  A niche for every mood.  Hope you find the time to sample  some of them soon!