Before European settlement, our special area of Michigan was actually an Oak Savannah with large expanses of tall waving grasses, 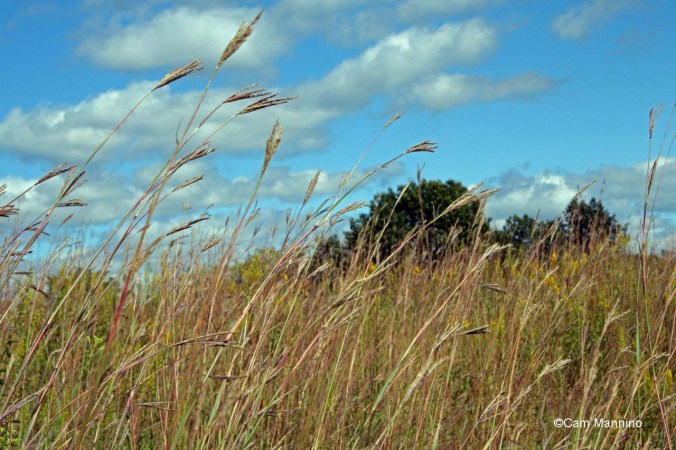 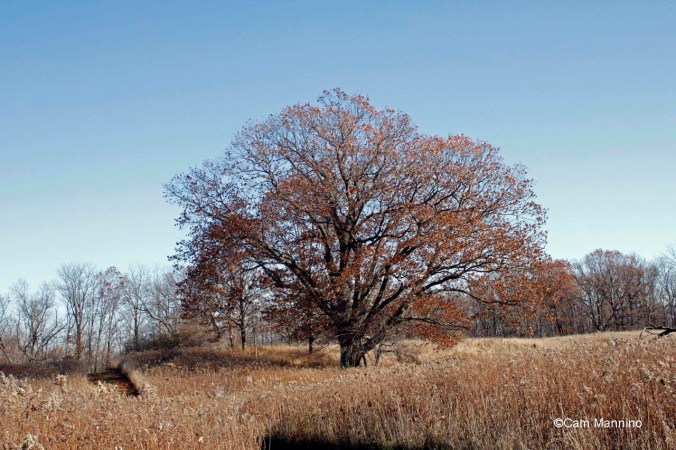 and other native trees, shrubs and prairie wildflowers.  During the spring and summer, ground-nesting birds like the Northern Bobwhite Quail  (Colinus virginianus) settled among tall grass stems, producing young.  Bobolinks (Dolichonyx oryzivorus) sang their burbling song while swaying on grass stems.  The Eastern Meadowlarks (Sturnella magna) whistled their slow song from perches in low shrubs.  Later, in the 1800’s, non-native game birds like Ring-necked Pheasants (Phasianus colchicus) were introduced and took advantage of the tall grass for cover.

On November 14 and 15, Oakland Township’s Stewardship Manager, Dr. Ben VanderWeide, took a huge step forward in prairie restoration on  20 acres of Draper Twin Lake Park and another 18 acres in Charles Ilsley  Park.  The hope is that residents will  be able to experience the land as it may have looked before and that native residents – birds, animals, grasses, wildflowers, shrubs and trees of the prairie – can return, adding more rich diversity to the plants and wildlife of Oakland Township.

The process began in the summer of 2014 as crews working with Dr. Ben began removing the non-native and invasive species that had taken over the land after farming had ceased.  This meant long hours of cutting woody invasive trees and shrubs like Autumn Olive, Multiflora Rose and Glossy Buckthorn which had quickly colonized the open land, and then treating the stumps to prevent re-growth.  The process continued this summer until one beautifully rolling 20 acre field was finally prepared for planting in Draper Twin Lake Park. 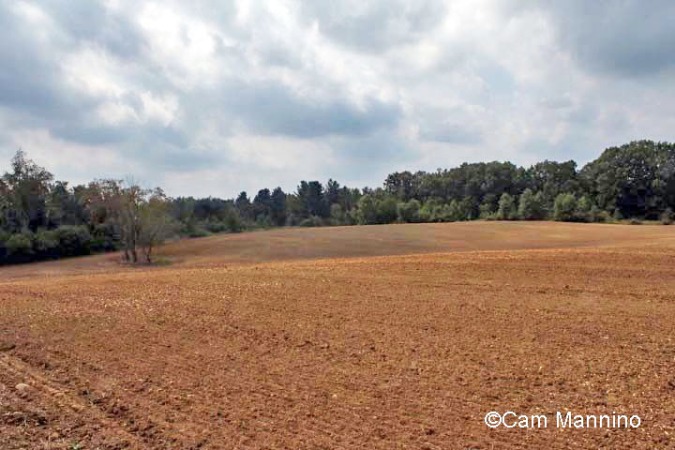 Two other rolling fields of 5 and 13 acres at Charles Ilsley Park were also cleared and prepared.(Click on double photos for larger view.  Rest cursor on photos for captions.) Two more 15 acre fields are being prepared for planting in 2016 and 2017. 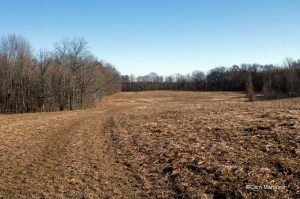 13 acres about to become a prairie at Charles Ilsey Park 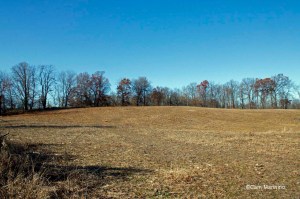 Just part of another 5 acres about to become a prairie at Charles Ilsely Park.

Dr. Ben sought out a U.S. Fish and Wildlife grant to purchase wild seed for these areas and then carefully selected a list of plants suitable for our specific sites. Township residents will need to be patient, since prairie flowers spend their first two to three years putting down deep roots. These deep roots help prairie plants survive drought conditions or fire to which they became adapted over thousands of years of fluctuations in climate and periodic fire.  In fact, carefully controlled prescribed burns will be used periodically on these prairies in the future because regular burning helps native plants thrive and thwarts non- natives who are not adapted to it. Some native plants even require fire in order to bloom!

A few flowers will begin to appear next spring, but the prairies should really start blooming vigorously by the spring and summer of 2018.  Here are just a few of the prairie grasses and wildflowers that will be gracing our prairies then. (Click on photos to enlarge them and hover your cursor over the photo for plant names.) 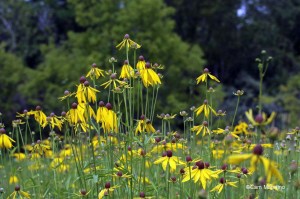 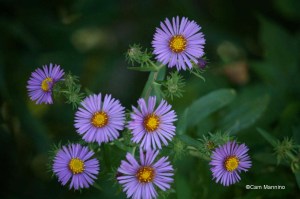 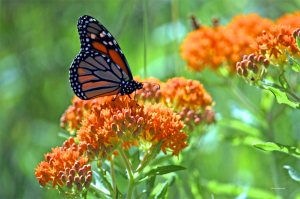 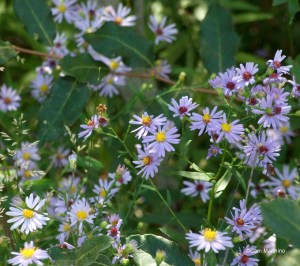 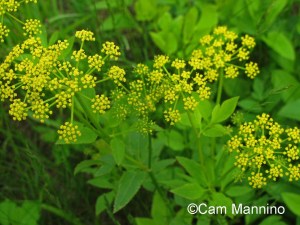 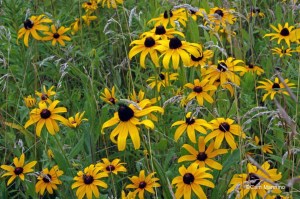 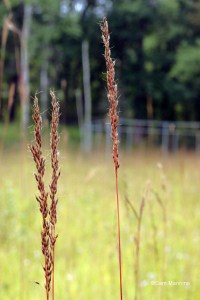 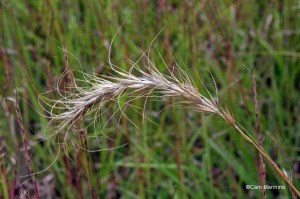 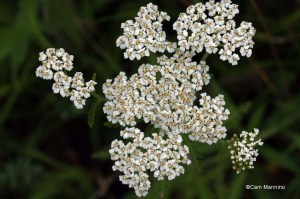 Along with these more familiar native plants, Dr. Ben also included grasses and flowers that used to bloom here but that we see less often now. Click on these links to see Foxglove Beardtongue (Penstemon digitalis), Wild Lupine (Lupinus perennis), and Sky-blue Asters (Symphyotrichum oolentangiense).  And that’s only a sample of the 36 species of plants Dr. Ben ordered!

With those plants up and growing, our parks can attract more butterflies and native prairie birds like those mentioned above or maybe other special species, such as the  Northern Harrier (Circus cyaneus), or Henslow’s Sparrow.

So that November weekend, Jerry Stewart from Native Connections brought equipment designed for planting native seed. Jerry first carefully calibrated the seed drill for the  seed type, planting rate, and depth.  He then loaded seed in the hoppers and was ready to go. 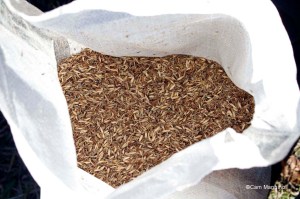 One of the 20-some bags of wild seed purchased with a grant. 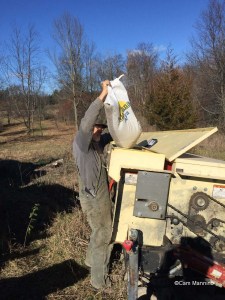 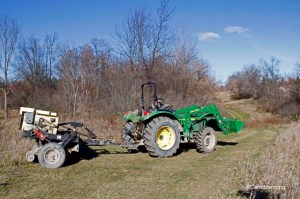 Taking off for the new prairie site at Draper Lake. 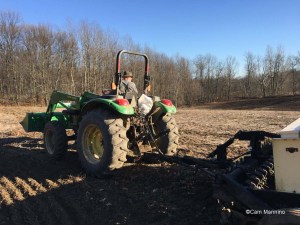 The furrows begin to form as the seed is planted. 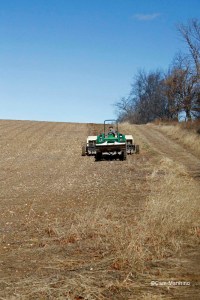 November, 2015: The end of the first turn around the 20 acre prairie site at Draper Twin Lake Park. 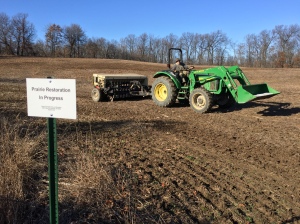 Four of our former OT stewardship technicians, who had worked hard to clear land for this project, joined Dr. Ben and Parks Commissioner Colleen Barkham (not pictured) to see the moment when the seed finally went into the ground. The former technicians are now finishing up school or pursuing careers in various environmental fields. 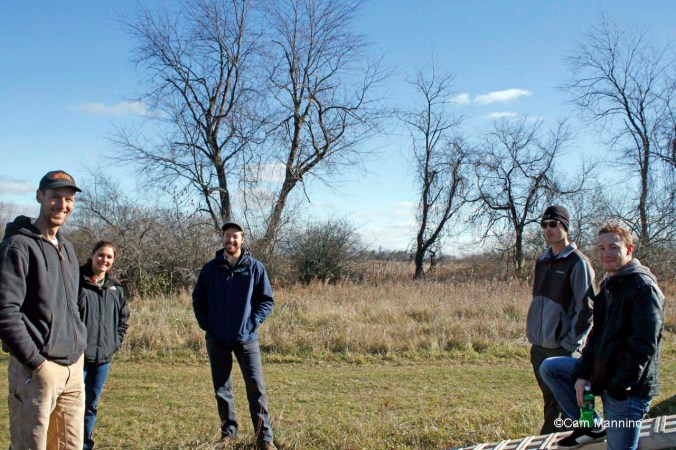 Now the native seed is in and next spring,  sturdy native wildflowers and grasses will begin sinking their roots deep into the soil, a survival strategy that will take them 2 or 3 summers.  And then in year three or four, we will be able to watch prairies in full bloom again in Oakland Township.  As time passes we hope the wildlife return –  butterflies floating above swaying grass and native wildflowers, while the Bobolinks sing and the “Bob-White!” whistle returns to grace the summer months.  Dr. Ben shared some photos taken on the Flint Hills prairie in Kansas (where he completed his doctorate)  in order to help us dream until then. 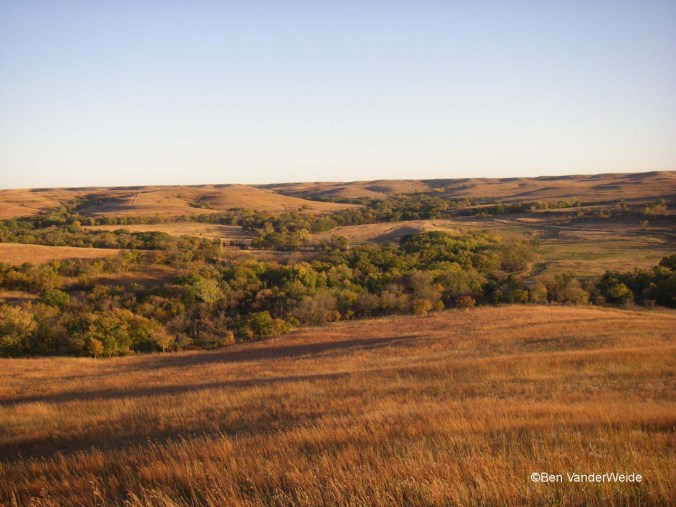 A golden fall prairie in Kansas 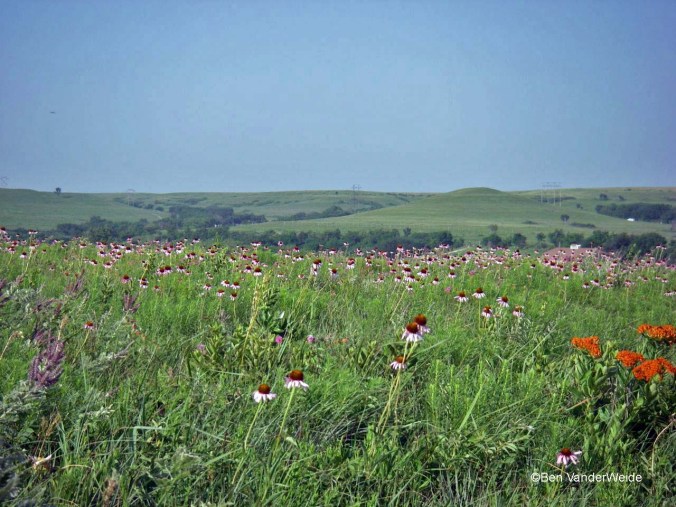 A prairie in Kansas with a huge bloom of Coneflowers the year after a drought! 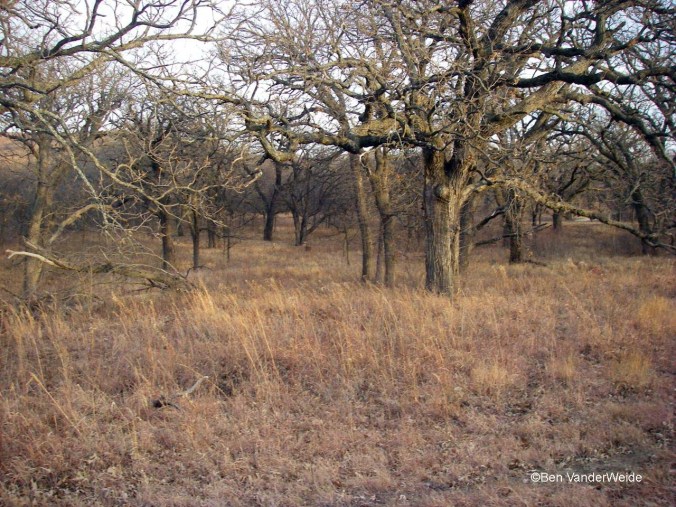 A fall landscape from Kansas shows a “gallery forest” that grows along the streams in Kansas. The widely spaced oaks with prairie vegetation underneath give an image of what “oak savanna” or “oak barrens” might have looked like years ago here in Oakland Township. 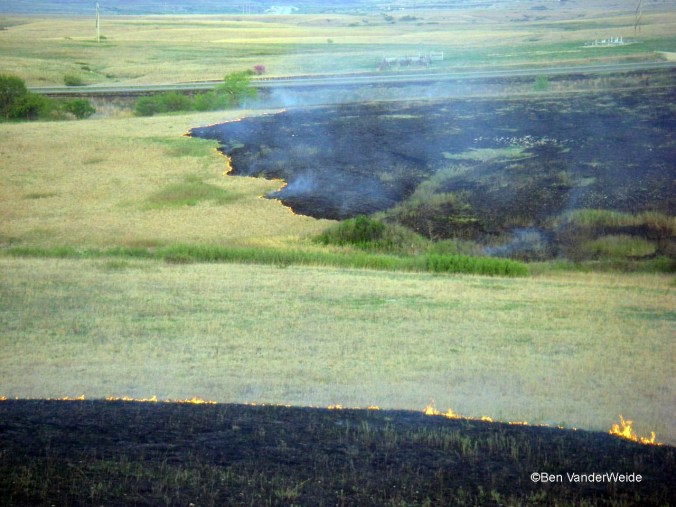