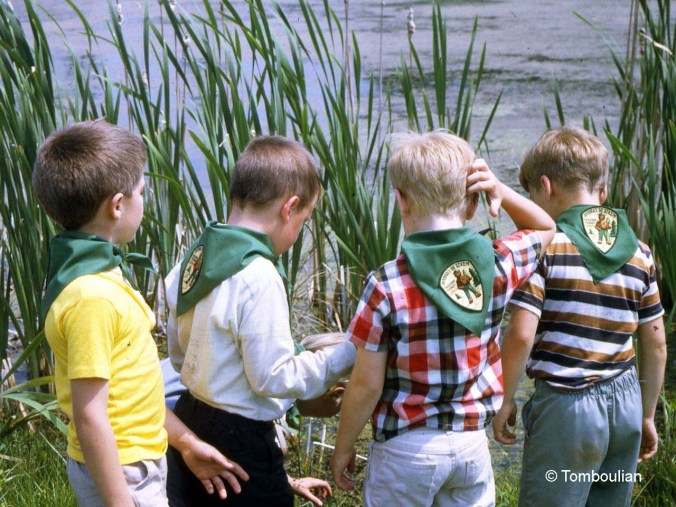 Last week, we explored nature in Bear Creek when it was a working farm 75 years ago. I thought it would be interesting to continue following its history to learn how it became our first publicly protected park. And the source for that information was  the “mover and shaker” who envisioned turning this abandoned farm into  Bear Creek Nature Park and  helped make it a reality – Parks and Recreation Commissioner Alice Tomboulian.

Many thanks to Alice and her husband Paul for sharing their knowledge of Bear Creek 45 years ago – and their photos below that I’m using with their permission! Also thanks to Parks Director Mindy Milos-Dale for great info and photos of the Grand Opening of the new park developments in 2003!

Much had changed since the 1940’s when the Comps family lived on the farm. With no animals grazing, the grass in some Old Fields had grown tall, while rental farmers raised corn in others. The county had widened Snell Road, taking out the old sugar maples that once graced the front of the farmhouse. The county had also straightened Gunn Road, eliminating a steep curve that went around the far north of Bear Creek marsh by building a new straight crossing with a metal culvert. Sometime in the 60’s, the old farmhouse burned, leaving today only a remnant of an outdoor grill built by George Comps’ father  in the 1940’s or 50’s from stones on the property. (Hover over photos for captions. Click on photos to enlarge.) 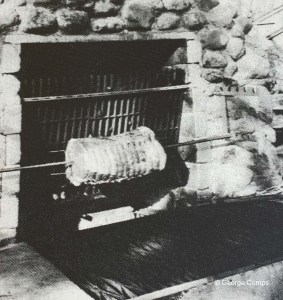 The only remnant of the farmhouse today – the family grill.

When Alice and Paul Tomboulian and their family moved to Oakland Township in 1969, the land that became Bear Creek Nature Park was abandoned farmland still owned as an investment by Mr. Devereaux of the Richard C. Devereaux Foundation in Detroit (now of Bloomfield Hills). The Tomboulians were naturalists and lived across from this lovely piece of land.  Alice was a volunteer at Seven Ponds Nature Center in Dryden and  Paul headed the department of Chemistry and Environmental Health at Oakland University. They recognized the importance of those 107 acres – the marsh, the wetlands, the plants and wildlife – for conservation and preservation. In those days, children and their parents exploring empty land was common and not thought at all to be trespassing. So the Tomboulian family skated on the pond near Gunn Road and explored the woods and fields. 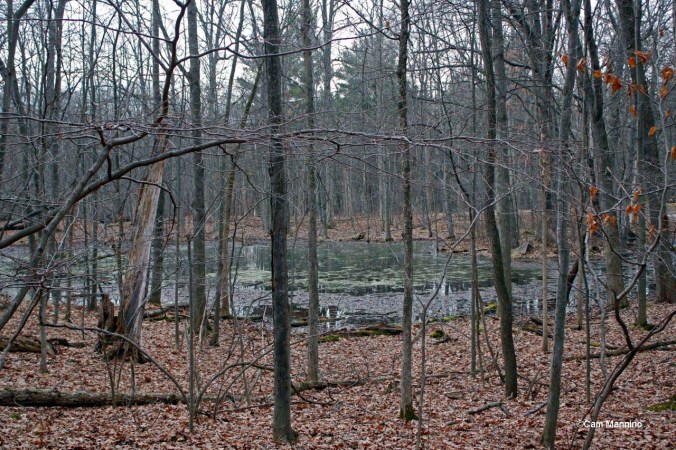 Vernal pool near Gunn full of water in early spring

Alice and Paul Tomboulian and their three children used the land that would become Bear Creek as a perfect spot for nature study. Even Alice’s stepmother joined in! Exploring the marsh, for example,  took some gusto in those days before the docks were available for observation. So Alice and her stepmom waded in, fully dressed in old clothes, to explore the reeds for coot nests and other denizens of the marsh.  Along the way, of course, they also picked up the same kind of trash my husband and I retrieve in the park from time to time to this day!

Alice Tomboulian and her stepmother in the ’70s wading out of the marsh after nature study and a little trash pickup! Early ’70s

One day Alice heard a chain saw roaring across the road and hurried over to see who was cutting down trees. It turned out to be the landowner, Mr. Devereaux. Rather than questioning her interest, Mr. Devereaux was pleased that someone was watching over  and protecting his land and gave his permission to explore and later, granted permission for Baldwin School field trips for nature study. Soon school children, their parents and teachers began arriving through a narrow path from Collins Road, which today is a much wider, developed path from the Township Hall. The children below and in the photo at the top of the blog, some sporting “Ranger Rick” neckerchiefs, would be in their fifties by now.

Baldwin School children coming in from Gunn Road in 1969

On that field trip on a sunny June day in 1969, the children did a bit of exploring around the pond, though of course no viewing from a deck was possible since none existed. Note the difference between 1969 and now. In 1969, the northern side of the Center Pond was edged only with tall grass – most of it non-native grazing grasses and native reeds. Now the north side of the pond is surrounded by  thickets of some native and many non-native invasive shrubs .

The open, grassy north side of the Center Pond in 1969 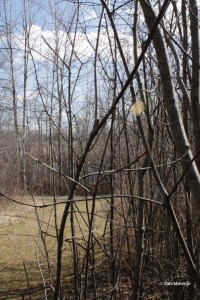 Here’s another group of Baldwin school children coming down the Eastern Path in June of 1969. Then a narrow foot path wound down through the eastern Old Field where the grass planted to feed the cows was starting to grow tall.

School children in 1969 coming down the narrow footpath that now is the Eastern Path.

Now a wider, developed trail follows the same path but over the years, thanks to the stewardship of the  Parks and Recreation Commission, native Canada Goldenrod and other native  wildflowers have made a big comeback.  Black-eyed Susans, Coneflowers, Prairie Dock and Common Milkweed, beloved by Monarch butterflies, live peaceably beside non-native wildflowers like Queen Anne’s Lace and Ox-eye Daisies.

Eastern Path through the meadow in 2015 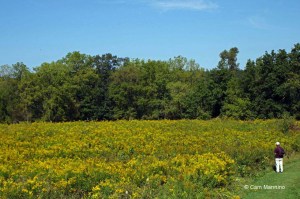 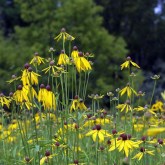 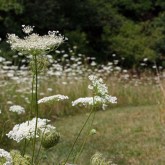 In 1974, an ecological survey of Oakland Township by Paul Thompson of the Cranbrook Institute of Science confirmed the importance of the land that is now Bear Creek. He briefly described the area that is now Bear Creek. as having “an excellent cattail marsh…several dozen muskrat lodges…an oak hickory woodland of moderate sized trees, and a number of small woodland ponds.”

Paul Thompson’s description of the oak-hickory forest and Bear Marsh on the north end of Bear Creek Nature Park, which he labeled as areas W-67 and W-68.

In the early 70’s, Alice and Paul Tomboulian and their children continued their nature study on the land that was to become Bear Creek Nature Park.  Mark, the Tomboulian’s younger son, was a born naturalist. Over the years that he explored Mr. Devereaux’s land,  he kept a list of every plant, animal and bird he saw.  Here Alice and her three children are doing some nature study at Bear Creek marsh in the 1970’s.  (Photo from an article in the Pontiac Press, now the Oakland Press.) 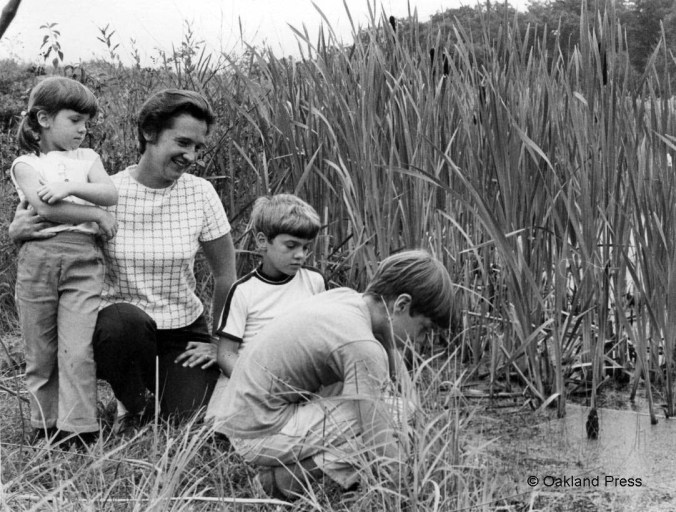 Alice Tomboulian and from right to left, her three children Nancy, Mark and Jeff, exploring nature at Bear Creek Marsh in the 1970’s. Photo from Oakland Press.

In the ’70s,  Alice was serving on the Oakland Township Board of Trustees. Armed with her own nature study and her son Mark’s wonderful list of the wildlife and plant life in the marsh, she proposed to the Parks Commission the creation of the township’s first park by buying Mr. Devereaux’s property.   And in 1977, The Oakland Township Parks Commission purchased the 107 acres of  land which is now Bear Creek Nature Park using $305,000 from the Parks Millage Fund.

At the time, township residents preferred keeping the parks with access only by footpaths. But problems needed to be solved in Bear Creek Marsh.   Over the years, the metal culvert under Gunn road installed in the 1940’s had  rusted and partially collapsed.  The drainage became blocked with runoff and debris from roadwork and development.  Water flooded the marsh, creating unnaturally high water levels,  “sometimes giving the appearance of a 8 acre lake,” as Paul Tomboulian puts it.  The high water was drowning a very special native habitat relied on by native wildlife. (Hover cursor over photo on right for caption.)

Alice, the PRC, and the Township worked with the Oakland County Road Commission for 16 years to correct this problem. According to Paul Tomboulian,  the old culvert eventually “was replaced with a new 78-foot long pipe in 2003, new water levels were set, and erosion control measures near Gunn Road were installed.”  Now,  the water level has returned to more normal levels and bulrushes, cattails and marsh wildlife are returning to Bear Creek Marsh. 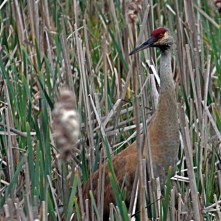 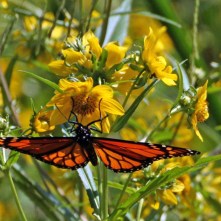 Later, when the Parks Commission became the Parks and  Recreation Commission, the PRC moved to make Bear Creek Nature Park even more accessible to the public.   With the approval of commission members,  Parks Director Mindy Milos-Dale sought out and wrote the Township’s first grant from the Michigan Natural Resources Trust Fund. The grant proposal was accepted and paid for 44% of the cost of facilities improvements at the park.  They included ADA accessible limestone trails, wooden boardwalks, docks and overlooks in wetland areas, a picnic pavilion, a children’s play area, a gravel parking lot and restroom facilities. The remaining cost was matched from Parks Millage Funds.

After all the careful planning and financing was done, Bear Creek Nature Park had its Grand Opening on September 27, 2003.  Visitors, like us today, enjoyed the Old Fields filled with the gorgeous orange and purple of fall’s Canada Goldenrod and New England Aster. They could hear Canada Geese and Sandhill Cranes crying overhead as they headed south. Visitors watched water birds from the observation deck as they do today. Muskrats and snapping turtles swam peacefully in Bear Creek Marsh.

What a journey!  We owe a debt of gratitude to the vision, consistent effort and careful study of the Tomboulians, PRC commissioners over the years, Parks Director Milos-Dale and the support of many park-loving Trustees  whose foresight and careful planning protected the marshes, meadows and woodlands of Bear Creek for all of us who enjoy its very special beauties today.