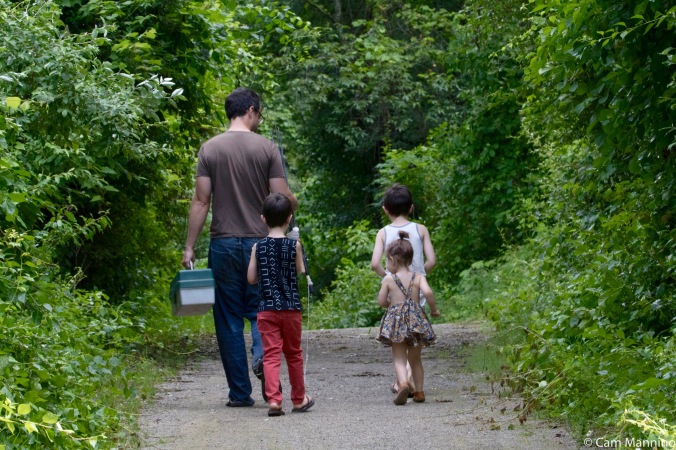 Meeting the lovely family above at Draper Twin Lake Park one morning was a fitting beginning to my walk.  This dad was kept very busy baiting hooks and unhooking Blue Gills for his three young children who were excited to take their catch home and “eat ’em.” Well, the avian parents this week are as busy as that dad. Many fledglings are out of the nest but not quite “ready for prime time.” The youngsters’ flights are still a bit awkward, they haven’t quite grown into their beaks, and they object to being weaned from feedings by mom and dad. They crouch on branches, trying to look helpless by quivering their wings and begging “Feed Me!” with loud, high-pitched and incessant chirping. The conscientious adult birds are busy plucking berries, ferrying caterpillars and crunching seeds to fill young beaks. Meanwhile, more summer butterflies and other insects appear each day as native and non-native flowers line the trails and bloom in the wetlands. Summer, the busy season for nature, is well underway. 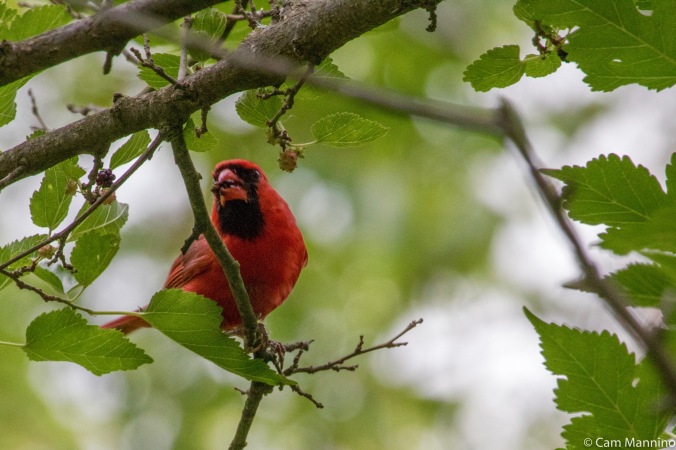 Twice as I entered the western path to the lake, I spotted a male Northern Cardinal (Cardinalis cardinalis) plucking little fruits from a bush and feeding them to his offspring. Juvenile cardinals have coloring similar to the female, except that their beaks are dark brown instead of red-orange like both adults. This hiding youngster couldn’t resist one peak at me over the tops of the greenery. 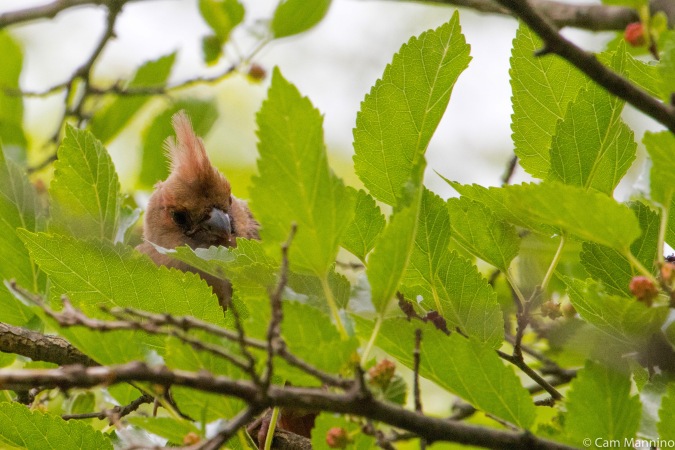 Juvenile cardinals have coloring similar to the female,  except her beak is red-orange and the youngsters’ beaks are black.

Further along the trail, a conscientious mother bird, the female Downy Woodpecker (Picoides pubescens), brought goodies to her youngster that was crouched on a branch in the classic quivering pose of begging fledglings. “Poor me; feed me; I’m starving.” 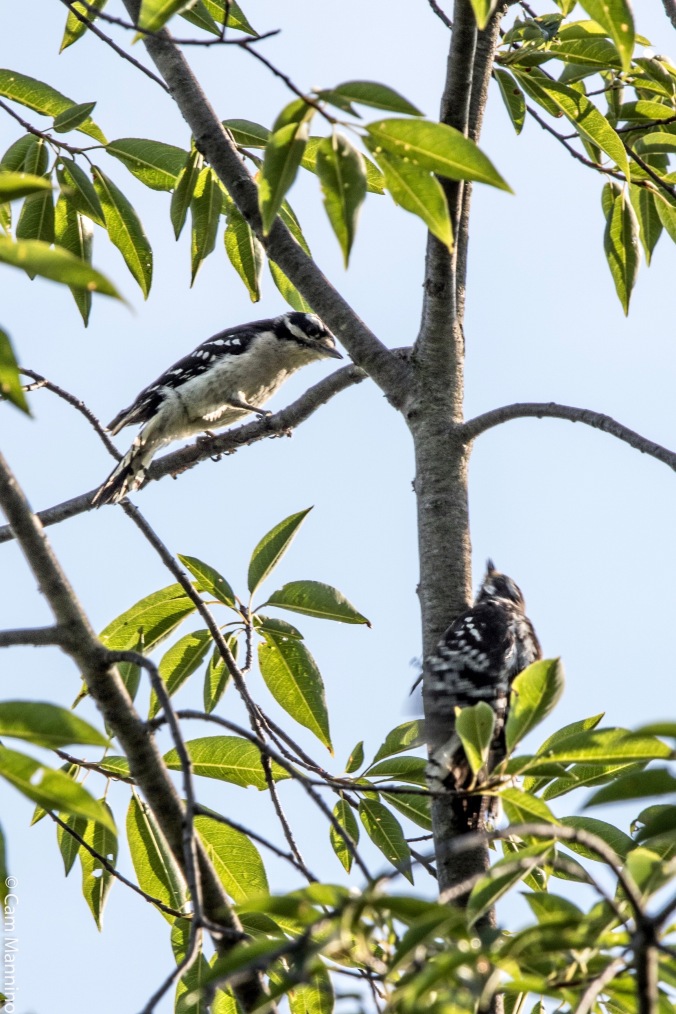 A juvenile Downy Woodpecker crouches and flutters in the classic begging style of baby birds looking to be fed.

Once mom took off, the youngster, its juvenile red cap on display, practiced a bit of upside-down branch hopping. 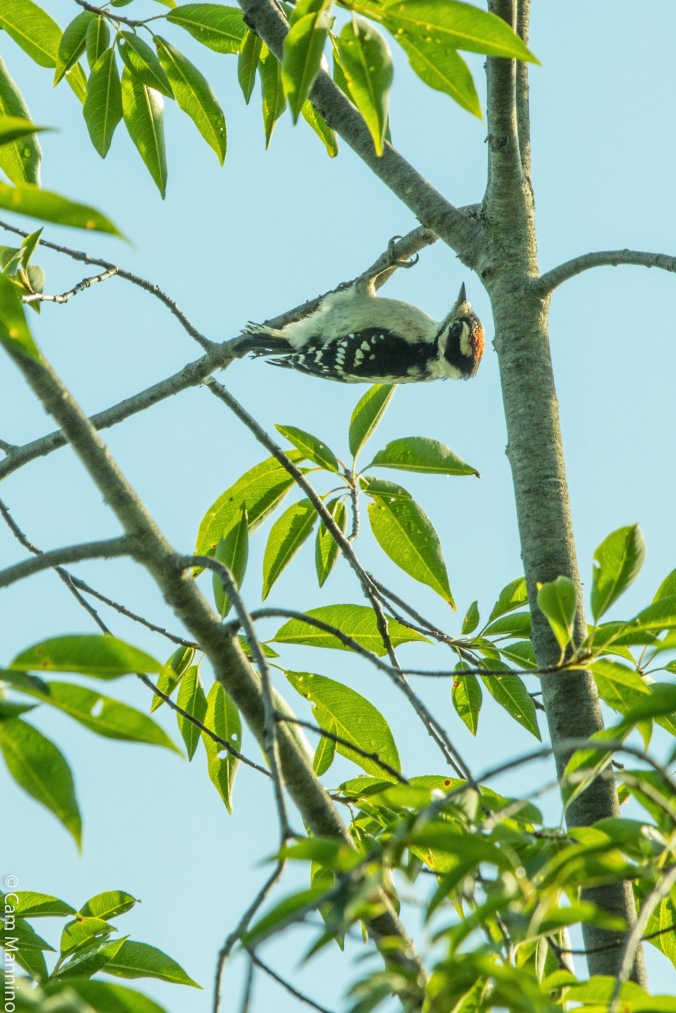 Juvenile Downy Woodpeckers have small red caps. Adult females have no red on the head and males end up with only a red dot at the back of the head.

A male Common Yellowthroat (Geothlypis trichas) sang an abbreviated version of his “Witchedy, witchedy” song repeatedly in a snag over the marsh. Farther up the path, I’d seen a young female hiding in a large bush, but it didn’t stop moving long enough for a good shot, I’m sorry to say. It has the slightly askew, downy look of a young bird. Thanks to Natural Areas Stewardship Manager Ben VanderWeide and expert birder Ruth Glass for identifying this little one for me! And to Bob Bonin for his fine photo of a fully fledged adult female so you can see how the little female will eventually look.

In another snag by the lake, a mother Red-bellied Woodpecker (Melanerpes carolinus) was busy feeding her nestling(s), traveling back and forth and stretching into the hole to feed whoever was inside. Those babies should be very safe in this nice deep hole in their lakeside dead tree!

Over in the eastern part of Draper Park, I was greeted by two fledgling Barn Swallows (Hirundo rustica) sitting on a wire by the parking lot. Adult Barn Swallows sport russet throats and loooong, deeply forked tails. These were obviously fledglings. 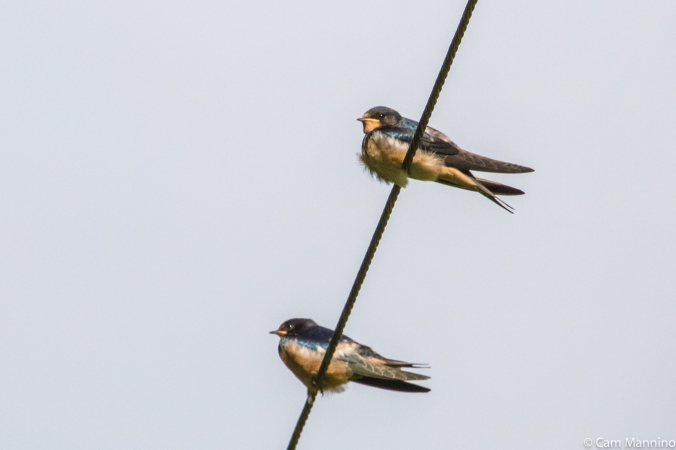 These youngsters were still slightly downy, shorter-tailed than adults, and only partially iridescent blue-black on the back. They sat remarkably still on the wire and periodically tried extending their wings. The fledglings below seemed to tip slightly back and forth as if trying to find its balance with those snazzy new wings. And the light color on the side of its bill is also typical of a juvenile Barn Swallow. 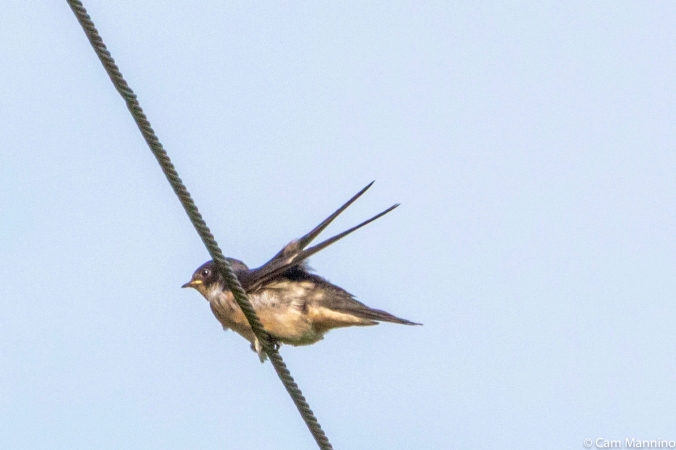 A young Barn Swallow working on its wing technique

What appeared to be a well-behaved, quiet young Eastern Phoebe (Sayornis phoebe) – on the right below – traveled about on the edge of the north prairie as its parent (left) slipped down into the grass periodically to forage like grown-up flycatchers. From a distance in bright morning light, it was hard to see if the presumed youngster (right) had a slightly more yellow lower belly than the adult. The smaller bird looked a bit misproportioned, though, like a lot of fledglings do and also had a more “smudgy” juvenile breast as described by Cornell lab. So my conclusion is I was looking at an adult and its offspring. 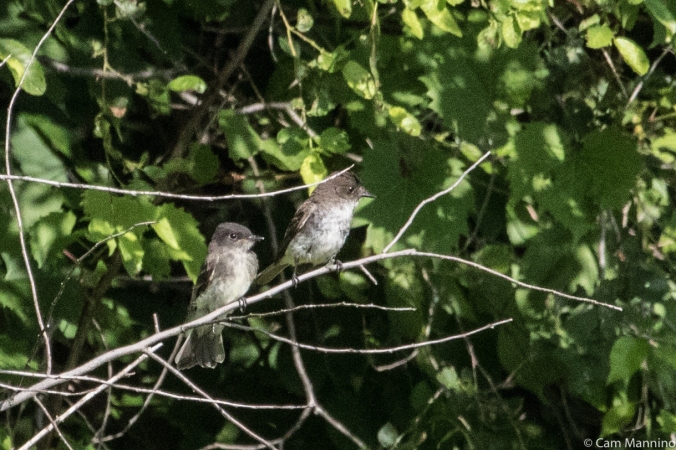 What appeared to be an adult Eastern Phoebe (left) with its more smudgy-breasted youngster on the right.

Ben spotted a bird with a long sweeping tail in a snag near the prairie and quickly identified it. According to Cornell Lab, the Black-billed Cuckoo (Coccyzus erythropthalmus) is “common but secretive” and “heard far more often than seen.” Evidently, it eats lots of spiny caterpillars and has adapted to that spiky diet by shedding its stomach lining periodically to get rid of the spines. Yikes! I caught sight of the cuckoo flying with its very long tail trailing behind, but never got a shot. So here’s a beautiful photo from a gifted photographer, Jerry Oldenettel, on inaturalist.org. 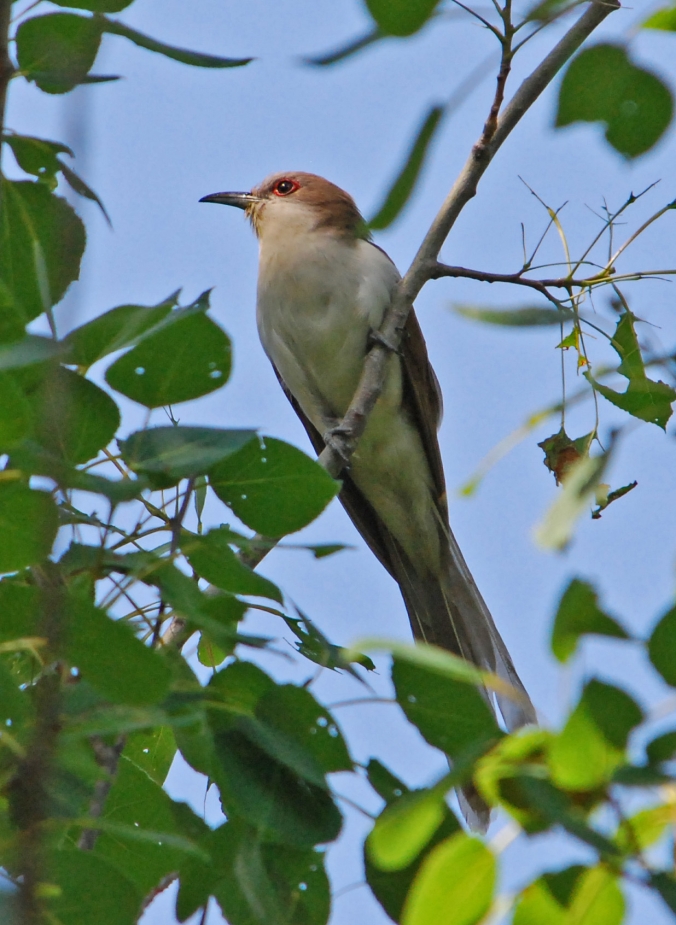 Photo of Black-billed Cuckoo by Jerry Oldenettel (CC BY NC SA) from inaturalist.org

A female Black Swallowtail shows her distinguishing big band of blue spots as she sips from Hairy Vetch, a non-native vine.

A female Black Swallowtail butterfly (Papilio polyxenes) probed the funnel-shaped blossoms of Hairy Vetch (Vicia villosa), a non-native vining plant. The large blue spots at the bottom of the butterfly’s wing tell us she is a female and the two rows of  yellow spots indicate that she’s not the black morph of the Eastern Tiger Swallowtail (Papilio glaucus), which is very similar. According to Wikipedia, the orange spots on the underside of her wings protect her while she’s laying eggs, because they mimic the Pipevine/Blue Swallowtail (Battus philenor) which is toxic to birds. The Black Swallowtail is not, but birds will be wary. 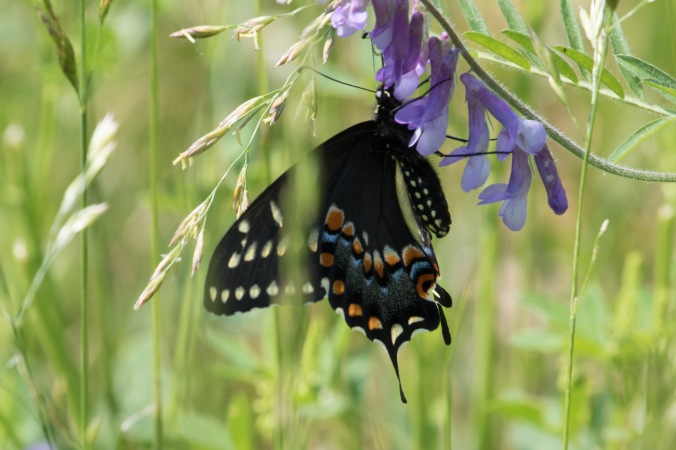 The female Black Swallowtail’s orange spots on her hindwings mimic the Blue Swallowtail, which is toxic to many birds. Mimicry can provide protection.

Red Admirals (Vanessa atalanta) showed up on both sides of the park one morning. This butterfly migrates from the south rather than overwintering here. Look at those cool striped antennae with yellowish-white tips! 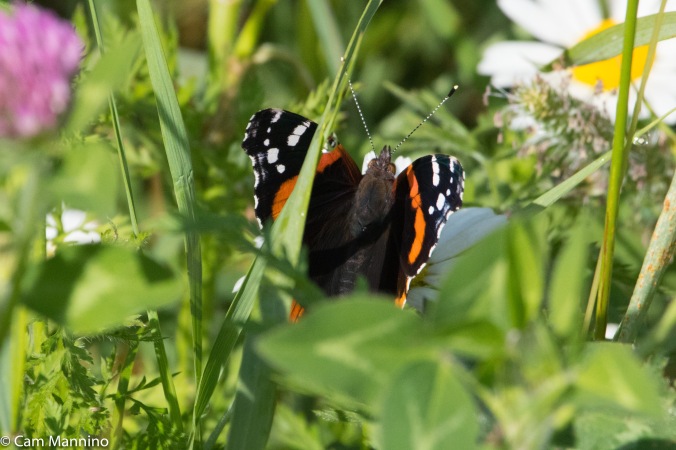 The Red Admiral butterfly migrates from the south each spring.

According to butterfliesandmoths.org, the Silver-spotted Skipper (Epargyreus clarus) rarely frequents white flowers and almost never yellow ones.  But the males do sit on tall flowers or grasses to attract females, so perhaps this handsome skipper was trying to snag a mate! 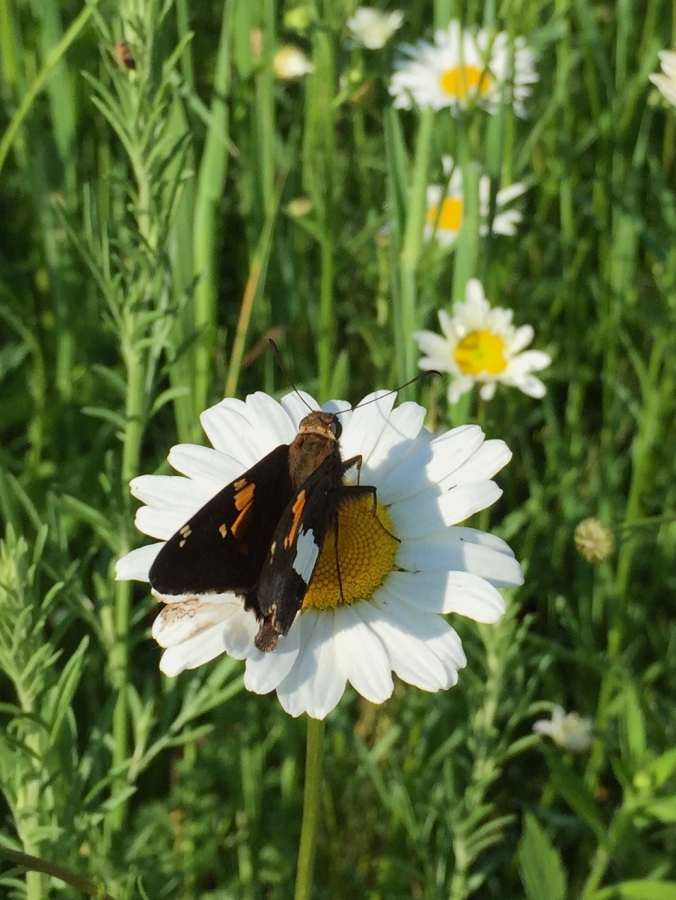 The Silver-spotted Skipper prefers more colorful flowers but may have been posing on this Daisy to attract a female.

A Northern Pearly-Eye Butterfly that rested on the path one morning overwintered as a caterpillar. Like the early season butterflies (e.g. the Mourning Cloak), it feeds on sap from willows, poplars and birches or sometimes the fluids found in carrion or dung. Nature makes use of everything, doesn’t it? 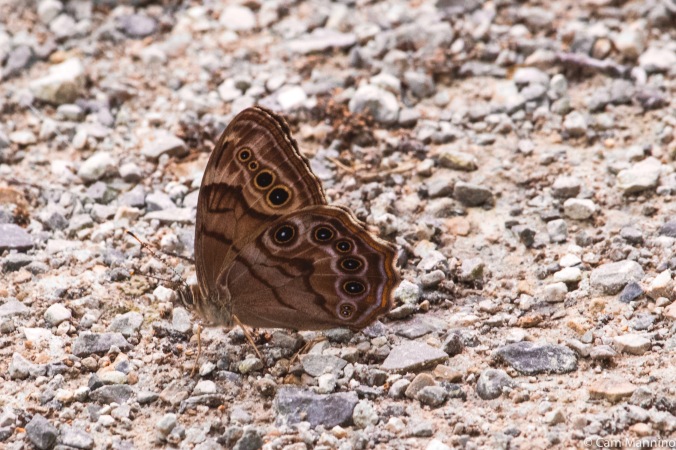 The Northern Pearly-eye butterfly feeds on sap and other fluids, but not on flower nectar.

A pair of mating Little Wood Satyr (Megisto cymela) butterflies flew from the path to a nearby leaf still attached to one another as I approached. 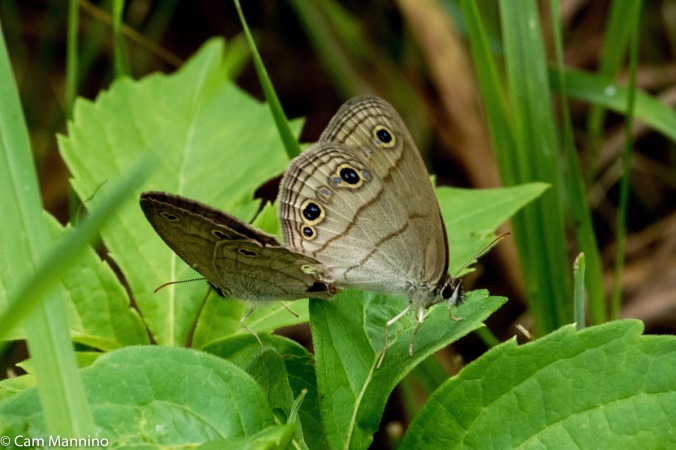 Flowers Blooming at Draper Now that are New to Me

This month at Draper, Ben identified for me two beautiful native flowers I’d never seen before. Near the lake, we spotted the fuzzy blooms of another “Beard-tongued” plant, in the same genus as the Hairy Beard-tongue (Penstemon hirsutus) featured in our Photo of the Week two weeks ago. This one is called Foxglove Beard-tongue (Penstemon digitalis). Some blossoms have little lavender stripes inside to lead insects to the nectar, helping to spread their pollen. 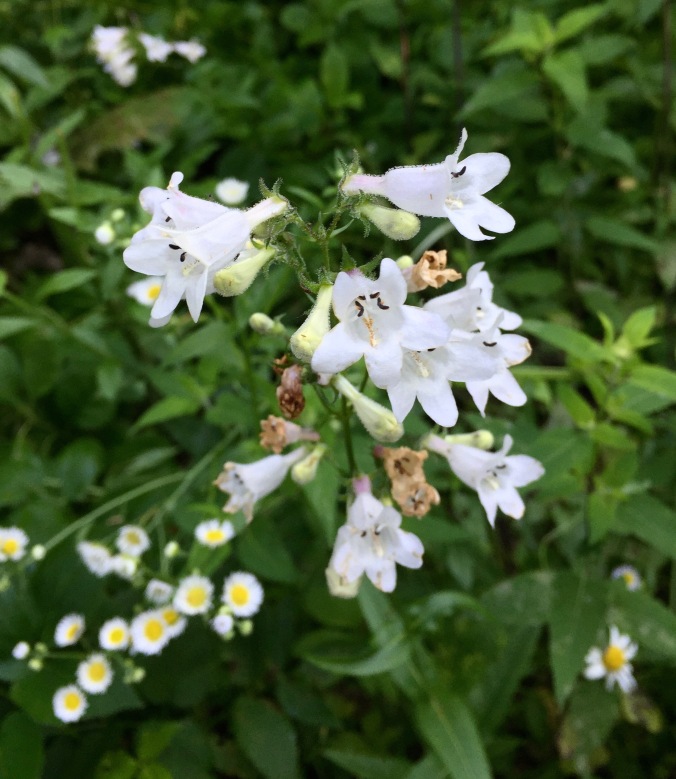 The other native plant was a rose growing right next to the floating dock called the Swamp Rose (Rosa palustris). On one of the blooms, I spotted a tiny Katydid (family Tettigoniidae). Check out those long antennae! 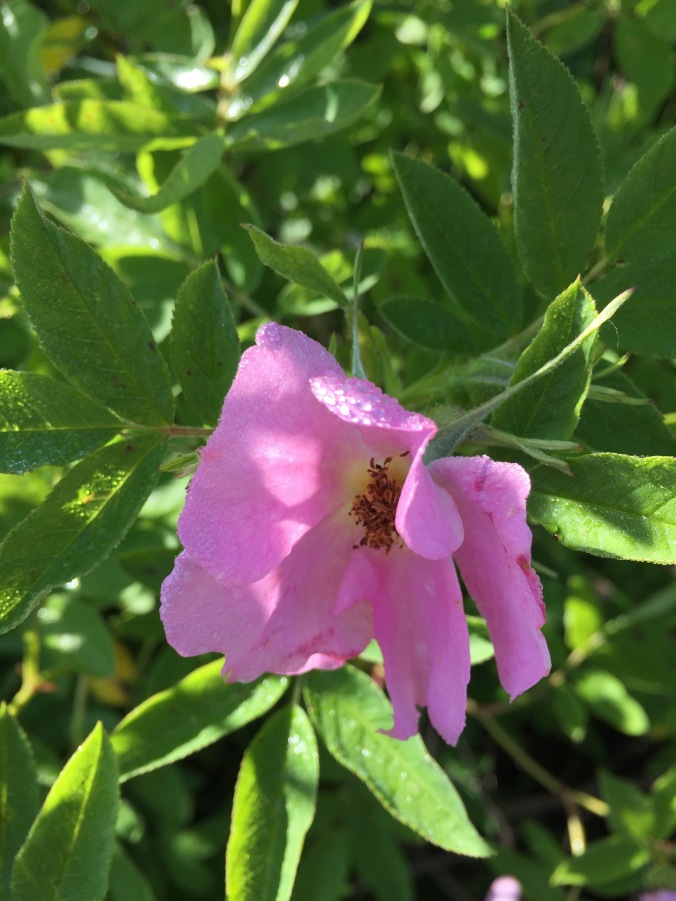 A Swamp Rose blooming at the edge of the floating dock. 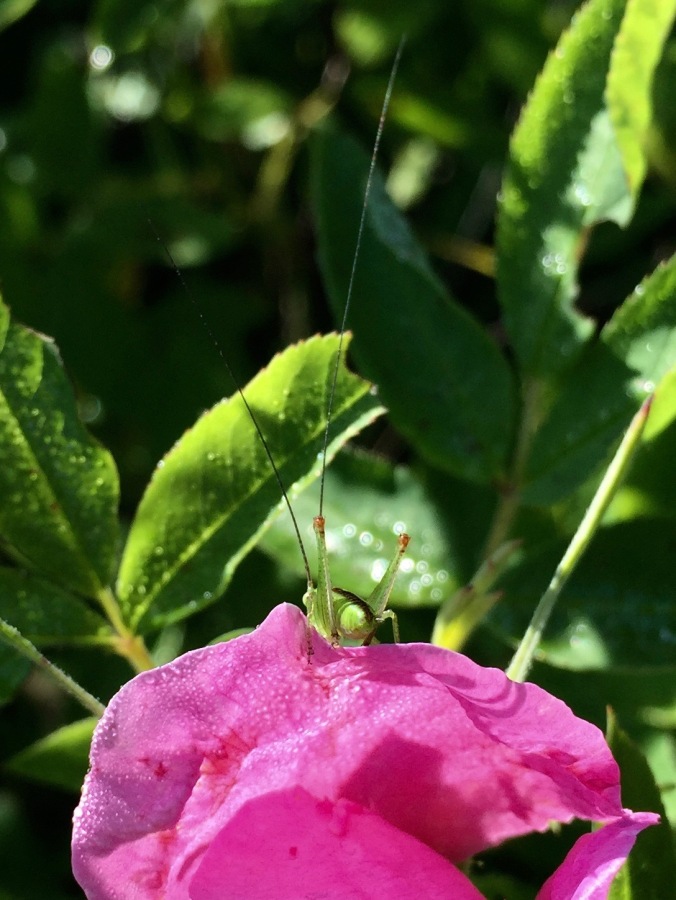 I always like to know the names of flowers whether native or not. It keeps me more aware of the detail in the landscape. So here are three kinds – native wildflowers, non-natives that are not always invasive, and an invasive plant that does harm to other plants by shading or crowding them out and multiplying aggressively.

Turtles vs. Creatures That Love Their Eggs

Often in early summer, I see Painted Turtles (Chrysemys picta) walking along the same trails I’m taking. They’re looking for soft, sandy soil where they can bury their eggs. Some places are definitely more hospitable for this purpose than others. This Painted Turtle came trundling along a path near Draper Lake, perhaps returning from an attempt to safely bury her eggs. 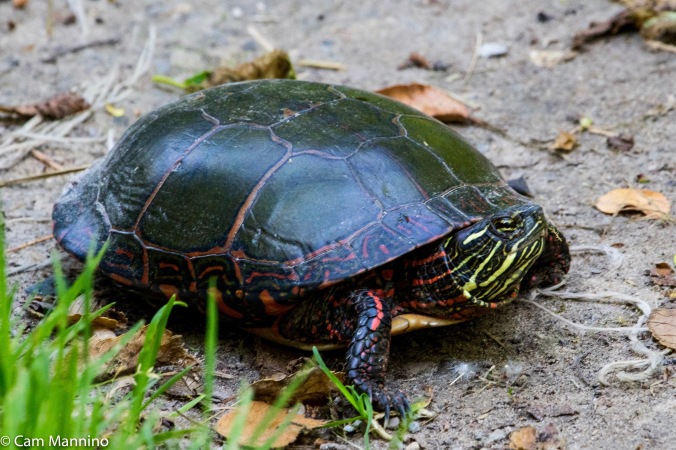 A Painted Turtle perhaps returning from a soft spot in the soil where she buried her eggs.

But out on the prairie on the eastern side of the park, evidence abounds that lots of animals love to find and eat turtle eggs. On one outing with the birding group, we spotted several turtle nest dug up with the leathery white egg shells laying outside. 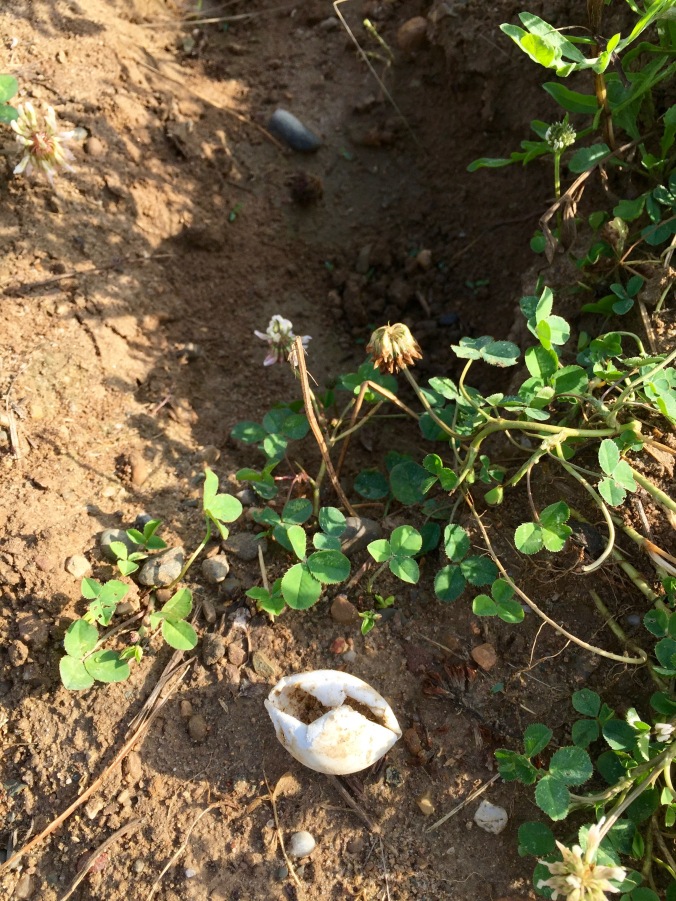 Some animal has dug up a turtle nest and eaten the eggs leaving the rubbery shell.

Among the creatures that enjoy turtle eggs are raccoons, foxes, coyotes, skunks, and birds like herons, gulls and crows. As an (chicken) egg eater myself, I can’t complain. Luckily, Painted Turtles are our most abundant turtle species, so I assume nature is just taking its course as usual. 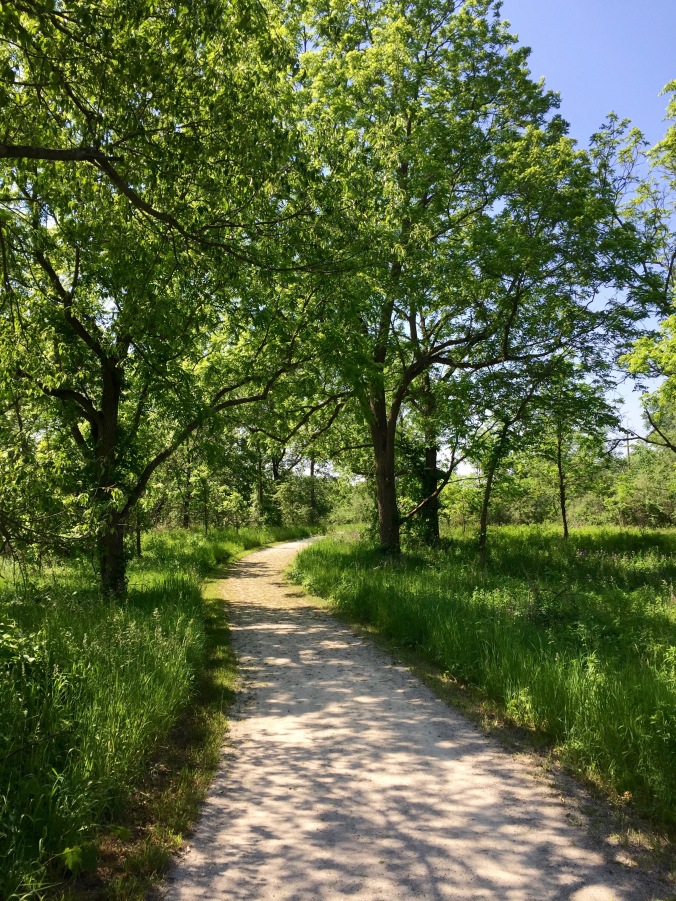 Dappled light on a trail on the western side of Draper Twin Lake Park.

It’s always iffy to anthropomorphize and assume that the behavior of other animals is similar to our own. We can’t, of course, know for sure what motivates a particular animal’s behavior. After all, we don’t understand our own motivations sometimes! But science is increasingly exploring the social and emotional lives of all sorts of creatures and discovering that many teach and learn in much the same way we humans do. And of course, animals have knowledge, skills, and memory that is superior to our own – for example chickadees remembering thousands of places they have stashed seeds or nuts. So when young fledglings beg to be fed or practice short flights in much the same way that little children pester us for food or learn to walk, it’s probably normal to feel an intuitive understanding of what might be going on. If we smile in recognition of our kinship with all creatures, maybe that will help us be more careful stewards of the natural world in which we’re embedded. And that has to be a good thing, right?