The solstice has passed; the days and nights get equal time. But when I’m shivering, my fingers and ears go numb in a stiff  wind, I struggle to hold on to the idea that we’re heading into spring. Until, that is, I head into the parks.

In mid-March,  water birds began splashing down in Cranberry Lake, finding any narrow stretch of open water within the ice sheet. They floated and fed – until one glorious morning, the whole lake turned liquid and bright blue! Migrating flocks honked, chattered and wheeled overhead. Some stopped to rest and feed before heading further north; others explored nesting sites. Our year ’round residents tuned up their spring songs. Territories must be established! Potential mates must be impressed! Best of all, the tiny frogs thawed after their frozen winter state – and now they are  singing! Can genuine spring, with its fulsome birdsong and burgeoning buds be far behind? I think not!

Water Birds Arrive Early, Despite the Ice – and the Muskrats Emerge, too!

It always impresses me that some of the first migrators to arrive in early spring are the water birds! They float, seemingly content, in the icy cracks that form as the sun begins to work on the frozen lake surface. Their cold water strategies involve body fat, oiled feathers, down insulation, and a circulation system which allows cool blood coming up from their feet to pass close to  warm blood traveling down, warming it as it returns to the heart. Below a group of Common Mergansers – black-headed males and brown-headed females –  glided along a thin channel of water on the far side of Cranberry Lake’s iced-over surface. 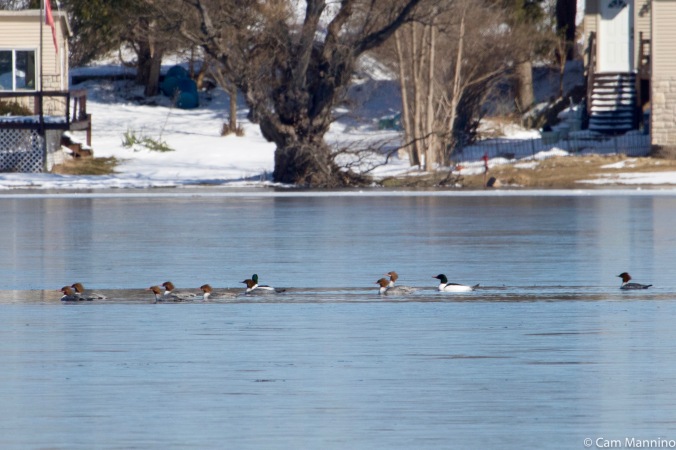 Off in the distance, the Wednesday birders spotted the hunched silhouette of a Muskrat (Ondatra zibethicus) perched on the edge of the ice as a goose floated nearby. It slipped in and out of the water, hungry no doubt for food but also for a meager scrap of sunlight after living under the ice all winter!

Two sunny but cold days later, the ice had disappeared and the lake was bright blue and busy with migrating ducks and geese. Two Bufflehead (Bucephala albeola) and a group of Ring-necked Ducks (Aythya collaris) – black-and-white males and brown females –   dove and surfaced as they foraged near a Canada Goose (Branta canadensis). 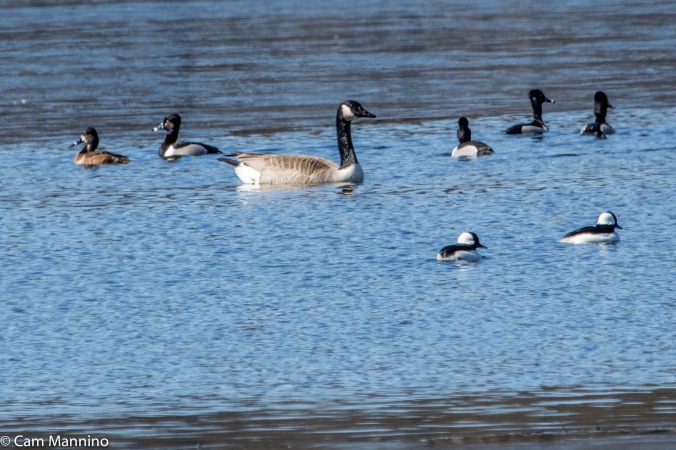 A group of Ring-necked Ducks and two Bufflehead dove and rose next to a Canada Goose as they rested and foraged in the lake.

I got a bit closer to a Bufflehead by checking from the opposite side of the lake. This lone male rocked along on the surface, bobbing under to feed every few minutes. Cornell Lab of Ornithology says Bufflehead accomplish this dive  by compressing their feathers to drive out the air and then pitching forward. A few seconds later, they pop to the surface like a cork and float on.

The Bufflehead dives underwater by pitching forward with its feathers compressed to squeeze out the air, making it less buoyant and able to submerge.

And that same cold morning, what I think was a large muskrat came steaming across the pond toward the eastern side. At the time, I thought this bustling swimmer was a Beaver (Castor canadensis), since there is a large beaver lodge on the western side of the lake. But I’m just not sure of that, so I’m sticking with it being a large muskrat. In the water, its tail looked wide enough to be a beaver, but as it approached the shore, it just didn’t seem to be big enough to be a beaver, unless it was a yearling. And beavers tend to swim with only their heads out of the water. In any case, nice to see this furry fellow plying the pond in the sunshine. What do you think? Big muskrat or young beaver?

The width of this swimmer’s tail made me think this was a beaver, but I think now it was a large muskrat. 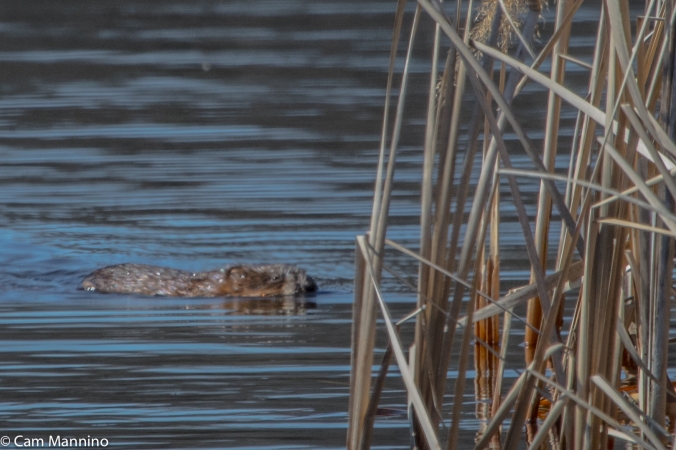 From this nearing shore photo, it appears I’ve seen a large muskrat, rather than a small beaver.

Hearing the ancient bugle of the Sandhill Crane (Antigone canadensis), I quickly looked up to see two in the distance, flying into the far end of the lake.  Aren’t we lucky that they breed in our wetlands?

A pair of Sandhill Cranes fly in to check out the edge of Cranberry Lake as a possible breeding ground.

Spring Songs Signal the Beginning of the Mating Season

As I approached the park one icy afternoon, bright spring music reached my ear – Western Chorus Frogs. These tiny frogs (Pseudacris triseriata – about 1.5 inches long!) are daytime relatives of the nocturnal Spring Peepers (Pseudacris crucifer). They spent the winter frozen solid, no heartbeat, no brain activity, but protected by an anti-freeze of sorts that keeps their tissues from breaking down. Pretty amazing! They thaw out and start singing as the days lengthen. The first afternoon I scanned a wetland trying to see these tiny creatures that seemed to be singing right at my feet, but I could not spot one! So on a second try a few days later, I found a log to sit on near the wetland in the trees just east of the parking lot. After about 20 minutes with my binoculars, I finally spotted two (of the hundreds that were probably there!), the sacks beneath their chins bulging, as they tried to impress a female with their piercing calls. Have a look and a listen! 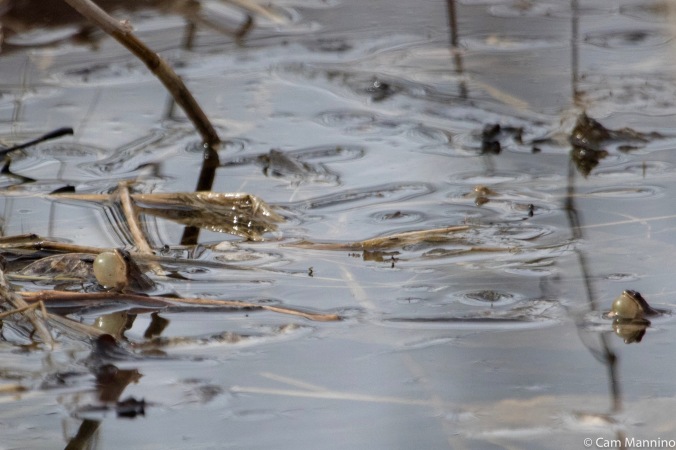 Two tiny Chorus Frogs with bulging necks sing to attract a mate in the shallow water of a wetland.

A male Northern Cardinal (Cardinalis cardinalis) sang from the tree tops in the eastern meadow, turning every few minutes to send his territory call in a new direction. He’s a bit faint on the recording below, so you might need to turn your volume up! I got a bit closer to another male in a bush near the parking lot later on. He was doing “call and response” with another cardinal hidden in the trees nearby.

A male cardinal turns periodically to send his call in all directions.

A male cardinal sang near the parking lot. Another answered from the woods nearby.

And of course, the American Robins (Turdus migratorius) that went south to Ohio and Kentucky returned as well, joining the hardy ones that spent the winter here.

One of many Robins that have returned from Ohio and Kentucky to breed here in the summer.

His spring call is also a bit soft.  And he makes a longish pause before his second “tit whoo” call.

Woodpeckers, of course, use drumming to establish territories, rather than singing.  Both male and female Downy Woodpeckers (Picoides pubescens) attract mates and protect territories with drumming. You can hear their typical drum roll in this Cornell Lab recording which was put to use by the little female Downy below.

I get a huge kick out of hearing flocks of American Goldfinches (Spinus tristis) chirp in the shrubs and small trees. To my ear, they are the only bird that actually says “tweet, tweet, tweet!”  Have a listen at this link and see if you agree! The males are currently molting into their bright yellow summer outfits. 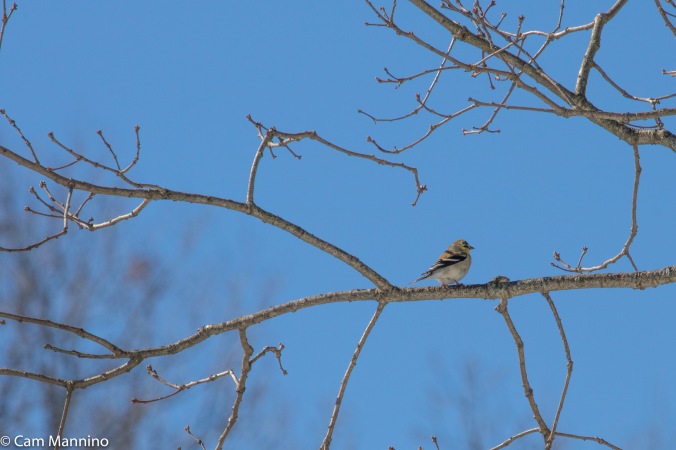 On a bird walk one Wednesday, we heard the far distant, insistent drumming of a Pileated Woodpecker (Dryocopus pileatus). Mark, one of the great spotters in the bird group, finally located it with binoculars on a very distant tree, and suddenly its mate (we assumed) dove across the trail far ahead of us before slipping up and away between the trees. No chance for a photo.  But here’s an incredible closeup by talented photographer Monica Krancevic at iNaturalist.org.

The First Blooms and Some Sturdy Ferns Wait Patiently

The lovely red blossoms of the Silver Maple (Acer saccharinum) brighten gray days in early spring. They emerge on bare branches before the leaves and are pollinated by the wind before butterflies or other insects emerge and start to pollinate. Those big clusters of scarlet florets are a great food source for hungry squirrels in the spring, when food is scarce, since nuts and seeds are either already eaten or beginning to crack open and sprout.  Last week, I found these male (staminate) clusters fallen from the treetops onto the exposed roots of a large silver maple. I love how the red at the edge of the root echoes the red of the flowers.

The scarlet blossoms of a silver maple are echoed in the root of the tree itself.

Take a closer look at this cluster of florets, some still closed, others waving stamens that have already shed their pollen to wind.  Once pollinated, the female florets will produce winged fruits, called samaras. 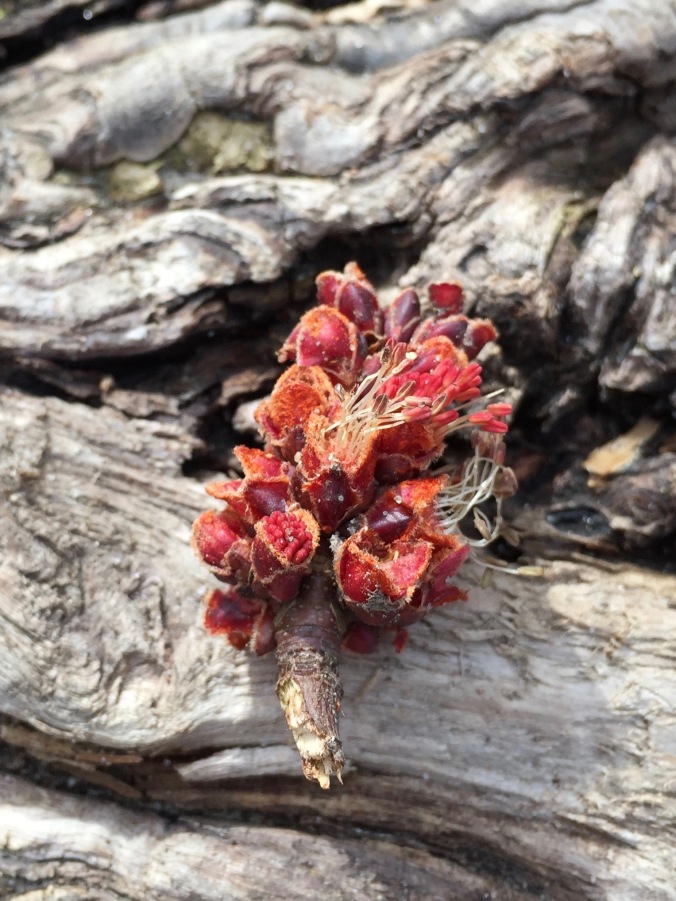 A closeup of a cluster of male florets, some closed, some with their stamens already emptied of pollen.

Nearby on the trail to the lake, some sturdy ferns survived the winter with fertile fronds intact.  The brown beads below are the sporangia on the fertile fronds of the Sensitive Fern (Onoclea sensibilis) that carry the spores for this year’s crop of new plants. On the right, are the vegetative fronds that provide sugars through photosynthesis in the summer months. 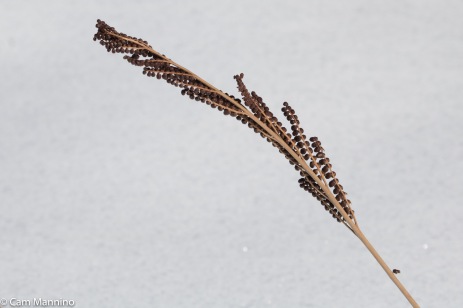 The fertile frond of Sensitive Fern waits for warm weather to release its spores.

Sensitive Fern vegetative fronds in summer do the work of photosynthesis.

And the feathery ones below left are the fertile fronds of Ostrich Fern (Matteuccia struthiopteris) whose spores will be released and carried by the wind in the spring. Their vegetative fronds on the right stood tall and bright green, taking advantage of the moist soil and spotty sunshine in the forest. 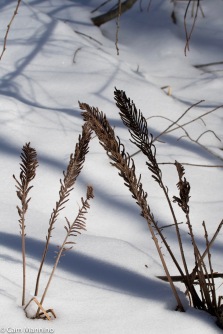 The fertile fronds of Ostrich Fern wait for spring to release their spores. 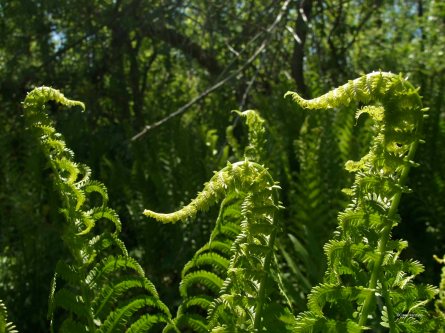 Fronds of Ostrich Fern glowing in the sunlight

Spring Just Peeks Out…Here and There

Behind a scrim of small trees on the way to the lake, I spotted these two Canada Geese floating serenely in a secluded wetland, away from the noisy flocks gathering on the lake. They reminded me that, at this time of year, spring has to be sought out. It appears and disappears. One day the lake is iced over, a few days later it’s rippling and blue and then the snow falls again. On some days, spring isn’t easily seen – just a few red blossom clusters floating in a vernal pool  or scattered on the lifeless grass. Sometimes spring can only be heard and not seen. Frogs as tiny as your thumb sing unseen one day and the next, perch on a bit of floating grass, their throats bulging with amorous sound. Flocks twitter or honk high in a cold blue sky or male birds rehearse the first tentative versions of their mating songs. Woodpeckers tap out a seductive rhythm on the bark of trees. 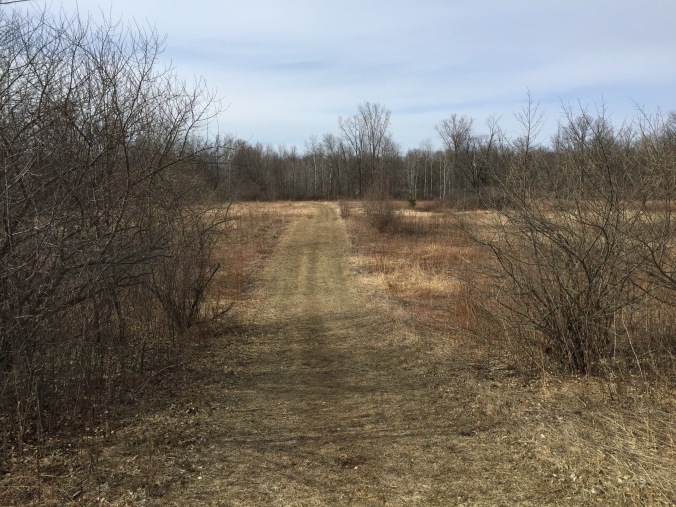 The Eastern Meadow at Cranberry Lake doesn’t look very spring-like yet – but the clues are there.

Early spring isn’t flamboyant and colorful, like it will be in a few weeks. It’s hesitant, waiting to be found and enjoyed if we can only slow down enough. If we watch, we’ll see it peeking through the alternating rain or snowfall, cracking and opening in thawing ponds or hear it whistling, chirping, trilling from inside the brush or high in the treetops. So I hope you have time to delight in these  subtle hints of early spring as they unfold. It won’t be long now…

2 thoughts on “Cranberry Lake Park: Have Hope! Sure but Subtle Signs of Spring!”