An unidentified feather found in an earlier autumn. Anyone have a guess as to which bird? Perhaps a Downy Woodpecker? Mourning Dove? Flicker?  I’m stumped.

Maybe you’ve noticed individual feathers showing up in a nearby pond or on your lawn. Or you’ve noticed that birds and birdsong both seem a bit scarce right now. Or the birds you do see look just a bit scruffy. Well, don’t worry too much. It’s likely that nothing’s gone wrong for your avian neighbors. It’s just that lots of birds molt in late summer.

Text and photos
by Cam Mannino

That slightly disheveled bird you saw is probably an adult replacing frayed and worn feathers before the rigors of winter or before its fall migration. Once breeding is over, and while there’s still plenty of food to nourish them, birds systematically shed some of their feathers, replacing them before shedding others. Feathers account for 4-12% of body weight so it takes a lot of food energy to replace them! The foraging male Eastern Towhee (Pipilo erythrophthalmus) below with its feathers a bit askew is probably close to completing his molt. He will need to build up his reserves before beginning his journey to southern Ohio or points farther south. 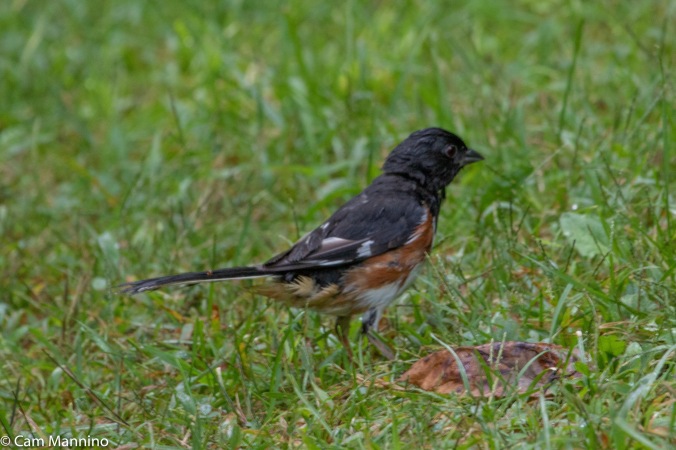 A male Eastern Towhee almost finished with his fall molt and his foraging to restore his energy reserves.

So how does molting work? It turns out that feathers are made of keratin like our hair or fingernails, so feathers can’t repair themselves. The rigors of the breeding season can take quite a toll on feathers. Think of it  – all that to-ing and fro-ing from the nest or tree cavity, the scrabbling that occurs around an adult bird’s head as the young compete to be fed, plunging into the grass to snatch bugs, and riding down stalks to gather seeds on a windy day.  The feathers of an adult bird take quite a beating!  (Click on photos to enlarge; hover cursor for captions.) 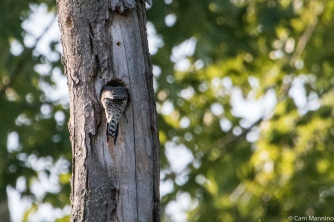 A Red-bellied Woodpecker (Melanerpes carolinus) reaches far into her nest to feed her young.

When I saw this male Indigo Bunting (Passerina cyanea) a week or so ago, I wondered if he was just beginning his complete molt into the dappled blue and brown plumage that he wears during the winter.

A male Indigo Bunting looking more than a bit disheveled may be heading into his complete fall molt into brown plumage dappled in blue.

The molting process begins with the bird shedding a few feathers. In their place,  “pin feathers” emerge quickly. These pin feathers are supplied with blood for growth and look like the rigid shaft of adult feathers. As they lengthen, the blood stays in the lower ends and the tips slowly encase the feathers in a waxy coating. So when you see birds preening during a molt, they are very likely pulling off that coating, allowing the adult feathers to unfurl.

The Great Egret (Ardea alba) below seems to have shed a few feathers, since some were stuck to the branches behind it and some lay below on the trunk of the snag. Perhaps it’s unfurling new feathers, or it could just be going after some persistent feather mites.

A Great Egret preening. Is it molting or just getting rid of some feather mites? I’m not sure.

I’ve read that pin feathers are more sensitive than adult feathers. I wonder if that’s why we often see birds preening so vigorously before migration. Maybe preening feels something like scratching your head when it itches!  According to Cornell’s comprehensive “Birds of North America” subscription website, Egrets molt “some to most” of their body feathers when they’re in “northern non-breeding grounds.” Since egrets nest in only a few areas in Michigan, most of Michigan is a non-breeding area suitable for molting. Maybe that’s why this Egret was preening almost continually, including stretching up its leg to scratch its cheek! 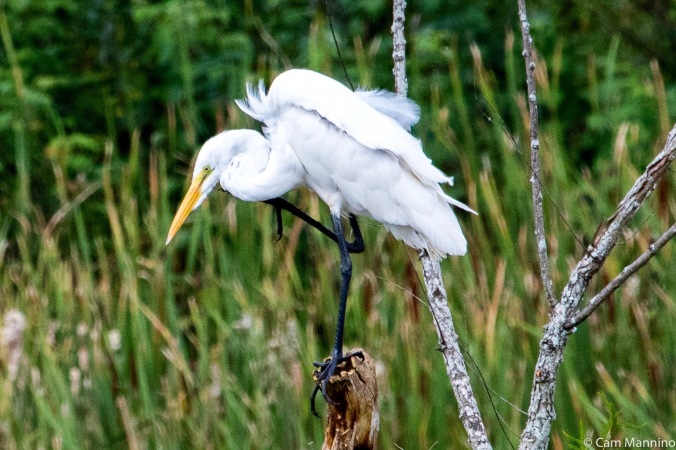 A Great Egret who could be scratching at an itchy pin feather.

Molting happens on different schedules for different bird species. Some have one molt per year, some molt into breeding colors in the spring and molt again in the fall, and some do partial molts,  head and back feathers first and tail and wing feathers later. With experience the age and sex of many birds can be identified using their plumage.

In early summer after breeding, Wood Ducks (Aix sponsa) have an extra molt, a partial one. The males molt into “eclipse plumage, ” a drab plumage that makes the males look more like the brown females, though males still retain the red eye, red upper beak and double white stripe which females don’t have. Evidently male ducks do this to get the protection of being much less conspicuous during summer months. Here’s a photo of a male Wood Duck in eclipse plumage by iNaturalist photographer Heather  Pickard.

Like many ducks, Wood Ducks choose mates in the fall, overwinter with them and then mate in the spring. Of course the males want to look their most dazzling before courting! So they change into their breeding colors from mid-summer to early autumn, instead of in the spring like many birds. It’s a complete molt, meaning every feather is replaced, which renders them flightless for about three weeks. The female’s appearance stays the same with her new feathers. But the male recreates his elegant breeding plumage, including the iridescent green crest sloping down the back of his neck. Below are two males in a wetland near Lost Lake Nature Park two weeks ago who look like they’re about halfway between eclipse plumage and their glamorous breeding colors. 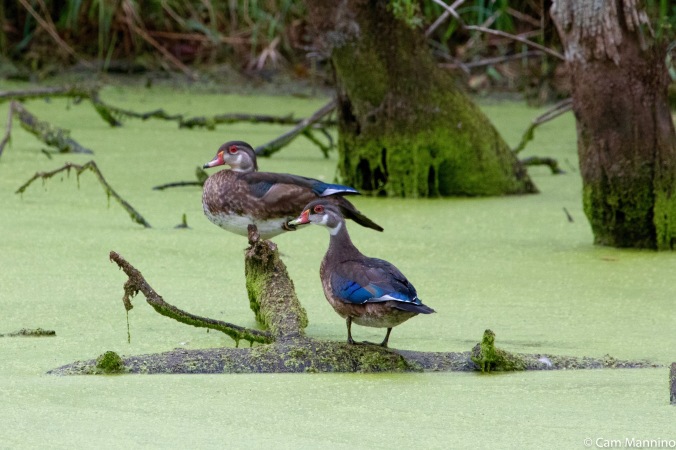 Birds don’t fight change. They simply do what’s required as the light informs them that the days are getting shorter. They molt. So when I go look for my jacket or warmer socks on a cool autumn day, I’m just part of the same process, I guess. And since my adjustment seems much less arduous than that of our feathered friends, I’ll try not to grouse about it!