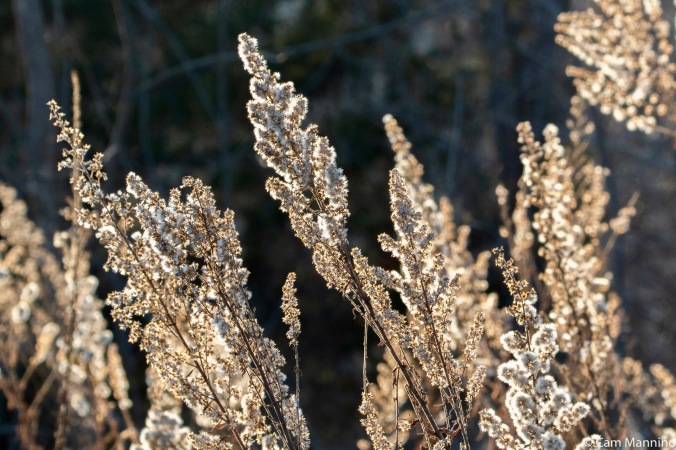 On a frigid late afternoon a week or so ago at Draper Twin Lake Park, I came upon a large stand of Showy Goldenrod (Solidago speciosa) glowing in the sunlight. It turned out that I was not the only one enjoying that warm patch of sunlight backlighting plumes of goldenrod. That sunny curve in the trail was alive with winter birds!

Tree Sparrows (Spizelloides arborea) twittered cheerfully back and forth in the grass below the plants, foraging with the sunlit stems swaying above them. These cheery-voiced winter visitors from the far north were landing on the goldenrods and nibbling at the seed heads. 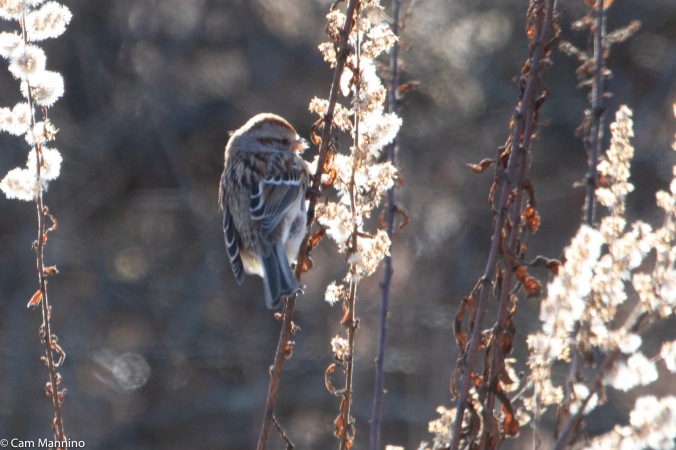 That made some of  the seed fall to the ground, where the tree sparrows prefer to feed, so the tall grass below rippled with busily foraging members of the flock.

And Tree Sparrows hung out in the bushes and trees nearby waiting their turn, some gathering a little warmth on their breasts from the setting sun.

A Tree Sparrow in bright sunlight with a dark twig shadow across its face.

An American Tree Sparrow in a nearby tree while clouds blocked the sun. This picture clearly shows the two-colored bill, rusty cap, rusty eyeline, and unstreaked breast that we use to identify tree sparrows.

They weren’t the only species enjoying that patch of sunlit goldenrod, though. Another winter visitor from Canada, a Dark-eyed Junco (Junco hyemalis), swooped into the lit plumes and began sampling the seed heads.

In the background, a tentative American Goldfinch (Spinus tristis), dressed in its sedate winter plumage, waited its turn too. So many birds being fed at once! I imagine they all enjoyed the faint warmth of the winter sun shining through the plumes as they ate their evening meal.

An American Goldfinch waits for its turn to share the goldenrod seeds.

Foraging for a Frozen “Dessert”

A male Downy Woodpecker  (Dryobates pubescens) preferred to look for insect eggs or larvae in the stems of Canada Goldenrod (Solidago canadensis). He moved quickly from plant to plant pecking furiously. Later in the winter, I often find goldenrod galls with neat holes in them where Downys have excavated larva from their winter hideaway inside. But this Downy Woodpecker was searching for something inside the stems themselves.

A Downy Woodpecker pecked at the stems of Canada Goldenrod, looking for insect eggs or larvae.

A pair of Eastern Bluebirds seemed to be checking out possible real estate for the spring. The female sat on the box for some time, occasionally fluttering down to poke her head inside.  The male waited calmly nearby, taking periodic foraging trips down into the grass. (Click on photo to enlarge; hover cursor for captions.)

A female Bluebird checked out a nestbox on the prairie.

Her mate waited nearby, occasionally diving into the grass to feed in the meantime.

Later I saw a female  – perhaps the one from the nest box? – pecking on a branch until she loosened a frozen, tiny green caterpillar, which she then promptly swallowed. She was so busy pounding on its hard surface that I never got a clear photo of the caterpillar in her beak – but here she is just after eating her frozen dessert. Looks like it might have felt a bit chilly on the way down, doesn’t it? 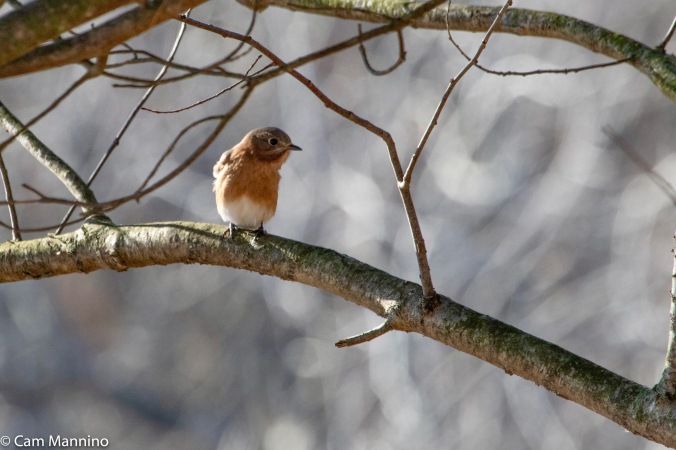 In the same clump of bushes, a Black-Capped Chickadee (Poecile atricapillus) performed acrobatic feats while trying, it appeared, to extract some kind of insect from the end of a twig. Here it is hanging upside down as it pecked diligently for its supper. I love its feathered leg-warmers.

A Black-capped Chickadee pecked at the end of this twig until something to eat came out of it.

So whether a bird prefers seeds or likes to finish the day with a cold bug or two, Draper Twin Lake Park has food ready and waiting.  Nice how nature works like that…