Two years ago, the birding group stepped onto the ice at the edge of Cranberry Lake to see a beaver lodge (above). Pretty cool! But since then, we hadn’t seen much activity around the lodge – no felled or gnawed trees, for example.

Well, an American beaver (Castor canadensis) is definitely in residence this winter! During the first week of January, one appears to have swum through the canal near the end of the lake trail. A good-sized hole had been broken in the ice, leaving large shards on either side. (See below.) And nearby there were definite signs of a foraging beaver!

The beaver must have gone right to work gathering some bark to feed on this winter. Beavers eat leaves during the summer, but in winter they feed on the soft inner bark of trees. As my husband and I looked around, we spotted several examples of this accomplished lumberjack’s work! One was only partially gnawed; perhaps a predator or a curious human interrupted its work – or maybe it just decided it had enough fodder and retired to its lodge. [Click to enlarge; hover cursor for captions.] 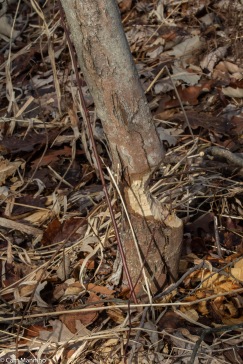 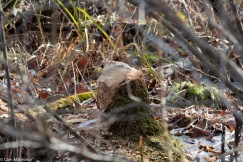 The largest of the trees the beaver felled. 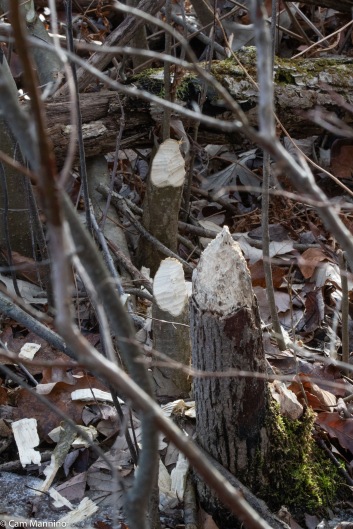 Beavers have huge, self-sharpening, iron-fortified incisors that they use for this work. The iron makes those big buck teeth very strong and bright orange, as you can see in this taxidermy beaver on display at Seven Ponds Nature Center in Dryden.

My guess is that our Cranberry Lake beaver (it’s usually a male that gathers food during the winter) came up through the ice and felled a few trees. He then grabbed each log with his powerful jaws, dragging it under the ice and swimming with it out to his lodge. At that early time in January, it was impossible for me to get out on the thin ice to see his cache. What beavers usually do, according to the PBS Nature documentary “Leave It to Beavers” is to  sink a few trees  in the mud beneath the lodge with some of the branches left above the surface.  That allows the beaver to feed under the ice, safe from predators like coyotes. The dark limbs above the surface also help to bring some warmth below on sunny days, keeping the ice near the cache less solid and acting as a marker for their stash of food. Clever little animals! Here’s the lodge two years ago with some trees sticking out of the ice in just that way.

Some of the trunks and branches may just be placed on the lodge for future use. That’s what this year’s beaver appears to have done – though looking through the trees made it difficult to see.

A couple of weeks later, when we’d had some colder weather, I ventured out to the lake edge again to see if any more trees had been felled. None had, but I noticed a long trail of frozen bubbles under the ice. Normally these are methane bubbles released by the bacteria that feed on plants decomposing under the ice. Perhaps this marks some leaves or twigs from the felled trees that the beaver hauled out to his lodge. But of course, the air bubbles could also be coming from the beaver, right? I wondered if this new lodge tenant had ventured out again, but found the ice too thick to break through. Muskrats, which are much smaller than beavers, also swim under the ice in winter, so I’m not sure who or what left this trail.

Two year old beavers, I learned from the Nature documentary, leave their home lodge and venture out to find an empty lodge that they can rebuild or to build a new one. On a cold day last March, I spotted what I at first assumed was a small beaver swimming toward the shore opposite the lodge. Because of its size, though, I decided it was a muskrat – but now I wonder if my first guess was correct.  No way of knowing really, but I like to think so!

Young beavers sometimes need to venture out of their lodges more in the winter, because they didn’t fill their larders quite full enough in the autumn. So perhaps the swimmer I saw last March is the new tenant and local lumberjack – and perhaps not.

But if this hydro engineer sticks around, he may be making a few spots in Cranberry Lake a bit deeper each year. Beavers dig deep channels beneath their ponds because the deeper the water, the safer beavers are from predators.  According to the documentary, out west during the 2002 droughts, farmers and ranchers with beavers in their ponds had the only water available for livestock – and of course wildlife gathered at those ponds as well. Beavers keep a lot of water on the landscape by deepening streams and creating ponds with their dams. Of course beavers can also cause trouble with their architectural abilities, flooding roads and human housing, but luckily the documentary explains how clever stewards in Canada are using the beavers’ natural attraction to the sound of trickling water to encourage them to build in safer places.

Usually young beavers don’t mate until their third year. If the beaver who felled the trees this January sticks around and is lucky enough to come across a mate, maybe we’ll discover a whole family of beavers one of these days! I’d just love to photograph a beaver sitting out of the water, but since they usually appear just before dawn or after sunset, no luck so far. Fortunately, a photographer named Blake A. Mann got a lovely photo of one chewing contently on a stick and graciously shared it through iNaturalist.org. He’s definitely inspired me to keep looking!

2 thoughts on “A Beaver in Residence at Cranberry Lake Park”