Look for this feature early each week! Cam Mannino shares her latest observations, photos, and inspirations from Bear Creek Nature Park. Thanks Cam!

This Week at Bear Creek

Welcome to the first post for “This Week at Bear Creek.” As a long time BC walker and photographer, I’ve long considered a narrative photo blog with that title. So I’m happy that Dr. Ben has offered the idea a home here in the Notebook. I’ll try to keep you informed about the abundant wildlife and plants in the park as well as stewardship opportunities and other events. The plan is to post once a week in the spring, summer and fall (with a hiatus or two for Real Life and vacations) and a bit less in the winter when the park is quieter and walking’s more challenging. So let’s begin with:

Last Wednesday I accompanied Ben and Sigrid Grace, an enthusiastic birder, on a bird walk through Bear Creek. We saw 25 bird species that early morning, so I’ll focus on bird arrivals and departures this week. 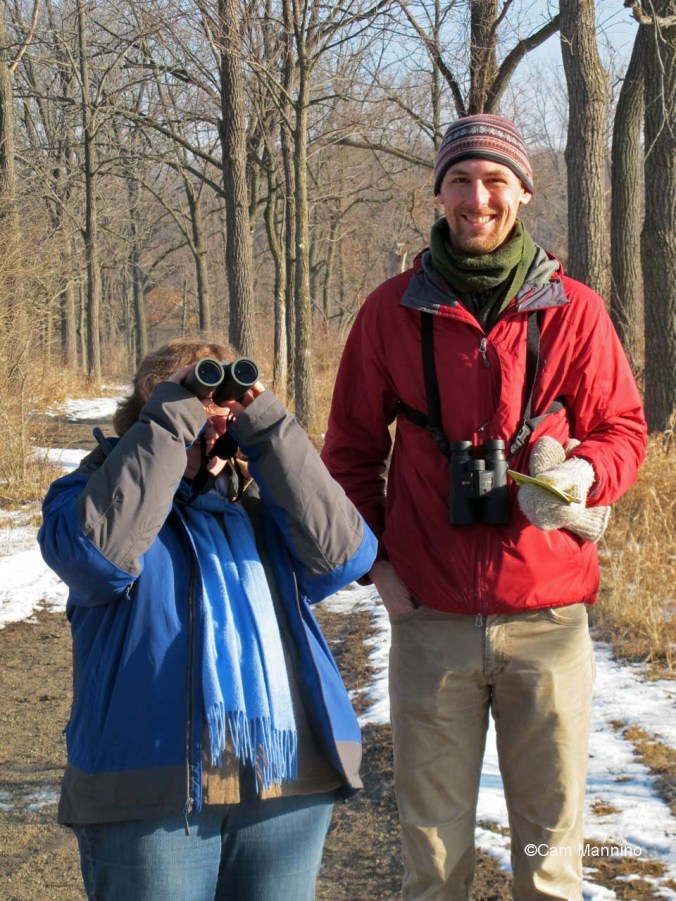 As we entered the park, Ben spotted a red fox running at full lope across the field toward the woods, his tail streaming behind him. Too fast for a photo that day but here’s a photo of a red fox at a trot from 2013.

Spring migration is off to a great start. The Song Sparrow’s arrived and is already singing with gusto. 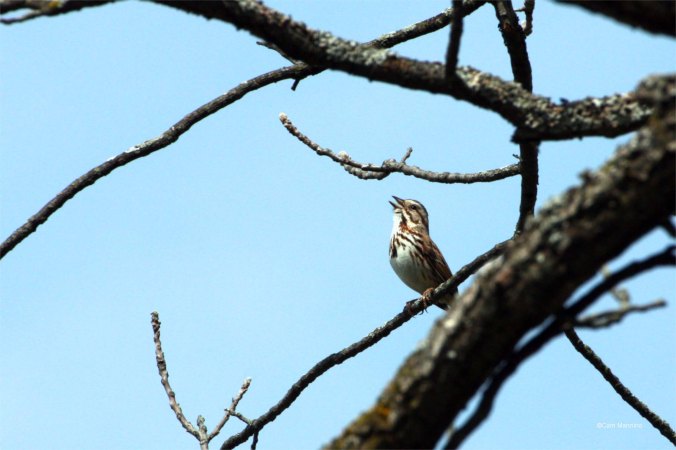 Ben heard the rattling call of a Sandhill Crane.

A Great Blue Heron flew high overhead, perhaps just back from its winter stay on the Florida or Gulf coast.

And the Common Grackles with their white eyes, iridescent blue heads and rusty-gate voices are tilting their beaks skyward in an attempt to establish a pecking order.

Red-winged Blackbirds trill, Canada Geese honk and Mallard Ducks cackle in the marsh near Gunn Road, establishing their territories among the reeds. 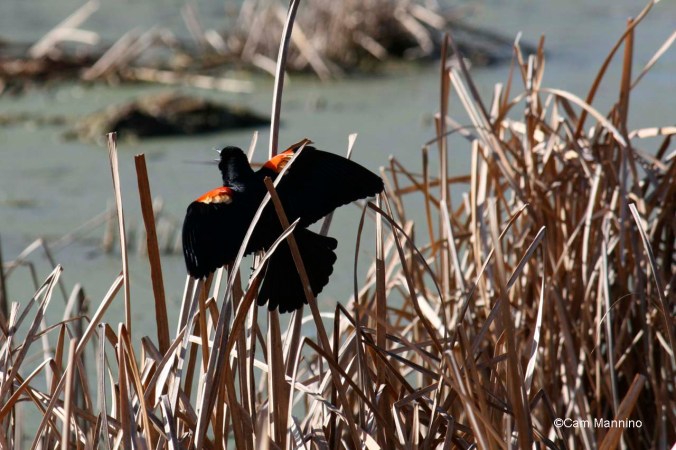 We saw a large flock of Cedar Waxwings fluttering between bushes and trees. No way of knowing whether these elegant birds spent the winter here or just rode in on the south wind the night before. 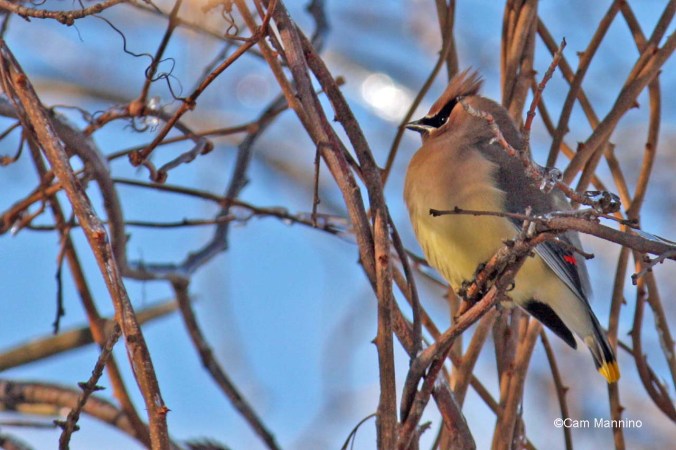 Soon the Dark-eyed Juncos will be leaving for Canadian forests and the modest Tree Sparrows will be heading to Canada’s far north to build their nests of ptarmigan feathers on the tundra.

Human visitors will notice that the Eastern parts of the Oak-Hickory Forest near Gunn Road received a “prescribed burn” the previous week. This professionally controlled, slow-moving, low burn discourages invasive plants and trees like Autumn Olive and Buckthorn. Be patient and in a few short weeks, all that black ash, full of nutrients, will nourish new growth. The thin spring sunlight filtering through the bare limbs should bring us more Spring Beauties and Blood Root, two of the earliest and most beautifully delicate spring woodland flowers. We’ll let you know when they began to emerge.

Thanks for sharing This Week at Bear Creek.   If questions occur to you, comment below and I’ll try to find answers. And of course, please share your week at Bear Creek in the comments as well.

Get outside now. That’s what I thought on Monday when I saw the weather forecast for the second half of the week. So on Tuesday I headed out to flag the boundaries of our spring prescribed burn units. Take home messages from my Tuesday outing:

Are you seeing signs of spring in your yard? Let me know in the comments below. When it is too cold to get outside this weekend, you can participate in the Great Backyard Bird Count (http://gbbc.birdcount.org/). You can be a citizen scientist from the comfort and warmth of your home by counting the different species using your feeder. You can then submit the data online to help scientists learn more about the timing of bird migration, how birds use different habitats, and how weather and climate influence bird distributions. All that by just counting birds outside your window!

Here is my picture evidence from my Tuesday outing:

Pussy willow (Salix discolor) fuzz is peaking out of buds to see if it is time to burst.

Rabbit tracks in the snow. A nice article about distinguishing rabbit tracks from squirrel tracks can be found here: http://www.natureskills.com/tracking/rabbit-tracks-and-sign/

You’d hardly know that this oasis of mud, leaves, and sprouting skunk cabbage is surrounded by a deep layer of snow!

This skunk cabbage (Symplocarpus foetidus) is growing in a spring fed by groundwater at O’Connor Nature Park.

Come to Bear Creek Nature Park this Saturday, September 27 to help with natural areas stewardship! We will continue removing buckthorn around the “skating pond” in the middle of the park. If you’ve visited the pond recently, you may have seen the green herons and wood ducks that have been hanging out there. Maybe you spotted the turtles sunning themselves on a log. Maybe you watched curls of fog rising from the water on a cool morning. By removing buckthorn and other non-native invasive shrubs, we improve wildlife habitat and your ability to watch wildlife. Hope to see you there!

We’ll provide water and light snacks. You will need to sign a release form before we begin working. Families are encouraged to attend! All minors will need permission from a parent or guardian to participate, and minors under 14 will need to have a parent or guardian present. We will have lots of fun, so plan to come and share this opportunity with others! The schedule of upcoming workdays can be found at the Volunteer Calendar.

Last Saturday morning I headed out to Lost Lake Nature Park to get set up for our volunteer workday. After a glance at the hot weather forecast, I wanted to soak up as much cool morning  as I could. I walked out onto the dock with my wife Debbie, we were startled by the loud squawk of two green herons, interrupted during their morning meal.

As I watched the herons fly away, two large shapes on the far edge of the lake caught my eye – deer, probably. No, wait! They were sandhill cranes!

I took this blurry picture of the sandhill cranes at Lost Lake Nature Park  through my binoculars.

If you look closely, you’ll see the sandhill cranes in this picture.

At first both cranes stood at attention, wary of the load visitors on the dock. After a while, one crane continued feeding, while the other kept an eye on us. They switched on and off, always with one looking out over the lake. Soon, the cranes spread their wide wings, ascended of the lake, and turned to fly out of view past the trees.

The morning continued with a fun volunteer workday. We knocked out quite a bit of buckthorn around the edge of the lake. If you missed us this time, plan to head out to Bear Creek Nature Park from 9 am to noon on July 12 for the next volunteer workday. 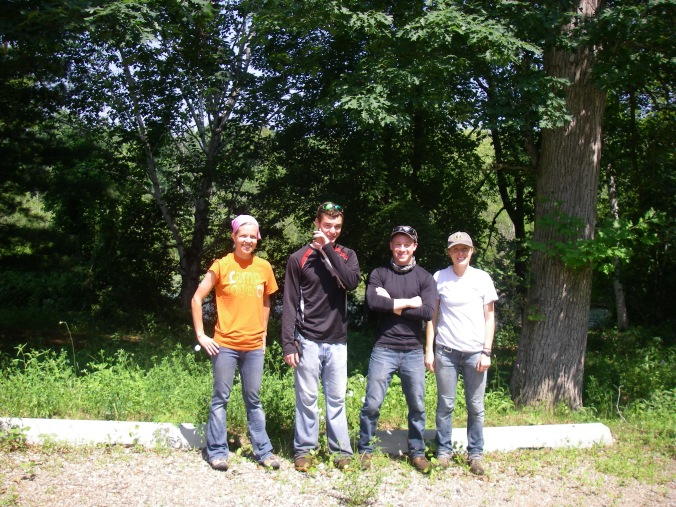 Join us for lots of fun at the next volunteer workday!

While pulling seedlings of woody invasive plants at Lost Lake Nature Park, the stewardship crew found a polyphemus moth (Antheraea polyphemus)! As you can see from the picture, these are big moths! In fact, with a wingspan up to 5 1/2 inches, polyphemus moths are one of the the largest moths in North America. The caterpillars feed on vegetation, but the adult moths do not eat. In their short adult phase, male moths use pheremones to locate a female moth. After they find each other, moths reproduce and die. This moth is missing a few pieces of its wings. What a cool find!

***EDITED: Thanks to Mary Speyer for identifying the moth as a Polyphemus Moth, not a Cecropia Moth as I originally said.