Here in Oakland Township, the stewardship staff spends a lot of time controlling invasive plant species. Common buckthorn, glossy buckthorn, Oriental bittersweet, common privet, autumn olive, and multiflora rose have been around for a while, and are well established in Oakland Township and in our parks.

Once in a while a new invasive species threatens our parks. A few years ago the latest invasives were garlic mustard and Phragmites. Usually by the time we begin to notice them, they are very difficult to eradicate. When plant populations establish, they go through a period known as a “lag phase” where the population grows relatively slowly. Most of the species mentioned above are in phases of rapid population growth or are found nearly everywhere, the “Active” and “Reactive” phases in the figure below (from EddMapS). To limit the impacts to our natural areas and costs of control, we want to catch species when their populations are small, the lag phase.

Population growth of an invasive species. The “proactive” phase corresponds to the lag phase where population growth is relatively slow. When populations of invasives expand quickly, people begin to notice and actively manage populations. When a species becomes ubiquitous, control efforts can usually only focus on reducing impacts in sensitive areas. The image is from EddMapS (http://www.eddmaps.org/about/why_plants_invasive.html).

Two very bad invasive species, black and pale swallow-worts, are becoming established in Michigan and in Oakland Township. These two vining species are in the milkweed family. In New York state and other locations where they have established, these species can form pure beds of swallow-wort, reducing the abundance of native plants, birds, insects, and other wildlife. In particular, monarchs may lay their eggs on swallow-wort, but apparently the young do not survive because swallow-wort does not provide adequate nutrition. 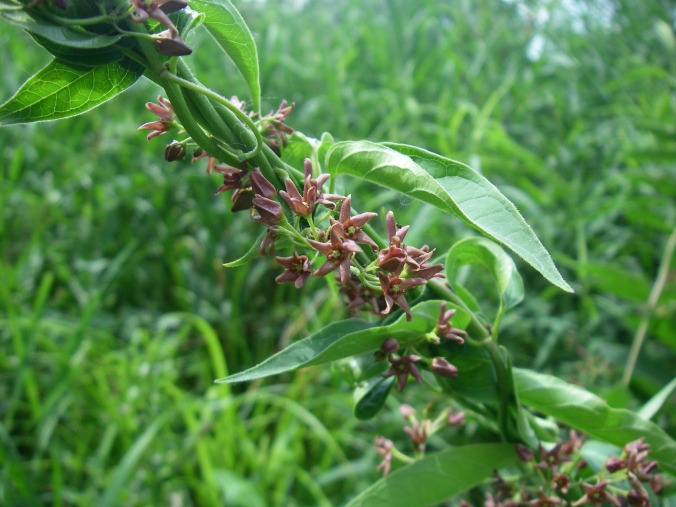 Pale swallow-wort flowers are pink, with narrow petals that are longer than they are wide. The clusters of flowers are attached at the leaf base. Picture taken on June 16, 2014. Click on the picture to view a larger image.

Pale swallow-wort leaves are opposite with smooth margins, 2-5 inches long, and 1-2.5 inches wide. The stems are covered with downy hairs. If stems are broken, they have clear, watery sap.

Swallow-wort has herbaceous, vining stems. If not treated, pale swallow-wort will form dense patches and exclude all other plant species.

So far, we have only encountered swallow-wort in a few parks: Lost Lake Nature Park, Charles Ilsley Park, Stony Creek Ravine Nature Park, and a few spots along the Paint Creek Trail. We try to practice EDRR, which stands for Early Detection & Rapid Response. If we catch swallow-wort quickly, we have a good chance of treating the plants and eliminating populations before they are well established. To learn more about swallow-worts and how to control them, check out this fact sheet.

If you see swallow-wort in the parks, please use the Monitoring page to let us know!