There’s just something endearing about almost any baby creature and now is the time to go “awww” in Bear Creek (or in your backyard for that matter!)

Adult birds stuff the mouths of hungry fledglings, tiny frogs (and I do mean tiny!) spring across the mud and  through the grass at the edges of vernal pools, and young woodchucks and bunnies sally forth to forage in the grass.  The park is full of babies!

(Note:  Though I can venture a short way into the park now, my mobility’s still pretty limited by the accident.  So though all these baby creatures are at Bear Creek now, some of the photos were taken near my home.)

Fledglings and Others in the Nursery

On the Wednesday Bird Walk at Bear Creek this morning, Ben and other birders spotted fledglings all over the park. The fledglings are there for us to see and hear if we take the time to listen and watch.  Sometimes you can hear their squabbling when adults bring food to the nest.  At other times, you can hear the insistent peeping that accompanies their begging posture – tail up, wings down, fast flutter of the wings.  Here’s an example from home of a female House Finch (Haemorhous mexicanus) with her begging fledgling: 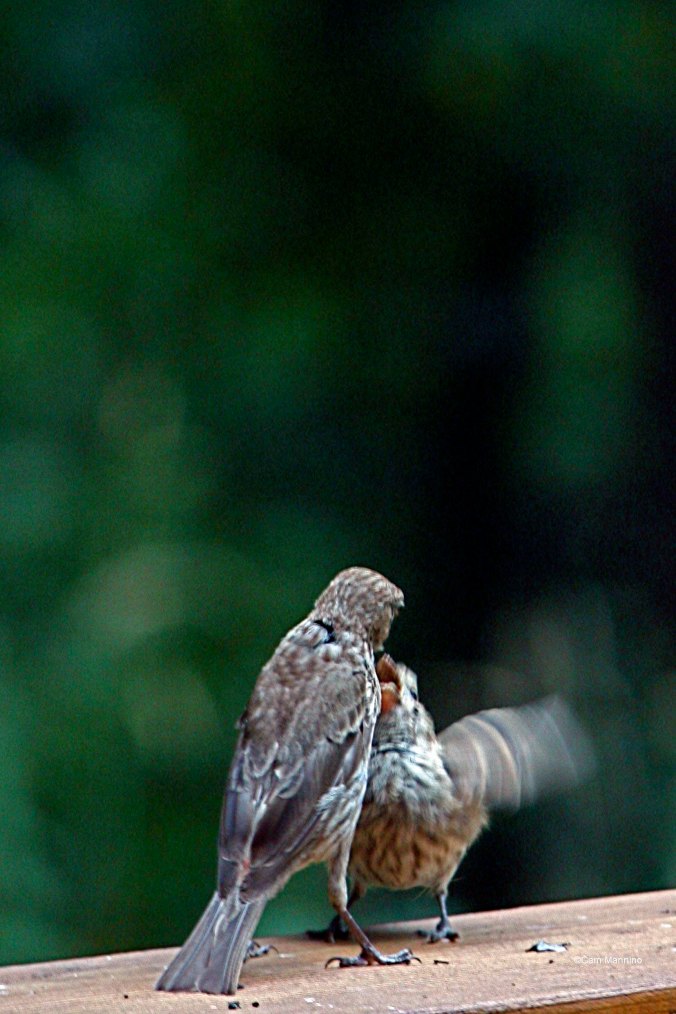 Adult birds model feeding behavior for their young – pulling worms, cracking seeds, swallowing bugs in mid-air – but it takes time for fledglings to choose independence and stop begging to be fed directly by their parents.  (Sounds like some human adolescents I’ve known…) Here’s an adult Tufted Titmouse (Baeolophus bicolor) on the right approaching its young with a seed… 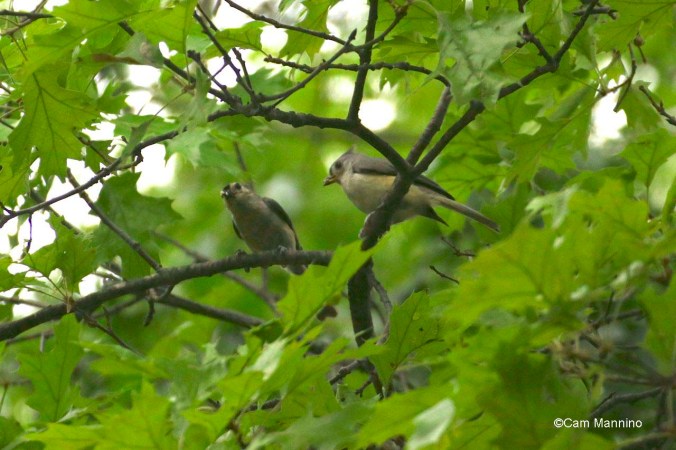 An adult Tufted Titmouse brings a seed to a fledgling with an empty hull in its beak. Like babies, they stick crazy things in their mouths.

And then, in a rather awkward move, the adult stuffs its big seed into the fledgling’s beak. 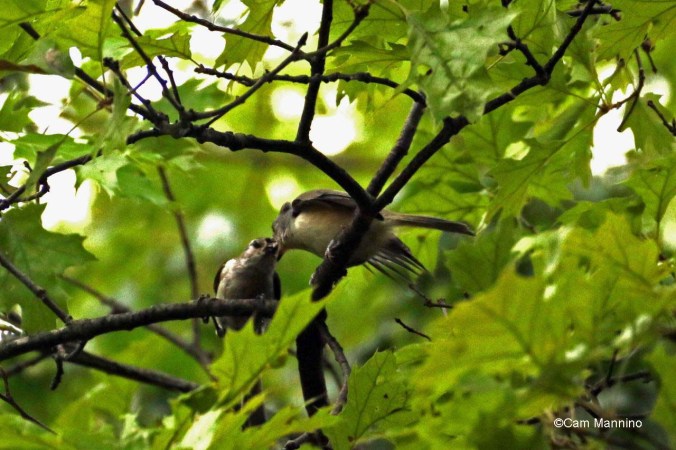 The adult titmouse awkwardly pushes a seed into its fledgling’s beak.

The Tufted Titmouse is a relative of the Black-capped Chickadee and like them, cracks seeds open between its feet and hides some to eat later.  Tufted Titmice make their nests in tree cavities and line them with animal hair, sometimes plucked from passing animals and sometimes found in old squirrel or raccoon nests.  One of the reasons it’s good to leave dead trees in a forest is that the Titmouse can’t excavate a hole itself,  so it needs woodpeckers’ holes from the previous season.

Fledglings are trying out a lot of adult behavior and exhibit a lot of curiosity, just like all youngsters.  Here’s a female House Finch fledgling shot this week who knows she should look around carefully before feeding, but maybe is exaggerating the stance just a bit! 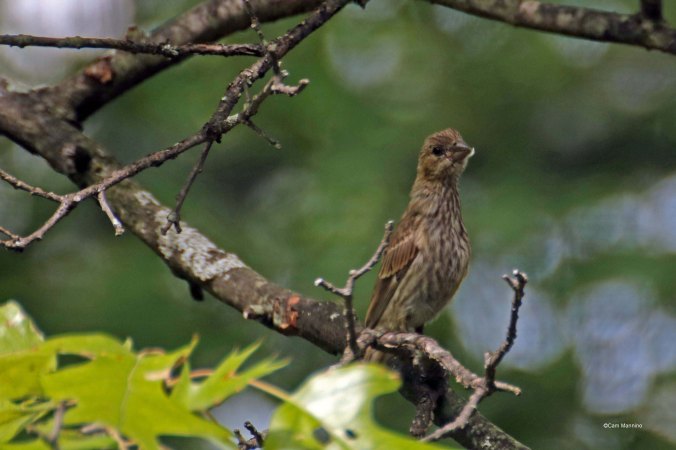 A curious fledgling House Finch trying to be cautious before feeding and maybe overdoing it.

Besides being very curious, juveniles often have different plumage from adults and their wing feathers are usually smaller.  See the short wings on this  female fledgling Rose-Breasted Grosbeak (Pheucticus ludovicianus)? 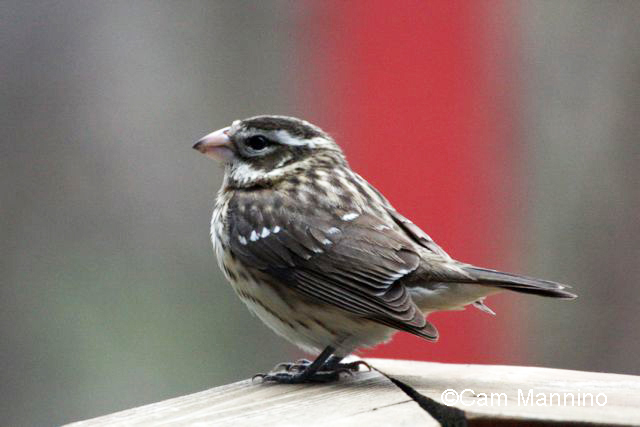 Fledglings, like this female Rose-Breasted Grosbeak, still have to develop the long wing feathers they’ll need as adults.

And this thin, young Northern Flicker (Colaptes auratus) has the mustache of a male, but it hasn’t gone through the fall molt yet.  Males will keep that mustache.  Females will lose theirs. 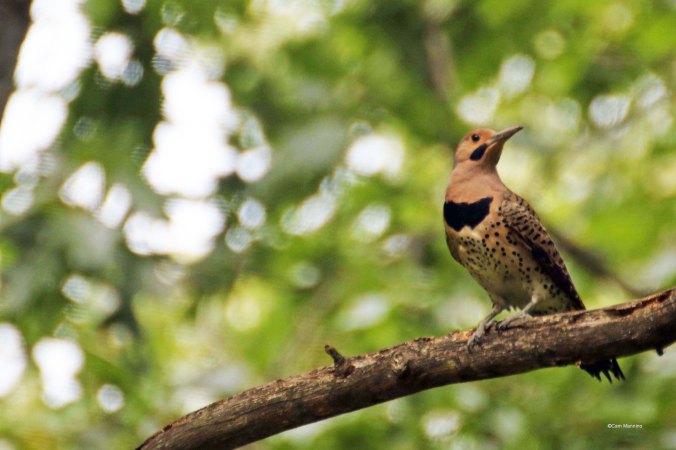 This young Northern Flicker needs to go through the fall molt before we’ll know whether it keeps the male mustache or loses it because it’s a female.

Of course, the mammal babies explore Bear Creek at this time of year, too.  Here are two young Woodchucks (Marmota monax) learning to forage near our woods on July 1 last year.  Also called Groundhogs, these lowland marmots,  the largest members of the squirrel family (Sciuridae) in our region, are generally herbivorous (vegetarian) and are amazing diggers (as many of us know too well around home!).  They make large burrows, equipped with a spy hole, a nest/sleeping area, a toilet chamber and up to 45 feet of tunnels! 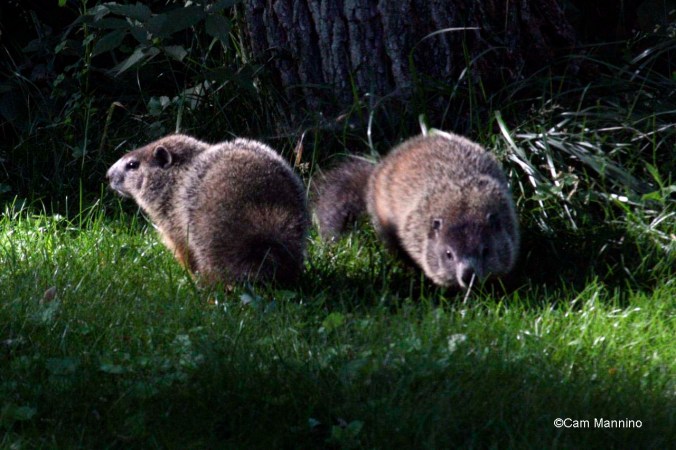 Young groundhogs explore the grass near the woods at my home on July 1 – but you’ll see them all over Bear Creek too!

And, of course, there are always little Cottontail Rabbits (Sylvilagus floridanus). I like this description from the Michigan DNR of the mating ritual of rabbits, something I’ve never witnessed: “This usually occurs after dark. The buck chases the doe until she eventually turns and faces him. She then spars at him with her forepaws. They crouch, facing each other, until one of the pair leaps about 2 feet in the air. This behavior is repeated by both animals before mating.”  Pretty athletic!  Rabbits have 3 or 4 litters a year on average so there are always plenty of bunnies. Here’s one sucking in a grass stem bit by bit. 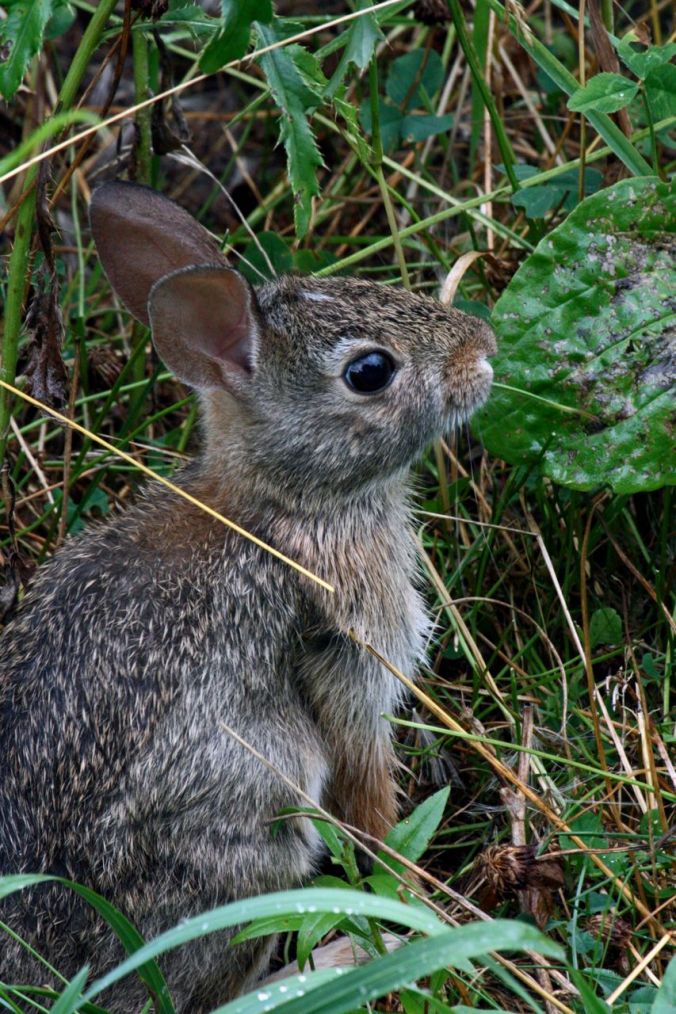 A Cottontail bunny pulls a long stem into its mouth.

And then, of course, it had to clean up a bit after eating. 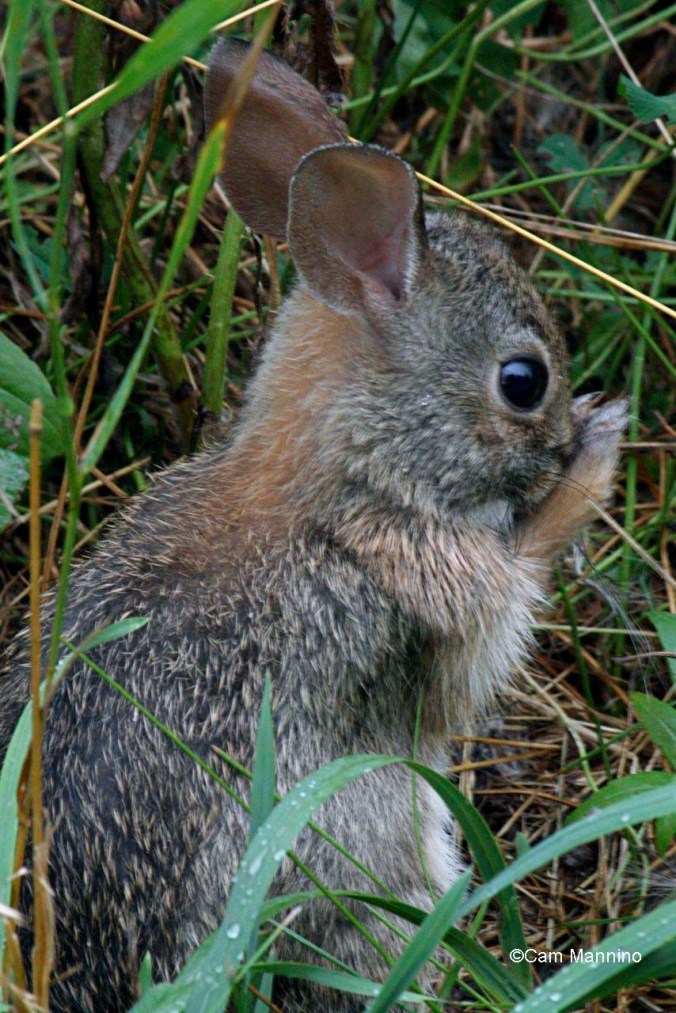 A Cottontail bunny grooms its face after eating.

On Tuesday of this week, the grasses around the vernal pools in the north end of the park were alive with baby Wood Frogs (Lithobates sylvaticus) of various sizes.  This tiny one was struggling to get out of a tire rut some thoughtless person had made in the pedestrian entrance on Gunn.  He’s only about 3/4 of an inch long!  I don’t think I’ve ever seen a frog this small before! 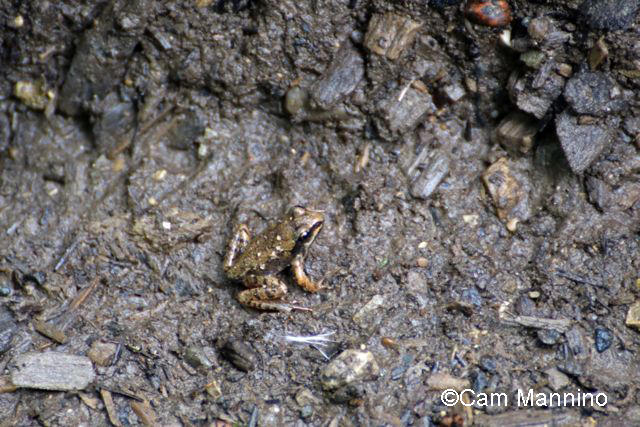 A tiny Wood Frog with his black eye stripe struggles to get out of a tire rut left by a thoughtless person near the Gunn pedestrian entrance to Bear Creek.

About that Strange Creature…

By the way, at one of the vernal pools in the north end of the park under some wood, we found a Blue-Spotted Salamander (Ambystoma laterale).  It was about to rain and very dark in the woods,  so I apologize that the photo is not as sharp as I would like but it’s such an interesting creature, I had to share it with you anyway. 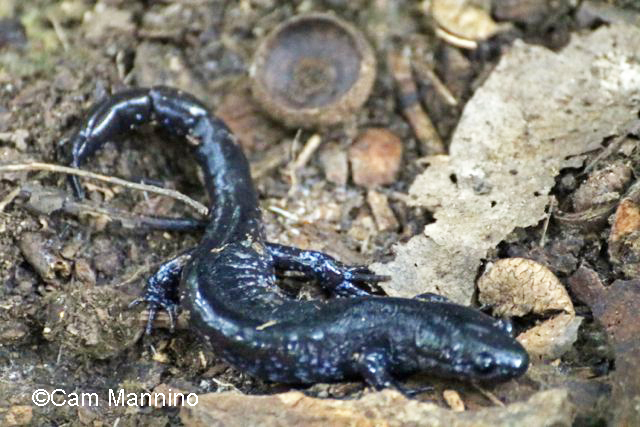 The Blue-spotted Salamader hides under logs or bark in moist areas and can regenerate its tail – which detaches if attacked!

Salamanders are strange creatures.  According to the Michigan Department of Natural Resources,  “When danger is sensed, the blue-spotted salamander’s tail lashes back and forth and produces a noxious secretion from two glands at the base of its tail. Even if the predator gets by this defense, it may only end up with a small morsel. When grabbed,  the salamander’s tail will detach. While the predator is detained by the writhing tail,  the salamander zips off to safety. In time a new tail will grow to replace the lost one.”  So, uh, don’t grab one.  They’re pretty darn slippery (one is tempted to say “slimy”) anyway!

So let’s move out into the meadows and marshes and see what’s blooming!

A fun native wildflower is blooming in its own inimitable way in the northern area of the marsh. Common Bur-Reed (Sparganium eurycarpum), like  many of our native plants, can survive fire in wetlands because it spreads underground through rhizomes (root-like underground stems).  Muskrats munch on the rhizomes and water birds eat the seeds which of course helps keeps its growth under control. 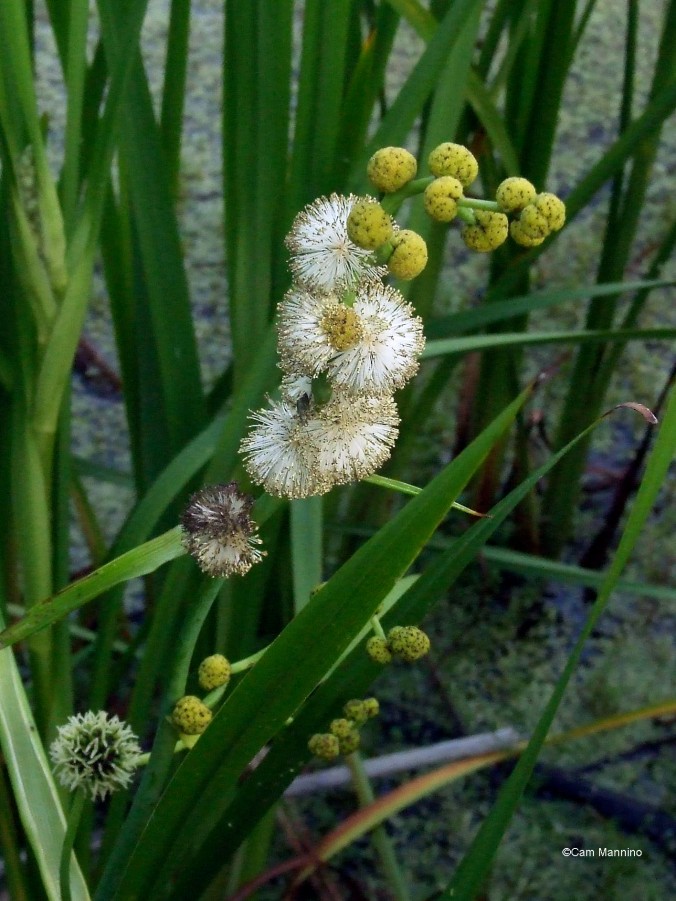 Muskrats eat the underground stems of Common Bur-Reed and birds eat its seeds – a native contributor to marsh life.

Last year, at the edge of the woods near the intersection of the path behind the pond and the eastern arm of the Northern Loop, Whorled Loosestrife (Lysimachia quadrifolia) made its appearance.  Like many native plants in our area, it favors sandy soil and oak/hickory forests, which is exactly what Bear Creek offers.  I hadn’t noticed it until last year,  but perhaps you did? 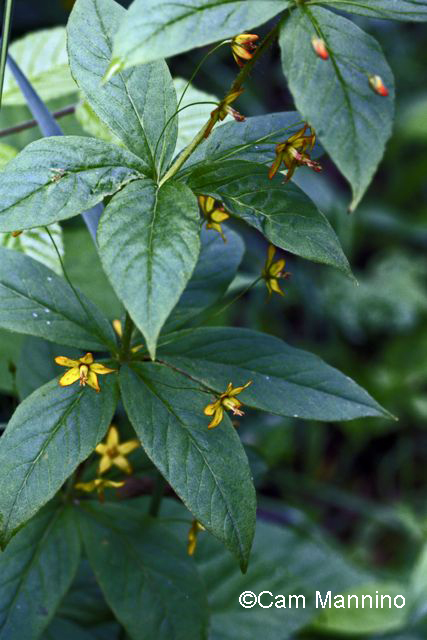 Whorled loosestrife (unlike Purple Loosestrife, an invasive) is a native plant that likes the sandy soil and oak/hickory environment of Bear Creek.

Probably like me, you’ve passed by another native plant for years without paying much attention.  Yarrow (Achillea millefolium)  pops up all over Bear Creek – and lots of other places around the world, actually – and doesn’t look that glamorous – until you look closely at its myriad of little white flowers. Our Yarrow may have hybridized at some point in its past.  The more light pink those little flowers are the closer it is to the native variety. I like it in any case. 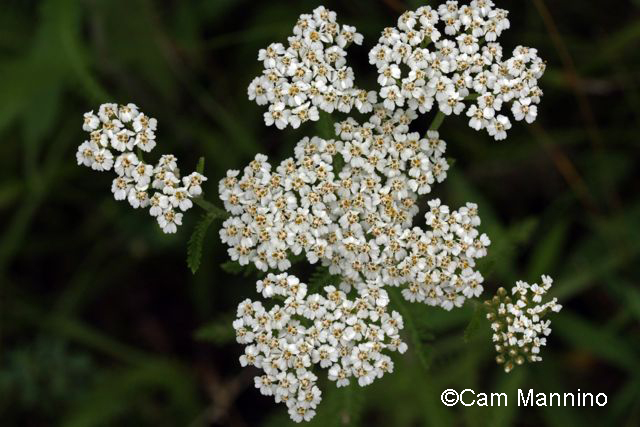 Yarrow is a modest native that looks like a wedding bouquet when you get close to its tiny disc flowers.

One of Ben’s and my favorite native wildflowers is budding all over Bear Creek and blooming in the southern native bed.  It’s Butterfly Milkweed (Asclepias tuberosa) and just watch!  It will live up to its name once the warmer weather comes.  Butterflies and bees love it even more than we do! 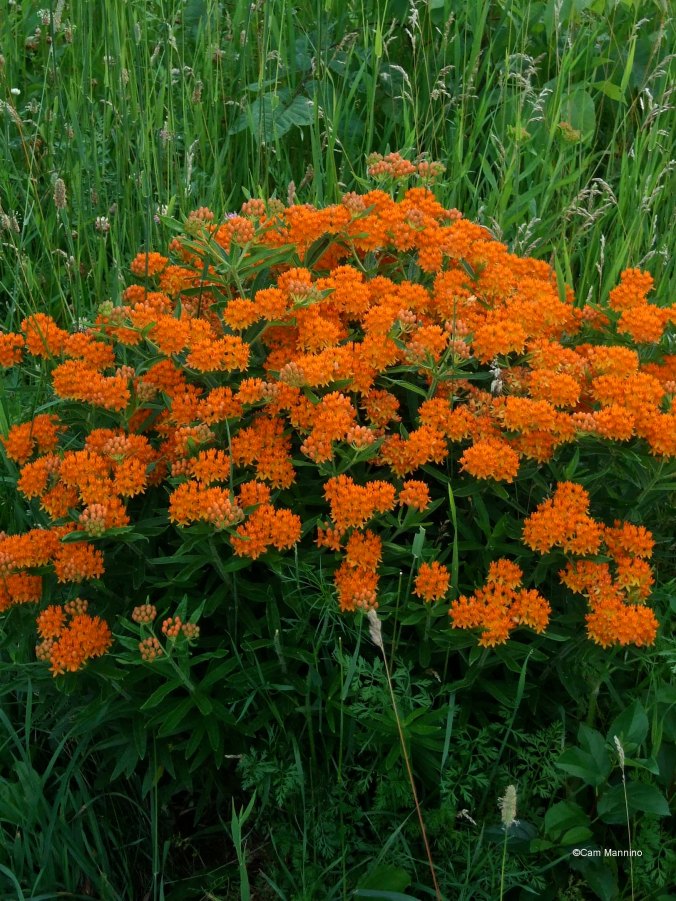 Butterfly Milkweed will justify its name when butterflies (and bees) flock to it in July.

So put on your bug juice (all this rain has unfortunately made for a bumper crop of mosquitoes) or come when it’s windy and sunny and watch for the young ‘uns.  They grow up fast, just like our children.