First week of July, the launch point for what I think of as High Summer.

Though it’s gray and rainy as I write (again!), I’m still anticipating the dry heat of the heart of the season when the Old Fields of Bear Creek are sprinkled with color,  grasses and tall flowers bend and sway in the wind, big nectar-sipping butterflies balance on blossoms and swallows swoop and dive overhead.  Hope springs eternal that we will see more days like the 4th of July weekend, eh?

History as Told by Wildflowers

Botanists use the term “Old Fields” for the largely treeless expanses of Bear Creek when you enter from Snell Road and west of the playground pond.  I love the term because it implies a history and for me, the wildflowers express that history in different ways. Compared to native grasslands, savannas, or prairie, Old Fields typically have an abundance of non-native, often agricultural, plants and a few scattered native plants that recolonized after farming or grazing stopped.

It only makes sense to begin with Michigan’s Native Americans.  Meet Indian Hemp (Apocynum cannabinum).  During its growing season, all parts of this plant are toxic so you and that dog on your leash should leave it alone (in case either of you were tempted to eat it!) What’s historically interesting is that native people figured out that in the fall, when the toxins drained down into the roots, this plant could be harvested usefully. According to Wikipedia, Indian Hemp was  “used as a source of fiber by Native Americans to make hunting nets, fishing lines, clothing, and twine.”   Hemp is still used in similar products today.  I love its dark red stems and tiny white flowers. You’ll find it along the north side of the path that curves down around the vernal pond below the high seating area on the south side of the Park. 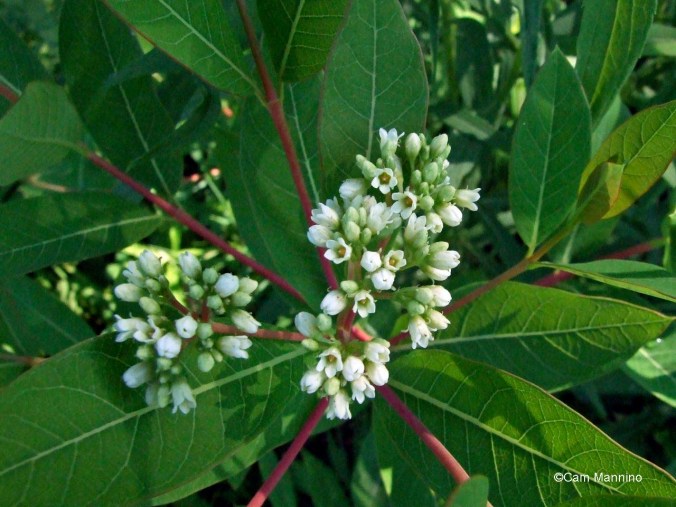 Native Indian Hemp had many uses for the Indians who harvested it in the fall when the toxins in the plant had drained down into its roots.

When settlers arrived in Michigan, the dry, sunny, sandy soil of these areas of Bear Creek were prairie – tall grasses, a few native trees and native flowering plants.  Those settlers probably saw our native Black-eyed Susan  (Rudbeckia hirta) when they arrived.  And they are still here,  currently growing in profusion up near the benches on the hill at the south end of the park.

Edit:  Ben tells me that many plants in the Aster family (Asteraceae), to which Black-eyed Susans belong, have two different sets of flowers – the big petals are actually individual ray flowers with reproductive parts at the base, and the black center is made of individual disc flowers (the outer ring of disc flowers are flowering in this picture).  Click here for a basic explanation, or here for a more technical explanation. So every apparent “petal,” small and large,  is actually a separate flower, producing its own seed!  Quite an amazing amount of seed production in what looks like one big flower! 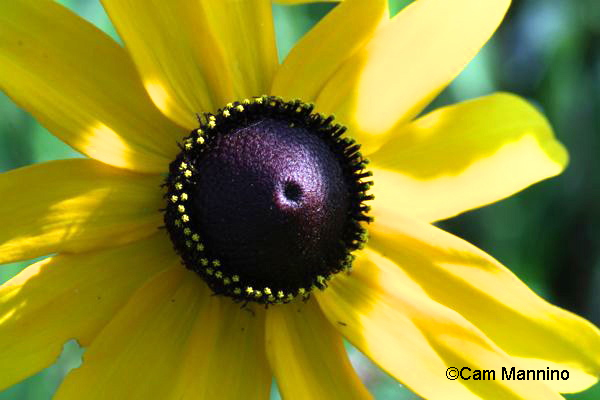 The bright eyes of the native Black-eyed Susan would have been here to greet early settlers.

Another beloved native, Butterfly Milkweed (Asclepias tuberosa) could have greeted those settlers, just as today its hot pink buds burst into orange blossoms in the native bed and here and there in the field west of the Center Pond.  True to its name, last Sunday it hosted a Meadow Fritillary (Boloria bellona). 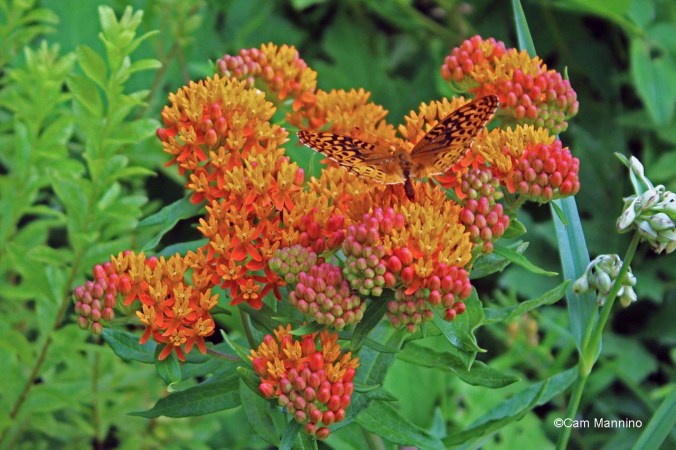 Native Butterfly Milkweed living up to its name by hosting a Meadow Fritillary.

According to Wikipedia, after the Civil War,  a U.S. farmer and agriculturalist, Timothy Hanson,  is said to have introduced a European grass as a source of  hay and cattle fodder. Today it’s still here and plentiful and is probably named in Mr. Hanson’s honor; it’s called Timothy (Phleum pratense). It’s a beautiful grass but as a European import, it’s less useful to our native wildlife.  Here it is  in flowering mode with showy red anthers (pollen making organs) at Bear Creek at the top of the hill near the seating area again. Like all grasses, Timothy is wind-pollinated and throws copious amounts of pollen to the wind, hoping that a few pollen grains will land on receptive stigmas of another Timothy plant (stigmas are part of the “female” reproductive structures in plants). Since grasses and other wind-pollinated plants don’t need to advertise to pollinators like insects, birds, or bats, their flowers are not very showy, and sometimes plain hard to see! 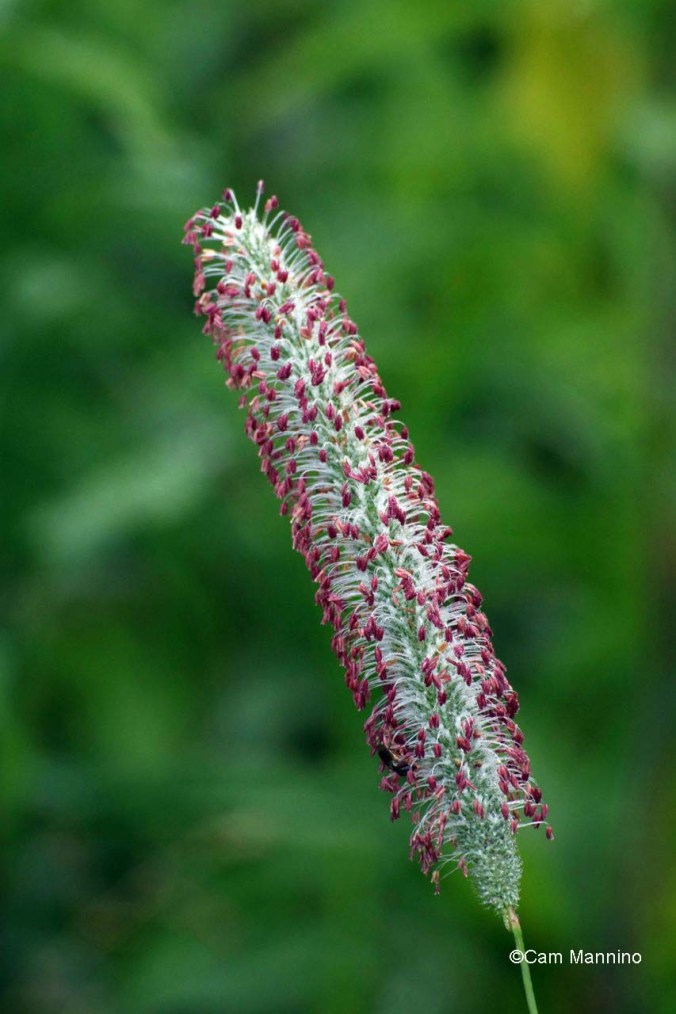 After two hot days over the weekend, it had finished flowering for the season, a blessing for folks with spring allergies! 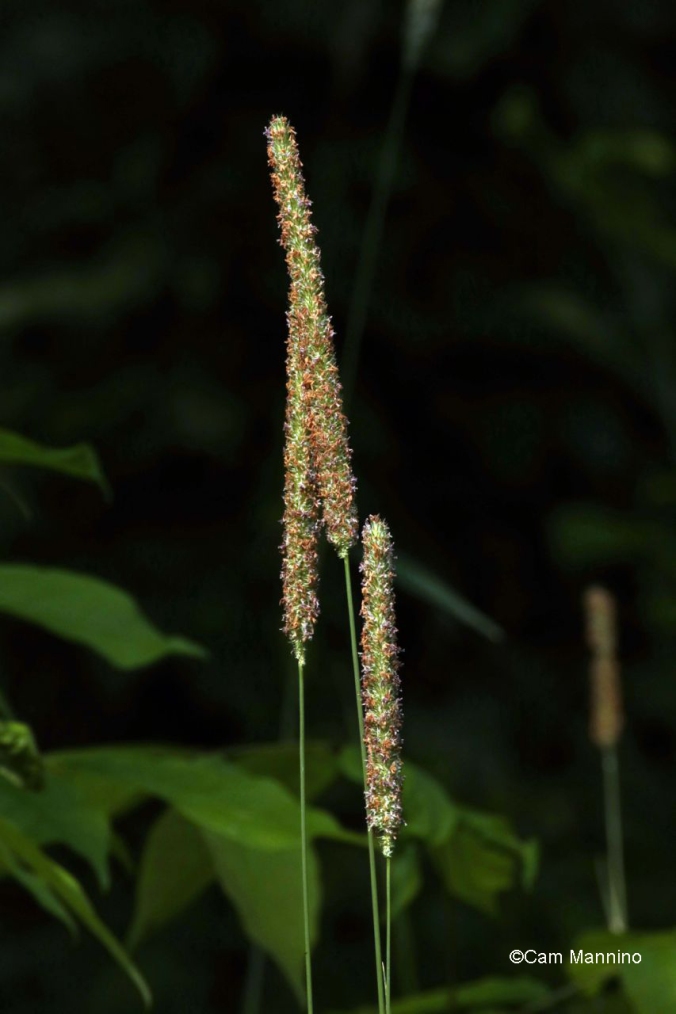 Timothy grass finished flowering by this Monday after a warm weekend.

Timothy and other non-native grasses took the place of tall prairie grasses like Big Blue Stem which is slowly returning to Bear Creek after prescribed burns.  Many of our ground-nesting birds like Pheasants, Meadowlarks and Northern Bobwhites prefer these tall native grasses and losing them, as you’ll hear from me often, reduces the biodiversity we were blessed with here. This fall photo at Seven Ponds Nature Center will give you a feel for the height of this tall native prairie grass that  once flourished in Bear Creek and now is making a comeback . 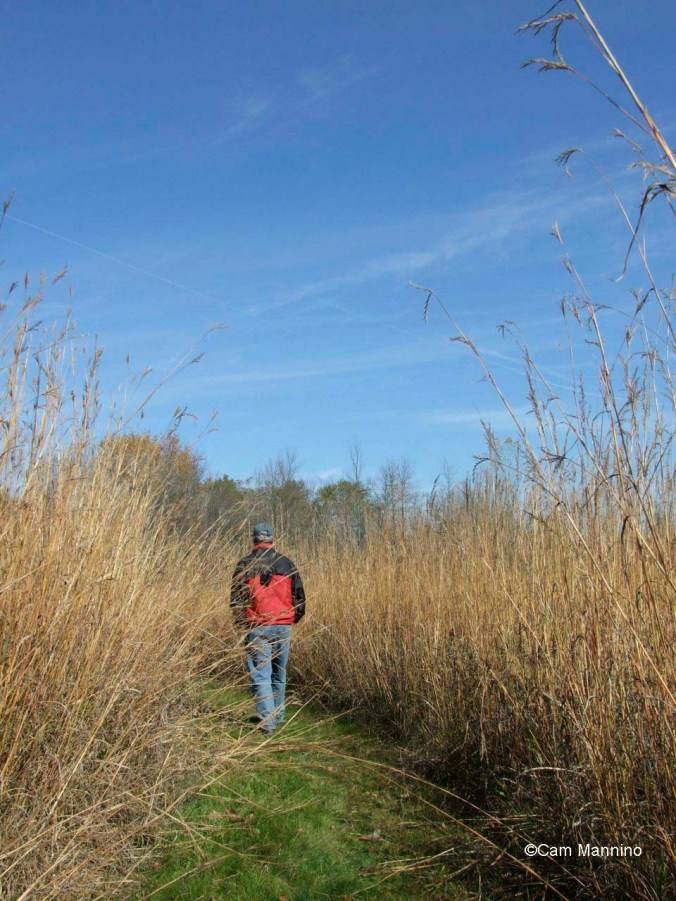 Farmers were still farming here in the 1940’s, of course,  and like the settlers, they needed pasture, hay and silage for their animals.  These days Butterfly Milkweed has to contend with the Birdsfoot Trefoil (Lotus corniculatus),a plant from Eurasia and Northern Africa,  which farmers probably seeded while creating pasture for sheep and cattle.  It’s a lovely plant up close, though this particular specimen could be a cultivar (a garden version) that snuck in among the others which aren’t quite as regular and glamorous. 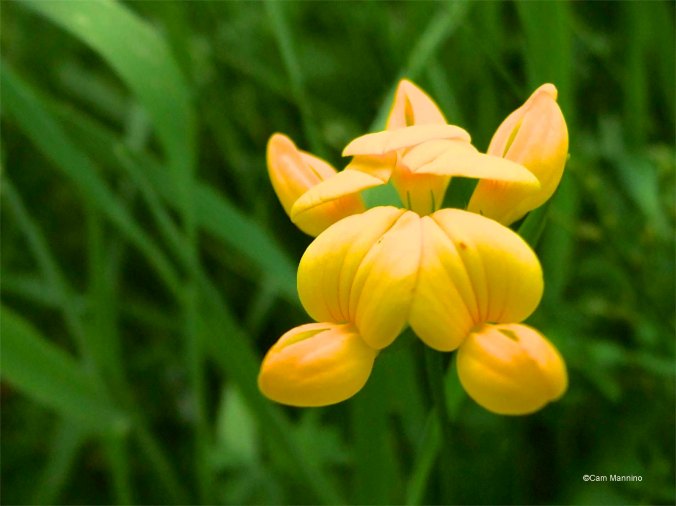 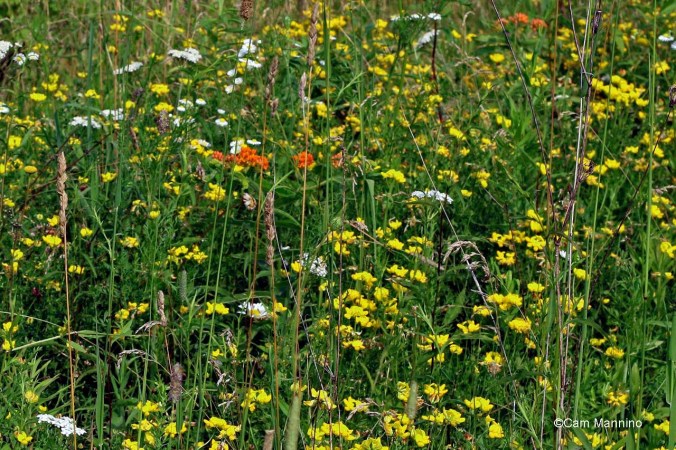 Next week, along with this week’s discoveries, I hope to explore the historical “roots” (as it were) of other native and non-native species in the shady areas of Bear Creek.  I never knew how much history was blooming right under  my nose!

If you walk along the lane of Walnuts (Julgans nigra) at the center of Bear Creek early in the morning or late afternoon, you’re likely to see some very small, a bit rough-around-the-edges fledglings off on their first solo explorations, no adult nearby.  These young birds are notoriously hard to identify because their plumage is often quite different from their parent.  For example, I’m 99% sure this is a baby Bluebird (Sialia sialis) we saw on Sunday, because of its white eye ring, brown speckled breast, and most importantly, the blue feathers in its wing and tail – and also because it’s smaller, curious and has a not-quite-finished look. 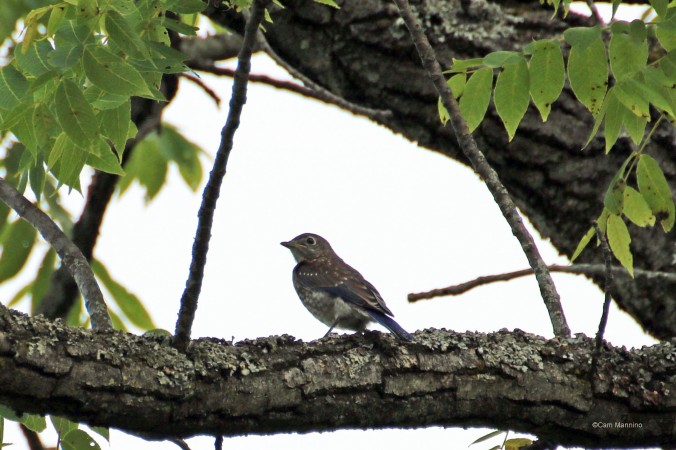 A fledgling Bluebird (I think) surveys a walnut tree along the center lane.

But I could be wrong – so feel free to correct me!

Here’s another fledgling high in a walnut tree.  Warblers are particularly hard to identify as fledglings,  but I’m going with a fledgling Yellow Warbler (Setophaga petechia). 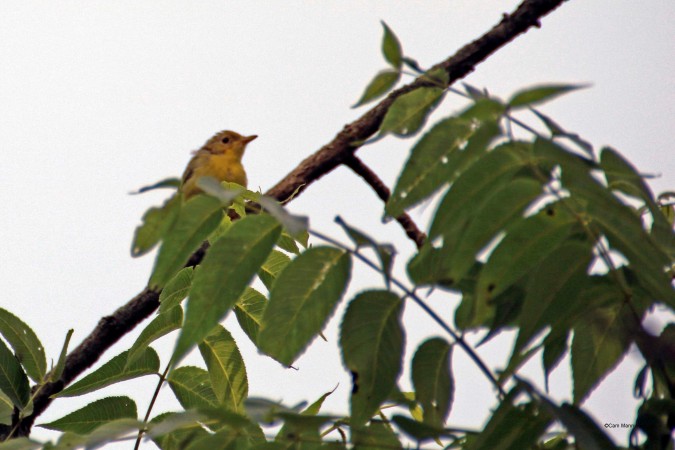 Remember the adult version from an early spring post? 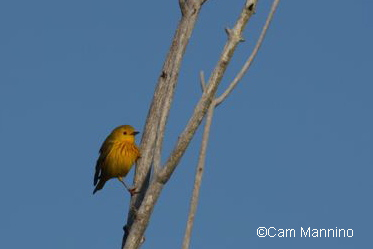 One of our faithful birds, here summer and winter, was also hopping around the walnut trunks searching for bugs or places to store big, fat seeds.  Here’s the agile White-Breasted Nuthatch (Sitta carolinensis) in an unusually upright position: 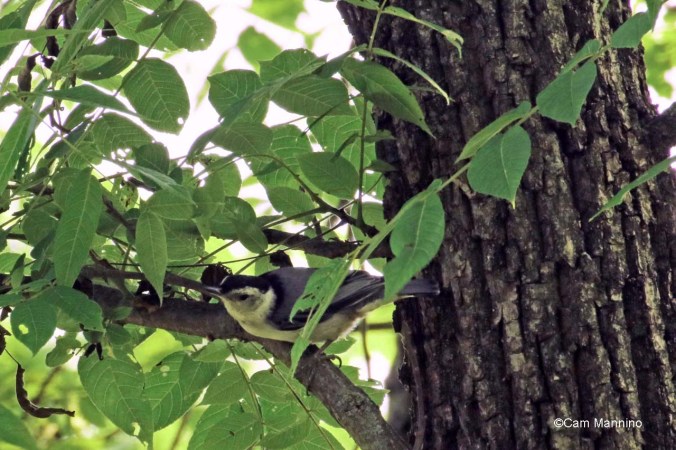 The White-Breasted Nuthatch in a seemingly rare pose – right side up!

More often, you’ll see a Nuthatch foraging upside down like this: 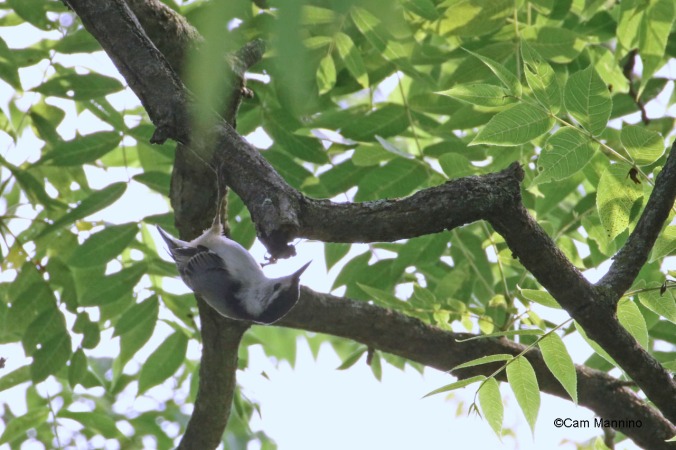 A common way of feeding and exploring for the White-Breasted Nuthatch – upside down!

And a summer visitor was farther out in the small trees just east of the Walnut lane, the russet and black Orchard Oriole (Icterus spurius) with his beautiful yellow-olive mate (not pictured). 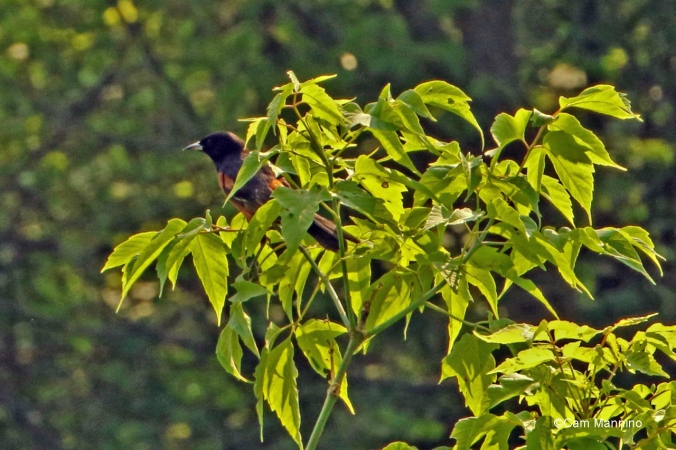 The male Orchard Oriole flitted through the small trees with his mate (not pictured) who is yellow and olive green.

Another faithful resident, the American Robin (Turdus migratorius) is beginning a second brood for the year so look for a female, like this one in a red oak this week,  sitting in her nest with just her head and tail showing. 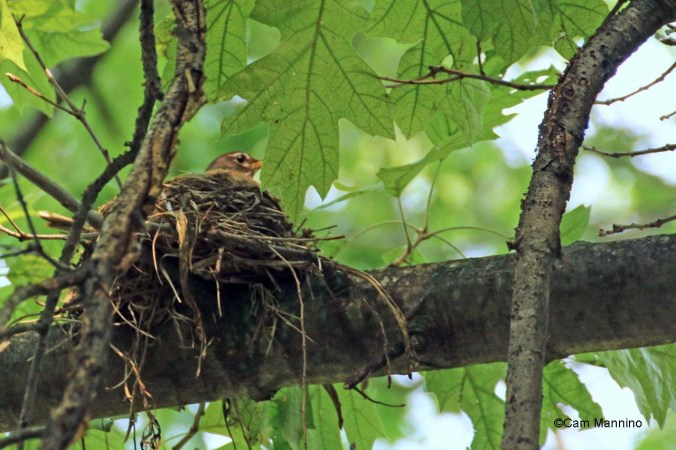 Robins are beginning their second broods of the season.

In the north marsh, Reg spotted what looked like an upside-down Snapping Turtle  ((Chelydra serpentina), its light lower shell (plastron) exposed and its legs flopping in the air.  It was very far away and we puzzled over the sight through binoculars, until suddenly the turtle righted itself and we saw two turtles turn and swim away from each other!  Apparently we saw mating Snappers which breed between April and November.  Since the distant white blob didn’t make much of a photo, here’s a reminder of the beak-nosed appearance of this prehistoric reptile. 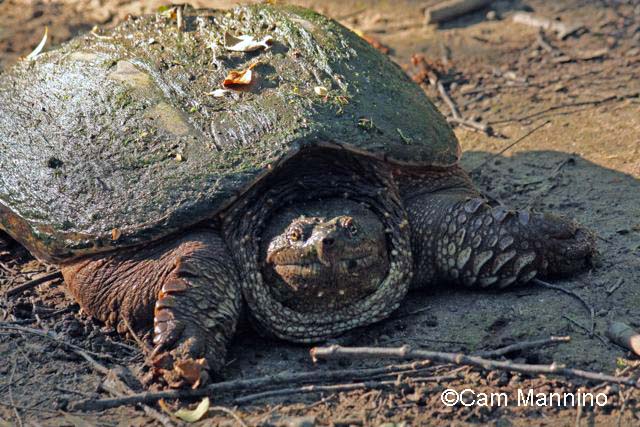 We saw two of these amazing Snappers mating in the marsh about a week ago.

I must admit that the Center Pond is at its most homely right now.  I hope you saw the White Water Crowfoot (Ranunculus aquatilis), an aquatic buttercup, in bloom earlier, because now it’s left mats of brown strings across the surface.  But despite that, we laughed at seeing 14 young Green Frogs (Lithobates clamitans), sitting at attention on that brown surface all over the pond, each in their own separate little territory, probably enjoying the sunlight.  The bright yellow belly and the tympanum (a frog’s eardrum) on the cheek  that’s bigger than the eye tells you this is a young male on a log near the deck.

The tympanum (a frog’s eardrum) that’s larger than its eye and a bright yellow belly means this is a young male Green Frog.

I marvel at the semi-precious stone appearance of the Amber Snail (genus Succineida) who lives in moist areas – like this one, found on a dewy leaf near the playground pond.

July is the month for a beloved non-native wildflower, Queen Anne’s Lace (Daucus carota) and the first blooms and buds are beginning to show among all that tall grass.  I’m glad this is one of the non-native plants that can co-exist with our native ones! 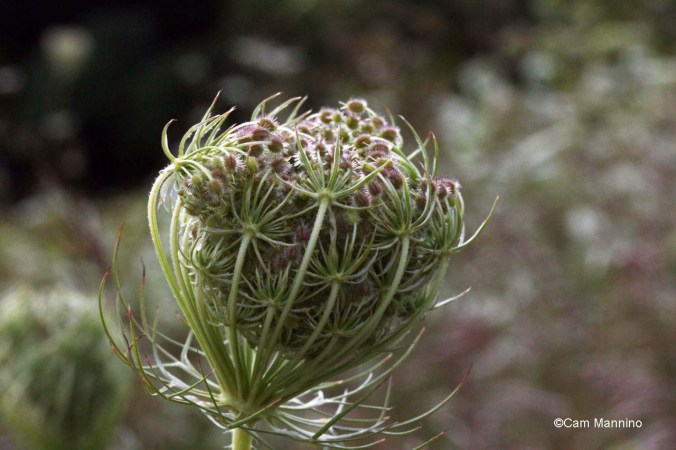 A bud of non-native Queen Anne’s Lace which is also called Wild Carrot!

History under our feet, fledglings surveying the park from high in the walnut trees, and all the other pleasures of summer in Bear Creek await you – on the next sunny, breezy summer day that we all hope is just over the horizon!

One thought on “THIS WEEK AT BEAR CREEK: Story-telling Wildflowers, Solo Fledglings and the Usual Odds ‘n’ Ends”