The Walnut Lane in the center of the park is a hangout for avian adolescents this time of year. Every few feet you hear or see another fledgling sparring with siblings, practicing a song or poking about for food on their own as their tired parents retreat from constant feeding. Below I’ve  provided links to Cornell Ornithology Lab photos of the adult birds  so you can see how the juveniles differ from the adults in appearance.

The numbers of the most successful park predator keep growing – and no, it’s not coyotes! And native wildflowers love the second half of the summer (yes, we’re already there!) and are showing their colors everywhere you look.

Avian Adolescents – and one baby…

I have to begin with a nestling.  Remember the female Cedar Waxwing (Bombycilla cedrorum) on a nest from last week’s post?  Well, this week her nestling stuck its little half-masked head above the nest edge so I got to see a Waxwing nestling for the first time! It sure doesn’t look like the elegant bird it will be in a few weeks! It’s still mostly mouth and that beak still looks soft, doesn’t it?

A nestling Cedar Waxwing where I saw the adult female sitting last week.

Amusingly, adolescent birds  have the same awkward, gawky, not-quite-put-together look of a human adolescent. And like them, they seem to hang out together – this year, in the lane of Black Walnuts. Here’s a juvenile Gray Catbird (Dumetella carolinensis), a bird which when it matures is sleek with gray feathers and a black cap. This youngster is in shadow, but you can see he still has downy fluff that makes him look a bit like he’s wearing baggy pants!

This juvenile Gray Catbird still has downy leggings instead of the sleek gray shape of an adult. (See link above)

And here’s a young Rose-Breasted Grosbeak (Pheucticus ludovicianus). The juveniles look like their brown-and-white mothers, but I believe that little red dot under this one’s wing  tells you it will eventually look like the stunning male at this link – black and white with a hot pink bib at his throat.

This young Rose-Breasted Grosbeak will grow up to be a beautiful black and white male with a rosy pink bib at his throat. (See link above)

This young Downy Woodpecker (Picoides pubescens) looks a bit scraggly, but seemed to be  finding all kinds of things to peck at or eat  on a walnut tree. I’m thinking it’s just a gawky adolescent.

This juvenile Downy Woodpecker hasn’t quite got the finished look of an adult and is still learning how to find food.

Look at the lovely pattern its wing made as it flew off.

The wing of a young Downy Woodpecker produces a beautiful pattern as it takes flight.

And here’s a home photo of an adult Downy  to show how much more “together” an adult downy can look!

An adult  Downy Woodpecker looks a bit less at loose ends than the juvenile..

By the way, if you live in a house with wood siding as we do, you may be frustrated by a male Downy drumming on your house. According to Cornell Lab, the Downy isn’t feeding, which means you don’t have bugs in the siding. This is the Downy’s way of singing; it uses percussion to attract a mate. Of course, they’re still making holes in your wood!

I’m referring, of course, to Dragonflies. Right now, the BIGGEST of these drone-like insects, called “Darners” (after the large needles), are hatching out of the ponds and patrolling the fields of Bear Creek. They can be three to five inches long and have a wingspan slightly larger than their body. I’m quite confident that this is a Lance-tipped Darner (Aeshna constricta ) we saw Sunday along the western sloping path. Dragonflies are notoriously difficult to identify, however, so feel free to correct me! 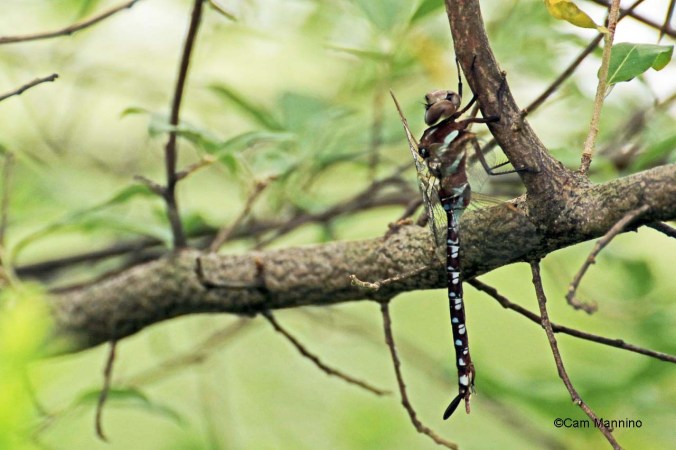 The Lance-tipped Darner is a large dragonfly and like all dragonflies, a wildly successful predator, catching 95% of its prey which, happily, includes mosquitoes!

I’m quite sure that I saw a Swamp Darner (Epiaeschna heros) zooming over the Old Field off the eastern path earlier this week.  Here’s a photo of a non-zooming Swamp Darner from a couple of years ago.

Watch for this Swamp Darner who usually appears at the end of July or early August.

Of course, regular dragonflies are hatching out of the ponds as well. Dragonflies successfully snatch out of the air 95% of their prey,  (especially mosquitoes!) and consume them on the wing. Lions, for example, only catch their prey 25% of the time and Great White Sharks only 50%,  so we’re talking about very successful predators here! How about this face?! This is a common dragonfly, the White-Faced Meadowhawk (Sympetrum obtrusum.)

A White-faced Meadowhawk dragonfly stares me down with its giant eyes which can see you both when heading toward you and flying away from you!

On a sweeter insect note, we also were gifted with the sight of two Great Spangled Fritillaries (Speyeria cybele) mating. We couldn’t determine which gender is larger, but there is quite a size difference! Here are two photos, as they synchronized opening and closing their wings.

The Great Spangled Fritillaries synchronized the opening and closing of their wings while mating.

Native Wildflowers Assert Themselves as the Summer Warms

The second half of  the summer ushers in a big bloom of native wildflowers. In the hot sunlight of high summer, prairie flowers flourish, since long ago, much of Oakland Township’s land was prairie. I recommend  bringing your lunch, sitting on the hilltop benches at the south end of the park, and just enjoying the Yellow Coneflowers (Ratibida pinnata) as they sway in the wind.

Native Yellow Coneflowers encircle the benches on the hilltop at the south end of the park.

And right across the path, another native, Black-Eyed Susans (Rudbeckia hirta) bloom in happy profusion.

Black-eyed Susans are sometimes confused with Yellow Coneflowers – but now you can compare the two plants near the hilltop benches at the southern end of the park.

Large lavender swaths of Wild Bergamot (Monarda fistulosa), also known as Bee Balm, keep company with these other two.  This wildflower is certainly a “balm” to bees since you rarely see a group of them without seeing bees busily probing the hearts of these fun, “bad hair day” flowers! Like the native plants I mentioned last week, Bergamot has been considered a medicinal plant  and was used as an antiseptic by Native Americans.

Wild Bergamot lives up another of its names, Bee Balm.

In the native flowerbed near the shed, some glorious plants are blooming for your enjoyment as well. Look at these lovely native False Sunflowers (Heliopsis helianthoides).

False Sunflowers shine gold  in the sunlight against the shade of trees near the shed.

And tall plumes of native Meadowsweet (Spiraea alba), standing in the sunlight, hum with pollinating bumblebees.

Tall plumes of native Meadowsweet sway in the sunlight in the native flowerbed near the shed.

Native meadowsweet is a perfect spot for a bumblebee carrying a load of pollen.

Nearby, a native plant with an exotic flower also grows tall in the flowerbed by the shed. It’s Wild Senna (Senna hebecarpa) and with a flower like this, it should be called wild!

The exotic-looking flower of Wild Senna growing in the native flowerbed by the shed.

And look how they grow in profusion along the stalk of the plant! 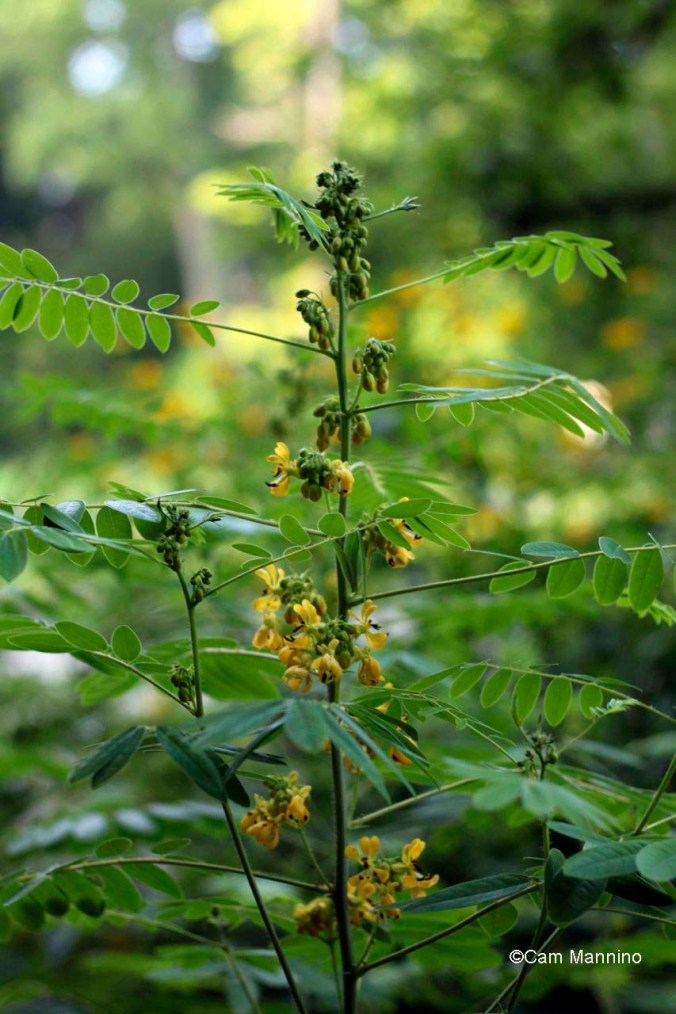 Wild Senna produces lots of blooms right next to the stem.

And here’s one last exotic-looking native shrub that I’ve always loved. My parents backyard which backed up to the Paint Creek Cemetery used to be full of native Staghorn Sumac (Rhus typhina) which always looked to me like it belonged in the tropics!  No, it’s not poisonous. Here’s a link  where you can see that Poison Sumac looks completely different and lives in wet areas, unlike this sumac that is at the edge of the woods next to the western sloping path.

A native shrub, Staghorn Sumac is a beautiful and benign plant.

One of the tallest native wildflowers is just barely starting to bloom among the Yellow Coneflowers at the top of the southern hill.  Prairie Dock has HUGE leathery leaves and can reach 10 feet in height. You can see the tall stalk with its round buds towering over the other plants in the sunlit native flower bed near the shed as well.

Prairie Dock towers over the other plants in the native flowerbed near the shed. Those huge, leathery leaves in front are prairie dock plants as well.

Here’s the first beginnings of a bloom out by the benches on the southern hilltop.

Prairie Dock begins to bloom at the end of its gigantic stalk, the tallest wildflower in the park.

So bring a lunch and/or a friend and hang out with the avian adolescents on the lane this week or simply sit on the benches at the top of the southern hill and watch the Yellow Coneflowers sway and listen to the hum of bees in the Bee Balm. You deserve to nourish yourself with a lazy afternoon at Bear Creek Nature Park!

One thought on “THIS WEEK AT BEAR CREEK: More Avian Adolescents, An Influx of Fierce but Fascinating Predators and Native Plants Flourishing Everywhere”