If you wonder why it’s so tricky to get photos of migrating birds in the autumn, have a look at the colors of the western Old Field above.  The bright gold of the goldenrod has now faded to a soft silvery brown.  In their subdued winter plumage, small birds can be nicely camouflaged as they feed.  Vines full of fruit hang from bushes and trees – with just enough leaves to make a perfect hiding place. So to see these small visitors, a park walker’s best tools are their ears.  Birds aren’t singing now but they do click, whistle, chip and cheep as they move through the tall grass and vines.

I’m not expert enough to  identify birds by these autumn calls.  I can only locate birds by hearing clicks and cheeps and then wait for them to emerge long enough to take a quick photo or glimpse them through binoculars. This week, some chirping sounds in the woods led me to a delightful chipmunk competition as well.  So here’s where my ears led me this week at Bear Creek.

Listening for Migrants:  Still Here but in Smaller Numbers

This Yellow-rumped Warbler (Setophaga coronata) kindly appeared on a bare branch over the marsh.  Its field marks in the fall are that yellow spot below the wing and the rectangular yellow patch above the tail visible in the photo below.  Yellow-rumped Warblers tend to be quick and noisy while foraging and even make a chek sound when flying.  Page down to “Calls” at this Cornell link to hear their fall cheeping. I love the thought that some of these birds spend the winter on tropical coffee plantations!

Here the yellow patch above the tail of the Yellow-rumped Warbler is visible.

The Ruby-crowned Kinglet (Regulus calendula) was still here this week, but I only saw single birds, not flocks like last week.  This tiny bird is only about 3/4 of an inch longer than a Ruby-throated Hummingbird and like the Hummer, can flutter in the air as it picks seeds off of the goldenrod.  We spotted this one because of its restless flitting and its call, which sounds a bit like a high-pitched version of the American Red Squirrel’s scold.  Click here and page down to “Calls” at this Cornell link.

A Ruby-crowned Kinglet who can feed while fluttering, in the style of a hummingbird.

White-throated Sparrows on their way south bounced and swayed among the goldenrod, looking for seed,  or rested, perching in short trees and shrubs nearby. The yellow dots in front of their eyes (their “lores”) make them easier to identify than some sparrows.  Cornell describes their call as a “high, level seep”; I’d say a small, soft cheep, but you can listen here under the second “call” and see what you’d name it.  This one seemed a bit annoyed at my camera! 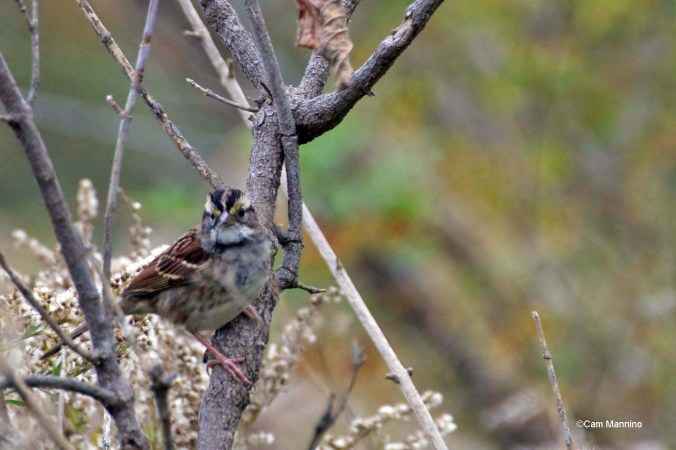 The White-throated Sparrows migrating through this week make a high “seep” sound as they forage.

A smaller group of young White-crowned Sparrows (Zonotrichia leucophrys)moved into and out of the tangles of brush along the paths.  These brownish youngsters, like the ones in last week’s post, were born south of the Arctic circle this summer.  When they return in the spring, their heads will be boldly striped black and white. They’ll have a lovely song then but right now they make a rather simple sparrow “chip” as they forage among the greenery.

A first winter White-crowned Sparrow pauses in the vines.

The cheek pattern on this brown and gray sparrow means it might be a Swamp Sparrow, but since it refused to emerge from its hiding place in the goldenrod, I can’t be quite sure! If it is, it’ll have longer legs so that it can actually put its head under water to capture aquatic insects. This one was clearly hiding so it didn’t make its metallic “chip” call. 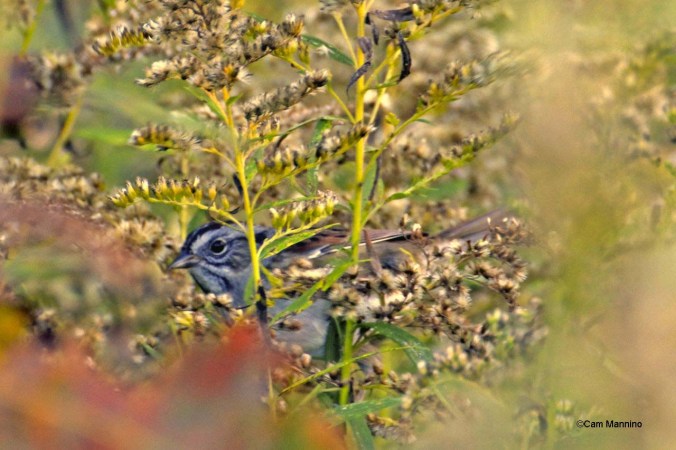 This may be a Swamp Sparrow from his cheek markings but it wouldn’t emerge from the goldenrod!

Young Cedar Waxwings still dash about the park until they depart later in the fall or winter. They can make quite a racket as they dip and swirl through the trees looking for fruit.  Check out the bzee trills and whistles of a whole flock at this Cornell link. Here you can see the yellow tips of a Waxwing’s tail feathers in flight and also when it is perched on a limb.

A Cedar Waxwing turning and twisting through tree branches and whistling at the same time! 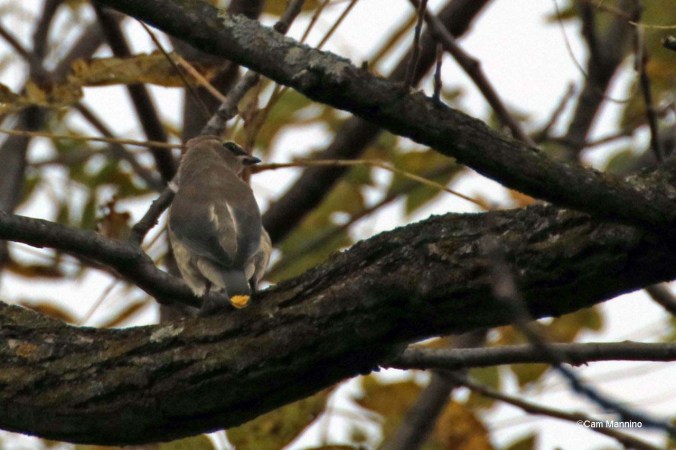 The yellow tips of a Cedar Waxwing’s tail feathers glow on a gray day.

Our summer Blue Jays (Cyanocitta cristata) are departing and ones from farther north are arriving here for the winter.  Jays are members of the very bright Corvidae bird family, like Crows.  Here’s a curious winter migrant exploring a standing dead tree (or “snag”) in Bear Creek.  You’ll hear lots of raucous Jay calls in the park right now, as they flock in from the North.  The familiar call is at this link at the third recording under “Calls.”

A curious Blue Jay checks out a hole in a “snag” or standing dead tree in Bear Creek.

Downy Woodpeckers (Picoides pubescens) make good use of “snags” for drumming when courting or making holes for nesting in the spring.  Now they make only a soft tapping sound as they search for insects and the occasional seed. Their quick vertical/upside-down/every-which-way acrobatic trunk hopping serves as a better clue to finding one. Downies travel in mixed flocks during the winter. According to the Cornell Lab, they get more warning of predators and find more food that way.  Females (no red head spot) evidently feed on larger branches or the trunks of trees because males (red spot on back of head) prevent them from feeding on smaller branches and weed stems which females seem to prefer when males are absent!  So here’s an “oppressed” female Downy on a large limb.

Female Downy Woodpeckers generally feed on tree trunks and large limbs because males prevent them from feeding on the smaller limbs and weed stems which females seem to  prefer.

American Goldfinches (Spinus tristis) sing in flight and they are everywhere in Bear Creek now.  Wikipedia describes their flight call as tsee-tsi-tsi-tsit  or per-chic-o-ree.  Maybe you’ll recognize the first recording under “Calls” at this Cornell link.

An adult male Goldfinch in winter plumage still sings when in flight.

A Noisy Chipping Competition with an Unimpressed Audience!

A willow in the marsh

The fall colors in the marsh are lovely and I have always loved this big willow that floats like a cloud above the reeds at the south end.   Male mallards flutter in the water in an effort to impress the females and find a mate for the spring.  Since many of them have not finished molting and still have brown feathers mixed with the iridescent green, the females aren’t paying much attention yet.

The female mallards don’t seem to be paying much attention to the male fluttering his wings, a display gesture for mallards.

In the woods at the edge of the marsh, though, I came across the auditory dueling of  Eastern Chipmunks (Tamias striatus).  They each “chipped” steadily for long minutes, presumably defending their cache of nuts and seeds from possible snitching by the other.  With winter approaching, it happens! So these chipmunks loudly defended their territories – presumably from me as well as other chipmunks.  I saw one of the noisy characters, its whole body throbbing as it “chipped” loudly from a fallen limb.

A chipmunk chips loudly to protect its territory and defend its winter cache of seeds and nuts.

I wasn’t able to find the answering chipmunk on the other side of the trail, but I did spot a listener nearby.

A silent chipmunk listens to two others chipping loudly to defend their territory and cache.

But evidently, the listening chipmunk found whatever was being communicated quite distasteful – or perhaps it was just having digestion problems!  But its expression changed and made me laugh out loud.

The listening chipmunk either didn’t like the chipping competition or was suffering from a bad case of indigestion!

Here’s a 30 second recording I made of the two dueling chipmunks warning each other – and me probably –  to respect their territory!

Seeds in the Wind!

Butterfly Milkweed pods broke open this week and their ripe seeds were carried away on the wind.

This week the slender pods of native Butterfly Milkweed (Ascelpias tuberosa) broke open and the wind took the ripe seeds dancing through the air.  Whenever we find milkweed seeds of any kind  on a mowed or limestone path, some place where it would be difficult for them to grow, my husband and I  pick them up and release them into the wind.  (We don’t break open seed pods!  The seeds aren’t mature until the pods open and the seeds start flying on their own.) We toss or blow them into the air because we want more of milkweed next year.  And besides,  watching the seeds sail across a meadow, competing to see which one goes farthest and highest,  is a good game!

So if you come to Bear Creek this week – or any week  –  perhaps you too can discover how your ears, as well as your eyes, can help you spot birds, especially small ones, that you’ve never noticed before. And if you see some milkweed seeds that have landed in unfortunate places, toss them skyward and watch them fly!

2 thoughts on “THIS WEEK AT BEAR CREEK: Birding by Ear, Dueling Chipmunks and Seeds in the Wind”