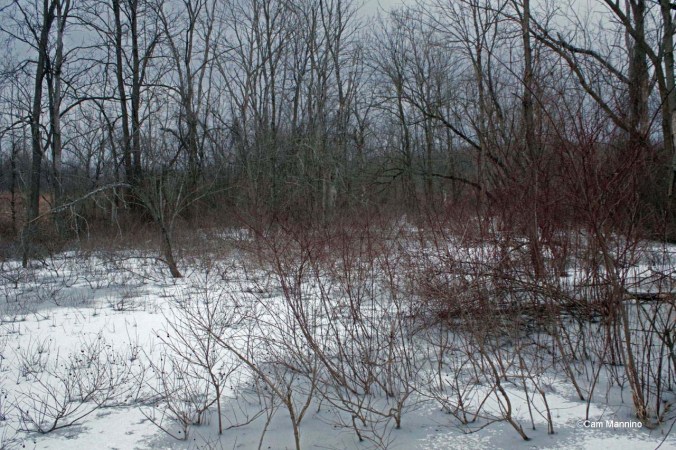 Wetland below the south hill

Our warm winter continues.  Early last week, spring-like warmth and sun melted the snow, turning the fields and woods brown again. Though the ice in  small ponds and pools softened, most of it remained.  So as I walked the central and northern parts of the park, wetlands shone among the trees.  The one in the photo above, just below the southern hill, is a maze of green in the summer, but in winter, its architecture appears – brushed with the soft red of Red Twig Dogwood (Cornus sericea),and punctuated by drooping balls of Button Bush (Cephalanthus occidentalis).

The warmth brought muskrats out into the sunlight and seemed to make the birds giddy.  I saw multiple flocks this week calling and moving restlessly in the bare trees.  It sounded as though some males were even practicing bits of their courting songs. Short fluting notes sounded here and there – not just calls, this week, but also little musical phrases.  A mud-luscious week for mid-winter.

So many birds this week!  They flew up out of bushes or bounced on bare limbs among the treetops.  This gorgeous male House Finch (Haemorhous mexicanus) rested in the  Box- Elders (Acer negundo) near his mate on the trail just north of the playground.  Box-elders are a disturbance-loving member of the Maple trees, providing some food and cover for winter birds in many of our old farm fields.

A male House Finch – a particularly beautiful one – joined his mate in the Box -Elder trees, which provide plentiful seeds.

I think I caught this female House Finch just as she bit down on a seed so it’s not her most flattering portrait!

A female House Finch caught crunching on a seed. I’m not sure she would appreciate this photo!

Male House Finches were making lots of noise in the Eastern Old Field and they seemed to be keeping company with a male Eastern Bluebird (Sialia sialis)!

Bluebirds appeared all over the southern part of  the park this week.  Here’s a quick shot of a male who repeatedly darted down to the ground apparently finding seeds in the dry grass of the Eastern Path.

A male Bluebird darts down to the ground to feed on the Eastern Path.

The lady Bluebirds were in evidence, too, of course.  Here’s a female unfortunately feeding on the irresistibly bright red berries of  Asian Bittersweet, an invasive vine that kills many of our trees and bushes.  The female Bluebird, as you can see, has more subdued coloring with a gray head.  But she’s a beauty, too. 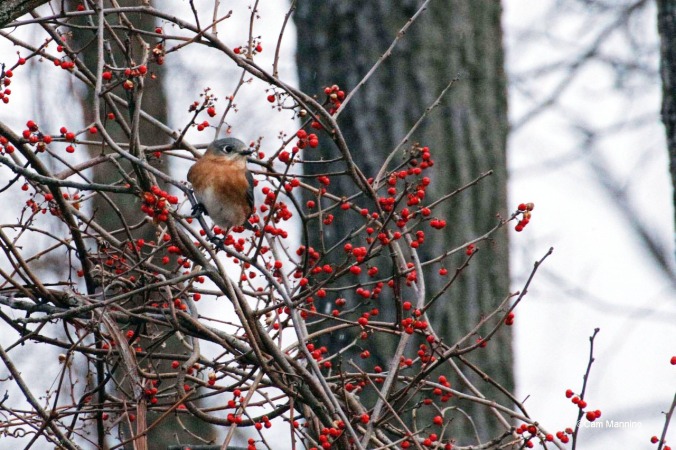 A female Bluebird with more subdued coloring sitting in the lethal vine, Asian Bittersweet, that kills trees and bushes.

On the far western side of the park this week, a flock of American Robins (Turdus migratorius) clucked to each other  while a few tried out some spring notes as well. They were feeding off Box-Elders just like the finches. 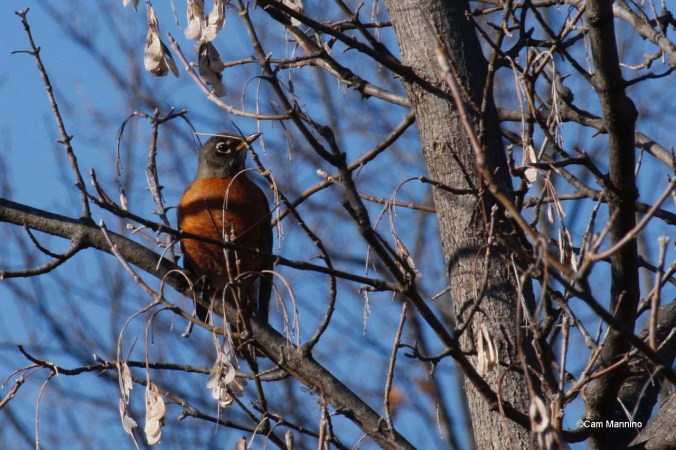 Since the head is a bit more gray than dark black, this may be a female Robin in the Box-Elder tree.

American Goldfinches (Spinus tristis) often give a contact call as they fly, a lovely sound on a winter morning  (listen to the second “Call” recording on this Cornell Lab link). Their small bodies, not as bright now as in the spring, pump up and down in flight as they beat their barred wings.  Those wings, the clear breast, a conical bill and forked tails  help identify Goldfinches when they’re dressed in drab winter garb – and half in shadow like this one! 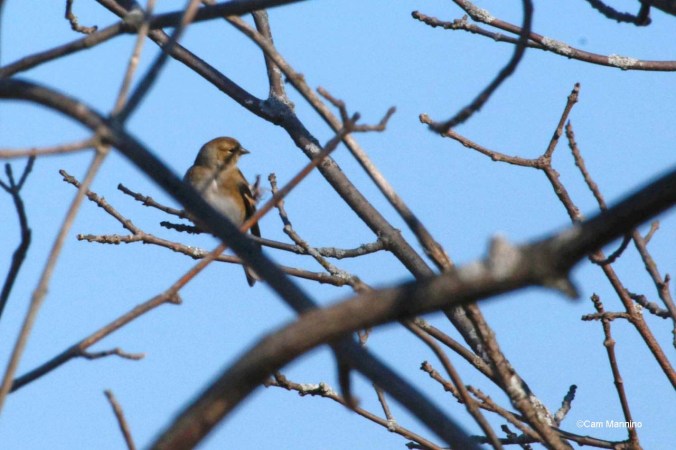 An American Goldfinch in its drab winter garb

If you hear a swoosh of wings and a high whistling sound, look for the Mourning Doves (Zenaida macroura). These birds with the gentle expressions can fly very fast, and their wings make that high whistle as they take off.  Their mournful cooing is often mistaken for the sound of an owl.  Mourning Doves are the most hunted species in North America but not currently in Michigan, according to the DNR.

Mourning Doves fly as Cornell lab says “fast and bullet straight.” Listen for the whistling of their wings as they take flight.

Since it’s winter, flocks of Dark-eyed Juncos, who spend summers in the far north,  are now feeding in the grass in groups as well. 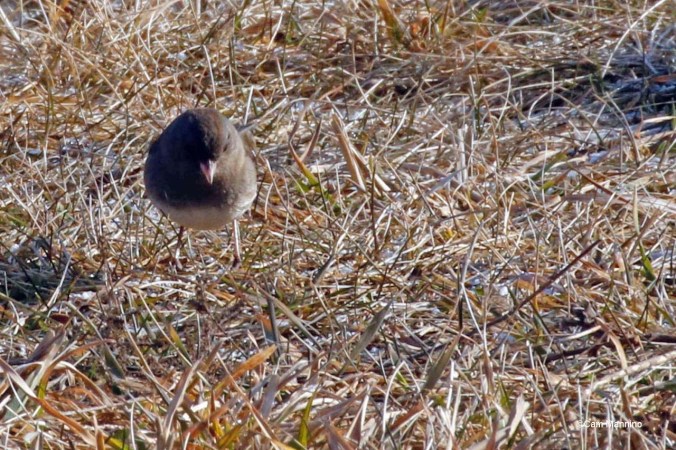 A Dark-eyed Junco searches for seeds in the grass of the Eastern Old Field.

Only the woodpeckers seemed to be singletons this week.  A quick, soft tapping alerted me to this male Downy Woodpecker (Picoides pubescens) drilling upside down on a branch. Oddly, he stayed in that position to preen for a few minutes as well, so there must have something quite tasty under that stretch of bark!

A male Downy Woodpecker finds something good on the underside of a branch.

Muskrats Above the Ice!

It must be such a treat for the Muskrats (Ondatra zibethicus) to be able to come up into the sunshine after weeks spent under the ice or inside their feeding platforms.  These mammals don’t hibernate in winter so feeding and getting oxygen is a challenge when trapped in the dark of the icy marsh.  Check out the blog from December 14 for more info on the muskrat’s quite amazing survival strategies.  One late afternoon this week, way off at the eastern edge of the marsh, the ice had melted. From the platform I saw 3 members of a muskrat family swimming and eating there.  My long lens didn’t quite reach them, but here is the largest of them, feeding.

A muskrat feeding in the cold winter sunshine where the ice had melted in the northern marsh.

Vernal Pools Appear After the Melt

Whenever snow melts, winter or spring,  or when rain falls,  water runs off into low-lying areas.  This creates a wetland with no fish, which is an ideal breeding ground for frogs, for example,  whose eggs would be eaten by fish and whose young grow quickly before the pools dry up in warm weather.  I’ve seen ducks mating in these more private pools as well. Normally in the winter, these pools disappear to the eye.  Either their white snow cover blends into  the white landscape around them or without snow, they blend into the dark floor of the forest.

But this week, when the snow suddenly melted in the woods, the partially melted ice left in these pools suddenly shown through the dimness.  Quite a pretty sight, really.

Here is a vernal pool near the west arm of the Big Northern Loop as it looked when dry in late summer and as it looked this week (Hover cursor over photos for captions). 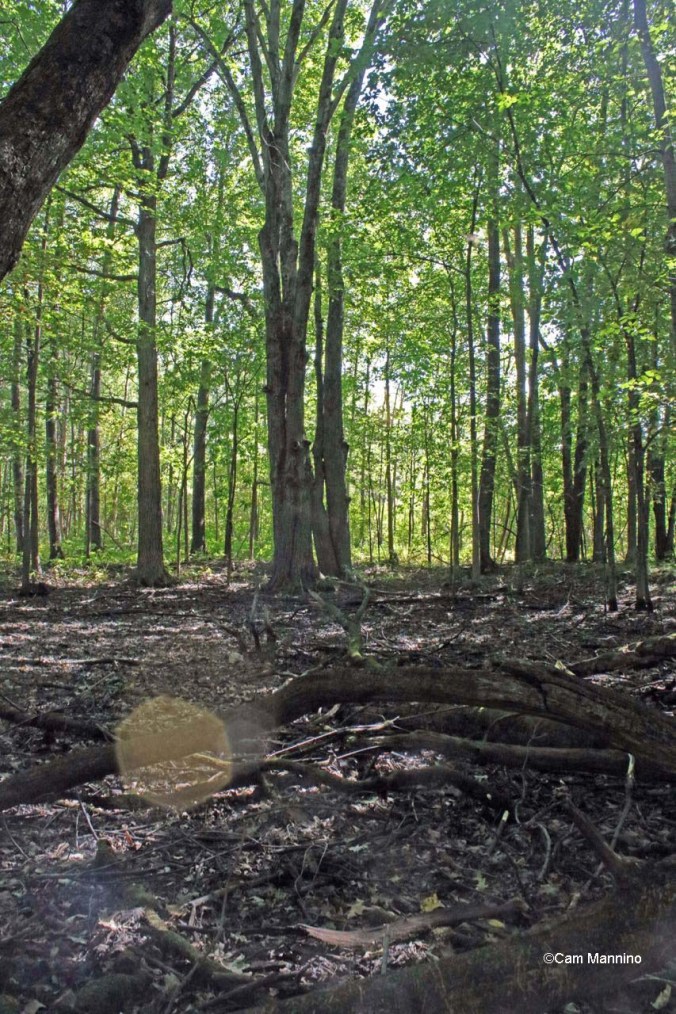 A dry vernal pool in the north section of the park late summer.

For me, vernal pools are kind of magical, appearing and disappearing, and yet so important to certain creatures like wood frogs, toads and salamanders, not to mention insects and plants.  Here is the vernal pool near Gunn Road dry in early fall and then filled with wood frogs as it was last spring.

I’m continually delighted by how much life and beauty greets me on any walk at Bear Creek – even in the winter! Consider donning your most mud-tolerant shoes/boots to discover at least a bit of it when you can.  You’ll come home with your cheeks pink, your lungs full of fresh air, your muscles worked and all kinds of new experiences to nourish your mind and imagination.   Never fails for me. 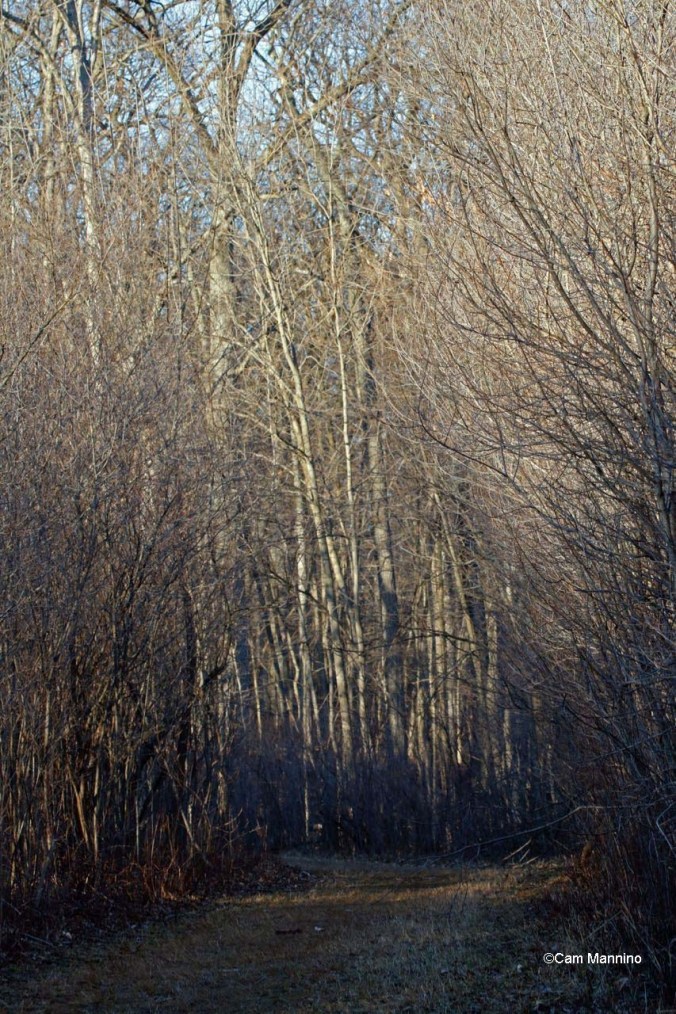 Eastern arm of the Big North Loop at sunset

6 thoughts on “THIS WEEK AT BEAR CREEK: Giddy Flocks, Muskrats Emerging and Pools Shining in the Woods”