Blog and photos by
Cam Mannino

At this time of year, talking about snakes, turtles, salamanders and frogs may seem a bit odd to you.  Actually though,  the Herpetology expert and presenter, David Mifsud of Herpetological Resource Management (HRM), told us that he sees Spring Peepers, Eastern Garter Snakes and Red-backed Salamanders moving around in Michigan winters when temperatures warm up as they have lately.    So for starters, here are three that he says we might look for during this winter thaw:

You could see a Red-backed Salamander (Plethodon cinereus) in a vernal pool created by snow melt.

Spring Peepers (Pseudacris crucifer) can occasionally be heard/seen on a warm winter day.

And even if you don’t see one of these herps “in person” this winter, it’s just pleasant to think about springtime creatures in the dead of winter, right?  So here’s a brief trip through some of the important and lively information that David shared with about 30 of us last Thursday night.

Note:  Because some of these creatures are rare, some of the photos this week are courtesy of photographers at iNaturalist.org.  Please check the captions for names of these gifted people and many thanks to Creative Commons, iNaturalist and these photographers for sharing their work!

How Important are Amphibians and Reptiles?  Let Me Count the Ways…

The nymph of dragonflies can live in vernal pools for years before hatching.

The dragonfly larvae feed on salamander eggs attached to sticks in vernal pools. 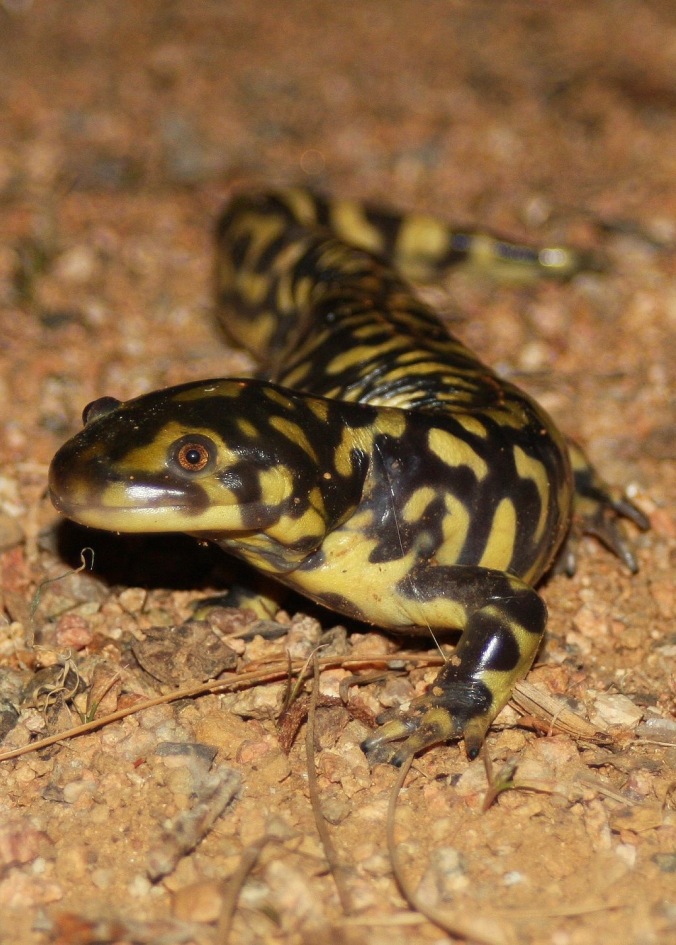 Photo of Tiger Salamander by J.N. Stuart CC BY NC-ND

And the Prognosis for Michigan Herps?  Uh, Not So Good…

Unfortunately, in Michigan and the Great Lakes Region, more than half of our species of amphibians and reptiles are declining. Why?

A Snapping Turtle leaves a strong marsh scent on her trail that lead predators, like raccoons, to her nest of eggs.

Raccoons are efficient predators of “herp” eggs and young. So please don’t transport yours to the parks or we’ll have too many! This one peeked from a tree at Bear Creek.

Of course,  birds and other creatures prey on amphibians and reptiles as well.  This Cooper’s Hawk (Accipiter cooperii) is heading for quite a feast!

A Cooper’s Hawk prepares to dine on a snake.

Photo of the tiny Spotted Turtle by Todd Pierson (CC BY-NC-SA) whose numbers have declined due to treating them as pets.

The Leopard Frog (Rana pipiens), which appears in our parks, is also a Species of Special Concern in Michigan due to its declining numbers. This lovely frog with its emerald body and oval spots has unfortunately been poorly studied. So researchers still need to find the reasons for its distress.

The Leopard Frog’s numbers are declining and no one yet knows exactly why.

OK, but what about that Michigan rattlesnake???

Photo by Andrew Hoffman CC BY-NA-ND 4.0. No changes were made to the photo.

Most of us have heard of, but never seen, Michigan’s most venomous snake, the Eastern Massasauga Rattlesnake (Sistrurus catenatus catenatus) (a couple other snakes have weak venom that only causes irritation). This very shy, low-key snake only grows to about 2 feet long. According to Michigan DNR, it has one set of rattles at birth and develops more as it sheds its skin several times each year.  Its head is triangular like most rattlesnakes, though it is the smallest and least venomous rattler in the U.S.  Look also for a vertical eye slit and saddle-shaped spots.

The likelihood of you being bothered by this snake is low.  In 2016 it was listed as a Federally Threatened Species, which means its numbers are becoming drastically low.  And these snakes just want to avoid you. David reports having searched for this snake with a tracking device and after hearing a loud “beep” from his device, found it under the grass between his feet!  As he moved the grass aside, the snake silently slid over his shoe and away. That’s a conflict-avoiding snake! And a herpetologist with nerves of steel, I might add.

So if you do get to see one, consider yourself lucky. Don’t hurt or handle these docile snakes, since folks most often get bitten when harassing a snake that just wants to get away. Many bites are “dry,” meaning no venom. It takes lots of energy for the snake to produce the venom, and it doesn’t want to waste it! But if you get any kind of bite from this snake, see a doctor right away. Luckily, Dave informed us that no one in the US has died from such a bite in 100 years.

In spring, when these snakes are most active, they’re seen near wetlands, but they are likely to move to drier, upland areas in the summer. While they been seen recently at Stony Creek Metro Park in our area, we have no recent sighting in our township parks. Let us know if you see one!

Massasaugas overwinter for up to six months under logs, in small animal burrows and often in the “chimneys” created by crayfish, like this one. 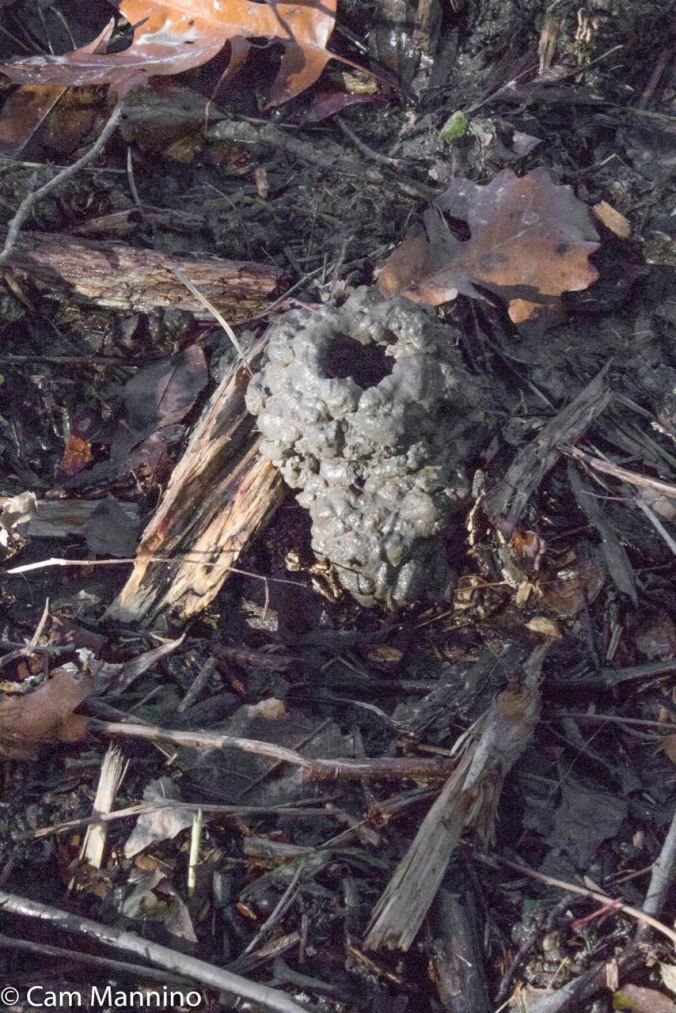 A recently refreshed crayfish hole can hold many creatures over the winter, occasionally including Massasauga rattlesnakes.

Evidently, these burrows fill with ground water which maintains a more constant temperature in the winter than above ground – and that’s what important to an animal that can’t control its body temperature internally.  What’s amazing is that they often share these chimneys with other small creatures during the winter when all of them are in hibernation mode.  A kind of winter “condo” as David described it.  Imagine that!

Befriending Our Local Amphibians and Reptiles

The “Von Trapp Family”  Painted Turtles line up on a log at Bear Creek Nature Park.

Our parks are great places to see all kinds of “herps.”  Snappers and painted turtles cruise Bear Creek’s ponds and marshes.  Our wetlands in every park fill with a chorus of frog song every spring.  Snakes bask in sunny spots and quickly disappear into tall grass.  And in moist woodland uplands, salamanders emerge on the first warm night to make their way to vernal pools to mate and lay their eggs.  We need to care for these interesting creatures and their habitats  to be sure that they still thrive in our world when our children or grandchildren go looking for them.