Charles Ilsley Park sways with grass and colorful wildflowers right now as restoration begins returning the rolling fields to the prairies they once were. The eastern prairie, featured this week, is breath-taking!   Butterflies dance in and out of native Black-eyed Susans, bees hum, grasshoppers leap at your feet and dragonflies swoop above the Yarrow and Bee Balm. Birds perch and forage at the trail edges and sing from the woods.

These former farm fields, once full of invasive and non-native agricultural plants, are gradually being restored to provide for the birds, insects and other wildlife that historically nested and foraged here. A new path through the thirteen acres of the eastern prairie now provides a perfect quiet stroll on a sunny morning or afternoon.

Birds are Plentiful, Colorful and Sometimes Difficult to See

At this time of year, adult birds are busy feeding and over-seeing either nestlings or fledglings. So they’re deep in the leaves, high in the sky, or down in the grass, foraging for whatever will feed the young. Here’s a graceful female Baltimore Oriole (Icterus galbula) with seeds in her beak approaching her nearby nest hidden in a clump of leaves that hangs right over the trail as you enter the park.

Earlier in the summer, the bird boxes along the trail into the park were busy places! A House Wren (Troglodytes aedon) took over a rather dilapidated one.  You’ll notice in one of these pictures, the wren is pecking at a spider web. Cornell Lab says that wrens often put spider egg sacs into their nest box so the spiders will rid it of mites! (Click on arrow for slide show; use pause button for captions.)

The Tree Swallow (Tachycineta bicolor) spread its huge wings as it swooped in and out feeding its mate or young in June. Now the box seems to be just a stop-over spot as it soars and dives in the meadow beyond. 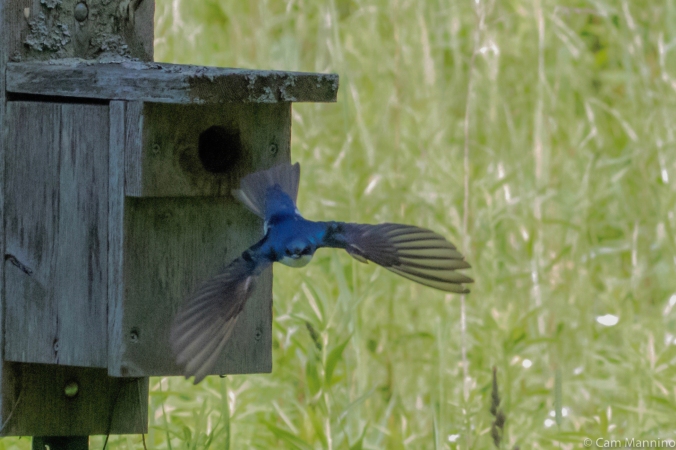 Look at the size of those wings! 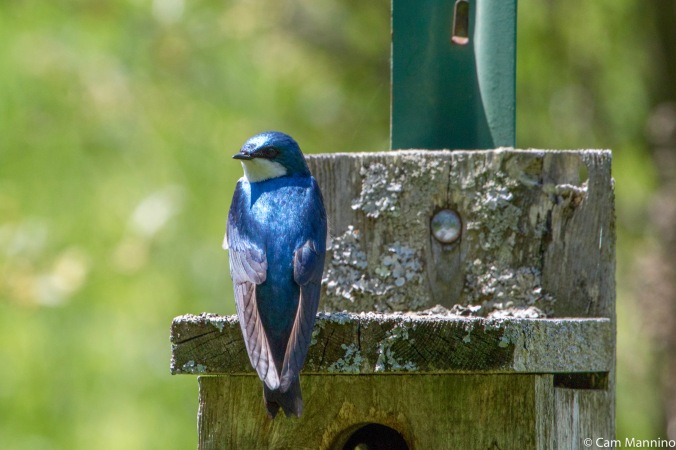 And look at those wings folded!

Thanks to Laurie Peklo, a member of the birding group who cleaned out the nesting boxes this spring, the Eastern Bluebirds (Sialia sialis) also found a home at Ilsley again this year.

A few weeks later, we saw a Bluebird fledgling in a tree, perhaps the male’s offspring. Baby bluebirds take a while to turn really blue, so I’ve also included a photo of a bit older one begging in our front yard. (Click on photos to enlarge; use back arrow to return to blog.)

A fledgling Bluebird at Ilsley 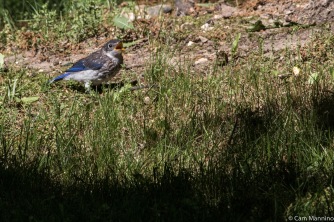 When you reach the sign about Prairie Restoration, you’ll see that the center of the park is brown and mowed. Don’t worry.  Ben VanderWeide, township stewardship manager, and his crew are just preparing the ground so that in the fall, it can be sown with native prairie plants – just as the eastern prairie was planted two years ago, and the north and west were planted last year. In a few years, we’ll have close to 50 acres of prairie in this park!

On every recent visit, a male Common Yellowthroat (Geothlypis trichas) has sung from the bushes on the hill in the center field. That’s why Ben left the greenery there when the field was prepared for prairie planting – to protect their young. The photo below, was taken in the spring when one male came a bit closer and really belted out his “witchedy, witchedy” song!

The “witchedy” song of the Common Yellowthroat can still be heard at Ilsley, but in spring he really threw back his head and SANG!

A Field Sparrow (Spizella pusilla) foraged in the grass of the trail on one of our birding walks. Its pink-ish beak matches its pink legs – an easy field mark for these little birds. Ben describes their rolling song as a bouncing ball. 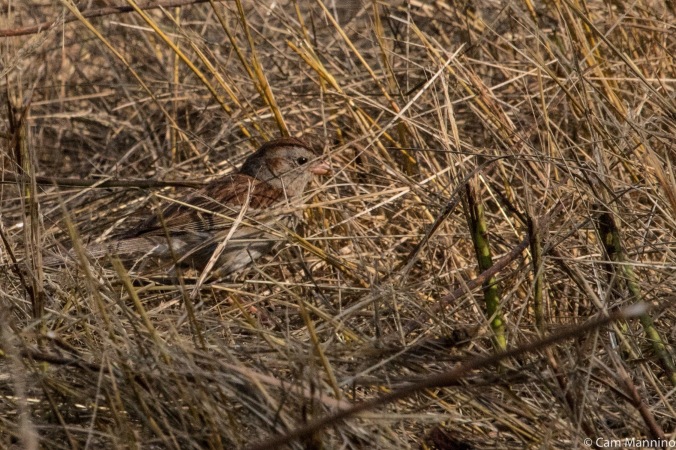 A Field Sparrow foraging at the edge of the trail

Young Chipping Sparrows (Spizella passerina) and their elders forage there as well. Thanks to birder extraordinaire, Ruth Glass,  for the identification! (Click on photos to enlarge.) 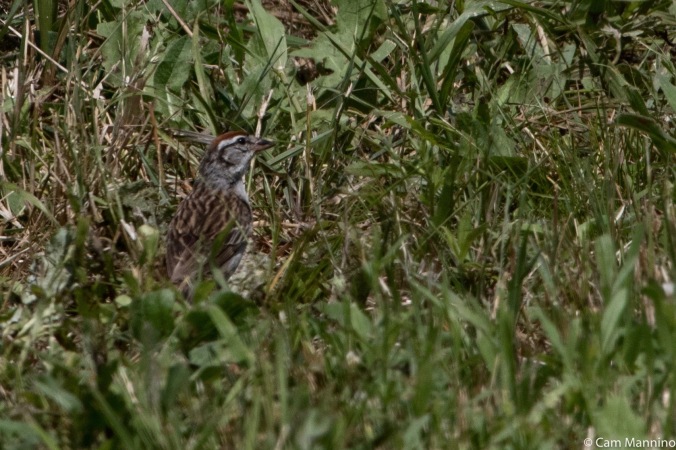 An adult foraging nearby 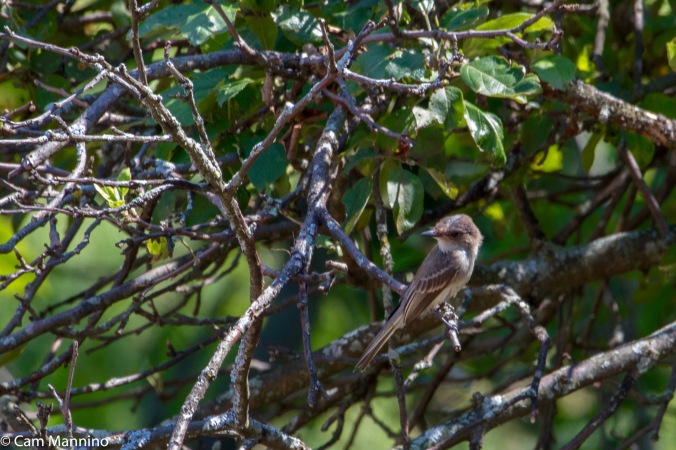 A rather scruffy-looking, juvenile Wood-Pewee

We birders heard an adult one singing in the woods near the eastern prairie last week, but didn’t see it – as is often the case with singing Pewees.   Luckily, one landed near our deck at home a few weeks ago, singing its name on a rising note  – Pee-weeee! Nice to see one up close and personal!

In a clump of trees on the south side of the east prairie, an Indigo Bunting (Passerina cyanea) sang from a very tall snag on my last three trips to Ilsley. He must have a nest nearby. He’s so far up, singing his song in phrases of twos and threes, that it’s hard to even see he’s blue!

But my husband and I were lucky enough to have one fly down to a small tree near us while walking at Addison Oaks about ten days ago. Such a glorious bird!

An Indigo Bunting – one of the rare moments when I’ve seen one up close!

As some of the birders exited the eastern prairie last Wednesday, they saw a very unusual bird, a Yellow-throated Vireo (Vireo flavifrons). I didn’t get a look before it flew – so here’s a lovely photo from a generous Creative Commons photographer at inaturalist.org, Donna Pomeroy.

An unusual sighting at Ilsley – a Yellow-throated Vireo. This photo is by Donna Pomeroy (CC-BY-NC) at inaturalist.org

Prairie Wildflowers – What a Sight! 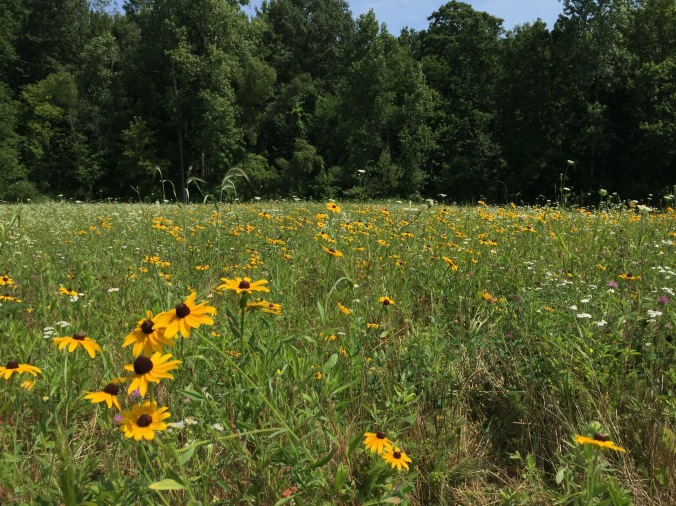 In 2015, the eastern prairie was sown with native seed acquired through a grant from the U.S. Fish and Wildlife Service. It will take three or four summers of careful stewardship for these native, drought-resistant prairie plants to grow deep roots and reach full bloom. Although this is only their second summer, the native wildflowers are already carpeting the prairie with color.

Ben mowed the field once this year already and will mow once more in August.  This relatively high mowing reduces the seed production of annual and biennial plants (like burdock, thistle and Queen Anne’s Lace) and allows sunlight to reach the prairie plants while they are small and growing roots. Look  at just of few of the native wildflowers already coming up!

And we still have autumn flowers to look forward to!

That Carpet of Prairie Wildflowers Brought All Kinds of Butterflies!

What a glorious sight! All over Ilsley’s eastern prairie, butterflies float and flutter in and out of the colorful tapestry of native plants – sipping the nectar and enjoying the sunlight. The birders sighted a relatively uncommon black butterfly called the Spicebush Swallowtail (Papilio troilus), though it took a lot of talk and research to identify it correctly! Luckily, the next day I saw the very similar Black Swallowtail (Papilio polyxenes) and was able to study the photos to spot the distinctions between the two. Here’s a swallowtail identification link I found very useful.  (Note that on this site,  the butterflies’ names are above rather than below the photos, which can be confusing at first.)

This is the male Spicebush Swallowtail. Notice that he only has white dots along the edge of his forewing, a faint line of pale blue dots above and a wash of blue (or blue scaling) on each hindwing.

A male Spicebush Swallowtail, a fairly rare butterfly to see in our area though they do frequent southern Michigan

The Black Swallowtail has a larger second (or postmedian) row of  yellowish spots above the row at the edge of its forewings and its more intense blue is contained in spots, rather than a wash of blue. It has a complete orange dot on each hindwing. This is the female, I believe, since her orange dots have a black center and the male’s are solid orange. Whew! Glad I had photos to help me![Correction:  I now (2020) believe this is a male Black Swallowtail.  Males have two rows of yellow spots.  Females have one row of white spots.  Both have an “iris” in the center of the orange spots.

The male Black Swallowtail, also at Ilsley, looks very similar to the male Spicebush but the Black male has two rows of yellow spots and the “iris” in the middle of the two orange spots..

My husband and I saw a third swallowtail flying high into the trees at Ilsley – the Eastern Tiger Swallowtail (Papilio glaucus). Here’s a photo from Bear Creek several years ago, just to remind you of its beauty, too. The female of this species can also be black!  But that’s for another blog… 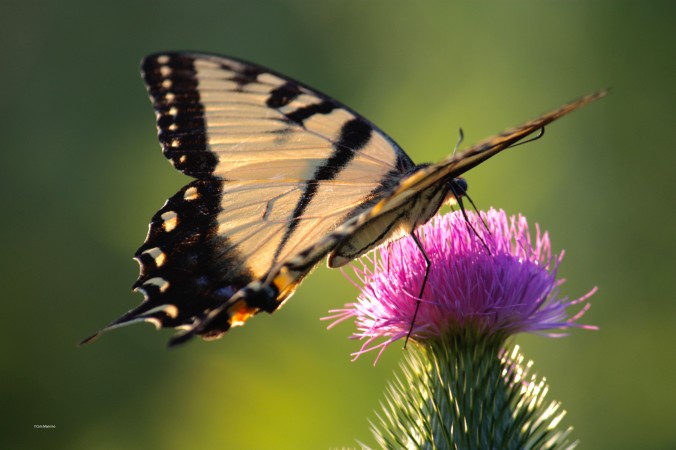 One hot morning, four different Monarch butterflies (Danaus plexippus) drank from blossoms on the Eastern Prairie. They didn’t leave their wings open for long when they settled; they only used them to move from bloom to bloom. Perhaps closed wings kept them cooler, since less sunlight would fall on their closed wings than on open ones. I’ve learned that dragonflies tip their bodies vertically to stay cool on really hot days for that reason. 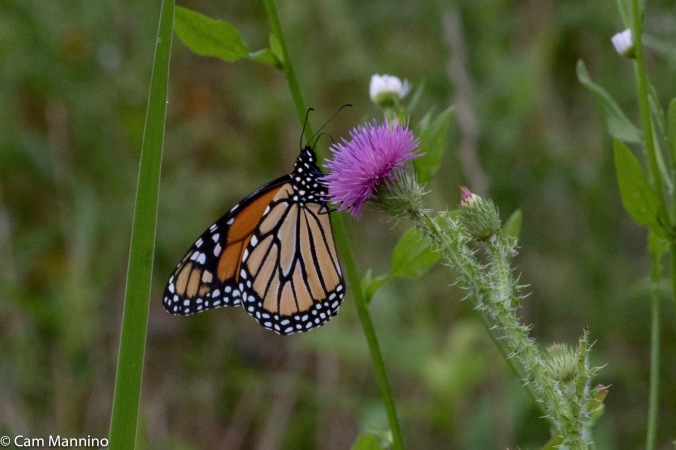 A Monarch on a thistle.

A Monarch with wings open just before flight.

Some of the birders spotted a Red Admiral (Vanessa atalanta) one Wednesday morning when I was off looking at the Spicebush Swallowtail.  So here’s an older Bear Creek photo of one of those also.

Look for Red Admirals at Ilsley too!

On my last trip to the park, I saw a finger-nail-sized, triangular-shaped, white butterfly that I could not identify (help anyone?) and a tiny orange one that I believe is a Delaware Skipper (Anatrytone logan). To assess their size, consider that the little white one is under a Daisy Fleabane and the orange one is on a blade of grass! Interesting things come in small packages, eh?

A finger-nail sized white butterfly I could not ID.

A Delaware Skipper, I believe

A Spray of Tiny Grasshopper Nymphs,  a Nice Big Carolina Locust, and a Widow Skimmer Dragonfly as well

On the path that crosses the center of the Eastern Prairie, you’ll see – and hear! – hundreds of tiny grasshopper nymphs jumping off the path. They sound like rain falling on the taller grass stalks! Only about an half inch long now, they’re hard to identify. My guess is they’re Red-legged Grasshoppers (Melanoplus femurrubrum). The larger one in the slideshow below is definitely a Red-legged but it’s still a nymph, too. These guys molt 5-7 times before reaching adulthood. The brown Carolina Locust (Dissosteira carolina) is much bigger, about 2 inches.

Of course no prairie is complete without dragonflies! Female, or possibly juvenile male, Widow Skimmers (Libellula luctuosa), with yellow abdominal stripes, hunted above the greenery last week. Adult males eventually develop a white wing band next to the dark one and their brown abdomens take on a bluish-white sheen as they mature.

We all love local history, so it makes such perfect sense to restore our natural areas, too. At Charles Ilsley Park, we have an opportunity to see what our township looked like before European settlement, when Native American tribes lived on the rolling oak savannahs covered with tall grasses, wildflowers and widely spaced oaks. Even more importantly, natural areas restoration re-creates at least some of the rich diversity of plants, insects, birds and other wildlife that historically shared our green corner of the world. We’re on our way now to something very special here in Oakland Township.  Come have a look!

3 thoughts on “Charles Ilsley Park: Our First Restored Prairie in Bloom! And Oh, the Butterflies and Birds!”