On a cold April morning, a monumental figure appeared on the roof ridge of an empty house we can see through our woods.

We’d noticed a pair of vultures over the field next door, circling together, diving and turning, sculpting patterns in the cold morning air. Then a few minutes later, a monumental shape appeared on the roof ridge of an empty house through the woods. A Turkey Vulture (Cathartes aura) had landed and spread its powerful 5-6 foot wingspan.   But where was the other bird? Ah, peering through the trees, I spied a somewhat smaller vulture perched on top of the chimney, keeping its partner company.

Of course, I ran off to consult the Cornell Ornithology Lab website and found this: “Often, especially in the morning, they can be seen standing erect, wings spread in the sun, presumably to warm up, cool off, or dry off.”

Wikipedia added to that list the possibility of  “baking off bacteria” which would have made more sense on a warm summer morning.  I suspected they might be a mating pair, though the breeding season can run a bit later in their northern ranges.

Since turkey vultures form long term bonds after a group courting ritual, perhaps I was seeing an established  couple – or possibly an older bird with a younger one, since the smaller bird seemed to have more of the immature’s gray around its eyes than the typical fully red head of an adult. I wasn’t sure.

Eventually, the larger bird joined its partner on the flat surface of the chimney cap. Vultures evidently like to perch on abandoned buildings or any surface which is slightly cooler than its surroundings.

They stood together for a short time. The smaller bird lowered its head, perhaps recognizing an elder bird or signaling a willingness for a partnership.

They then spent a long time preening, which could have been a precursor to mating, but most likely is also important for any bird that eats carrion. 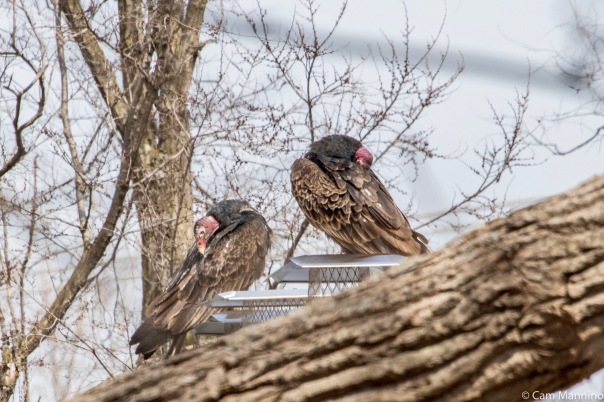 Turkey vultures, unlike Black Vultures (Coragyps atratus), rarely, if ever, kill anything. Instead they cruise using their excellent eyesight and keen sense of smell to spot a freshly dead animal. Their bare heads and sturdy digestive systems make them virtually invulnerable to contracting  anthrax, botulism or other diseases in decomposing meat. Vultures and other carrion eaters function in our habitat as a constantly vigilant clean up crew. For all my park visits, I rarely see or smell the remains of a dead animal – which I appreciate.

Predators don’t mess much with adult vultures. But when owls, hawks, or eagles do occasionally attack them, they aren’t agile enough to be good fighters. Their defense is to hiss or just vomit nasty, acid stomach contents on their attackers – and baby vultures do the same when attacked by raccoons or possums. I bet no predator tries that twice!

Vultures are admittedly homely, awkward birds on the ground. They hop and waddle with their wings akimbo and struggle to take flight. But once lift off occurs, they are masters of the sky!

They rise swiftly,  riding warm air thermals, circling high into the sky in a teetering, V-shaped flight. Rarely flapping those huge wings, they soar gracefully across and above the landscape. Light shines through the tapered tips of their primary (flight) feathers, creating what appears to be a wide silver-gray band edging their dark wings. I see them that way on almost every hike.

So I felt very lucky to have been gifted – on my birthday no less! – with a glimpse of these impressive birds in a more restful, and even intimate moment. No mating occurred, though. Before long, they both flexed those dark wings, took a few beats, and sailed back into the sky.

4 thoughts on “Photos of the Week: A Birthday Gift of Vultures”