Spring is an incredibly busy time for our stewardship manager, Dr. Ben VanderWeide. So many projects demand attention at once – and they all depend on so many variables! Planting native seed has to happen while the ground is still cold and wet. Prescribed burns, however, have to happen when the wind is low and from the right direction, and the plants are dry.

Photos and text
by Cam Mannino

Meanwhile volunteer training and supervision is going on for vernal pool monitoring, nesting box monitoring and  burn crews. Whew! Here’s a sample of what went on in late March and April at just one location – Bear Creek Nature Park.

In late March, Dr. Ben and Stewardship Specialist Alyssa Radzwion began a project to spread the seeds of native grasses and wildflowers in the areas cleared by forestry mowing last fall. The hope is that these native plants can help prevent some renewed growth of the invasive shrubs that were removed. It’s a project that will take years of persistent work, but they made a good beginning. 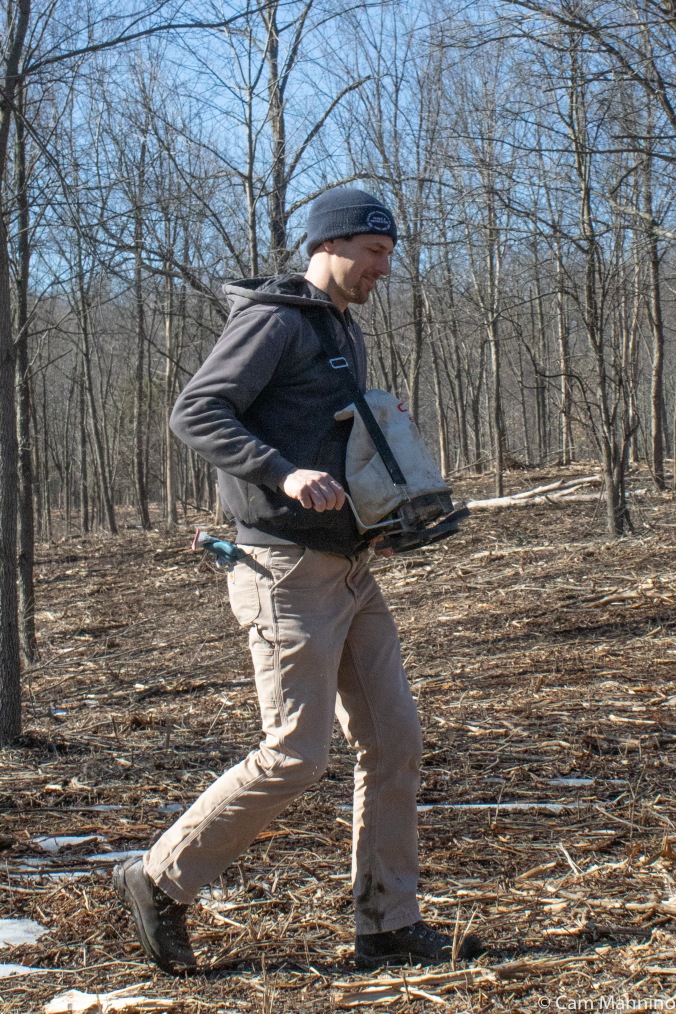 Monitoring the Life in Vernal Pools

In mid- April, the stewardship staff, a stewardship tech from the Six Rivers Land Conservancy (see Ian below) and a group of volunteers, including Parks Commissioner Dan Simon and his wife  pulled on tall boots and waders and ventured into the vernal pools in Bear Creek’s forest. The purpose is to monitor the health of these temporary pools, which are biodiversity hotspots in our forests. 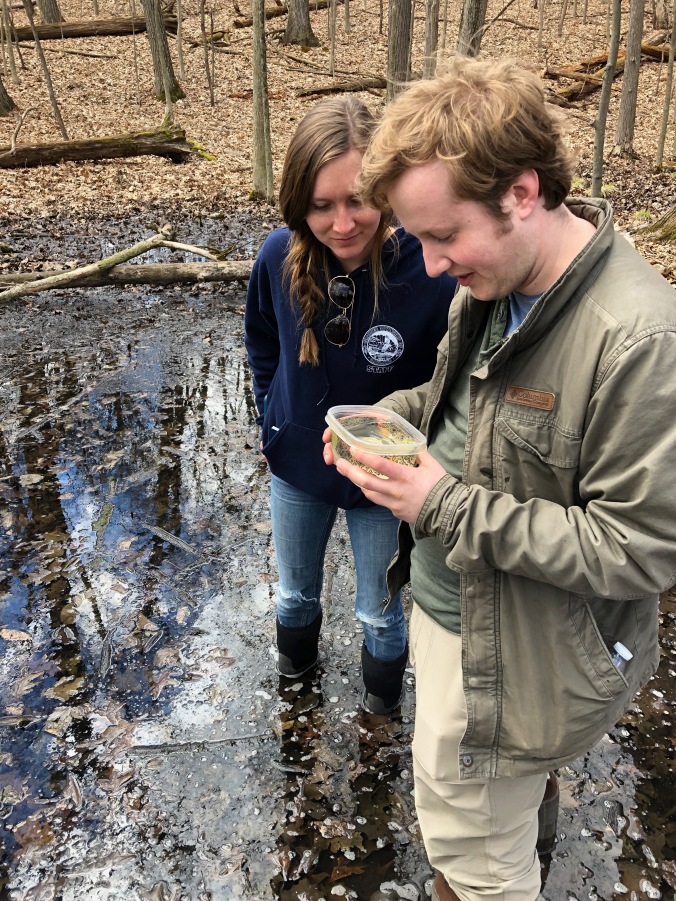 As usual, the crew found a surprising variety of creatures. Spring frogs, salamanders and many insects choose vernal pools as a good place to mate and lay eggs because they are free of hungry fish. The pools dry up and disappear in warmer weather, preventing fish from establishing if they are introduced.

For the second year, Dr. Ben has organized and trained a group of volunteers to monitor nest boxes from first nesting to the flight of fledglings. We “citizen scientists” report our data to Cornell Ornithology Lab’s “NestWatch” program. This year Ben added six boxes in Bear Creek Nature Park to the ones in Draper Twin Lake Park, Charles Ilsley Park, and along the Paint Creek Trail.  And I’ll be the Bear Creek monitor this year, which will be great! I’m hoping to count Eastern Bluebirds and Tree Swallows, and possibly Black-capped Chickadees or House Wrens where the nest boxes are closer to trees and shrubs. We might have Brown-headed Cowbirds to count too if those characters lay their eggs in any of the other birds’ nests!

The boxes were only up a day or so when Tree Swallows (Tachycineta bicolor) and Eastern Bluebirds (Sialia sialis) began to explore the boxes. I’m betting they are impressed with the real estate – new construction, a southeast exposure and a security system (metal predator guards to keep out raccoons, snakes, etc.). Between raindrops last Thursday,  I watched a pair of  Tree Swallows courting on one of the new boxes. They were doing their wet gurgling call to each other the whole time and touching beak-to-beak, while the male performed fancy wing displays. The male had just chased off a competitor, so he seemed excited!  It looks like an argument in the photo below, doesn’t it?  But I think it was just a lively prelude to mating.

What looks like an argument is just a lively display of courting behavior, I think.

I also found two completed Bluebird nests made of dry grasses in the new Bear Creek nest boxes, but didn’t get to see the female doing the building.  However, here’s a little Bluebird female I saw at Charles Ilsley Park  the week before bringing nesting material to her box. 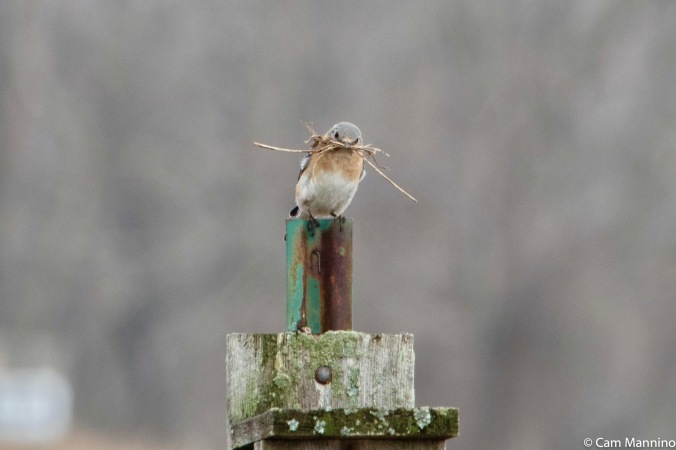 A female Bluebird bringing nesting material to her box at Ilsley Park.

Much to my delight, four days later at Bear Creek Nature Park, I found the first egg in one of our new boxes – a Bluebird egg.  They lay one egg each day for 3-5 days and won’t start incubating them until all the eggs are laid. The eggs then generally hatch on the same day, making feeding the nestlings more efficient for the adult birds.  Remember, please, that only trained and certified volunteers are allowed to monitor the bluebird boxes so as not to cause too much disturbance at the nest!

First bluebird egg in the new boxes at Bear Creek.

The township uses prescribed burns to periodically refresh our fire-adapted native plants, which benefit from periodic fires. Some of these burns are complicated and require hiring professional burn crews. But many are conducted by a group of volunteers trained and supervised by Dr. Ben. In late April, previous volunteer crew members and some new volunteers practiced their skills with two small burns at Bear Creek Nature Park in the native gardens near the parking lot. Volunteers are an important part of the stewardship program and the teamwork is an great way to meet local people who care about the natural world. Consider joining us! 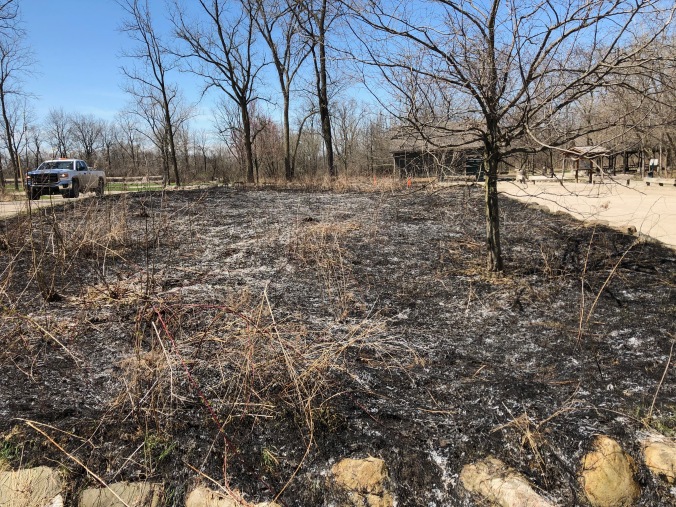 And a Celebratory Dance to End a Busy Month

Toward the very end of April, Dr. Ben arranged our annual Earth Day/Spring celebration: The Woodcock Dance Watch – and wow! This year’s dance was spectacular! This odd bird, with big eyes toward the back of its head, a stout body and a huge beak, does its unique aerial mating dance at dusk. After a short review of information about the American Woodcock (Scolopax minor), we toasted marshmallows while waiting for the sun to set. (Thanks to iNaturalist photographer Ty Smith for sharing his photo.) 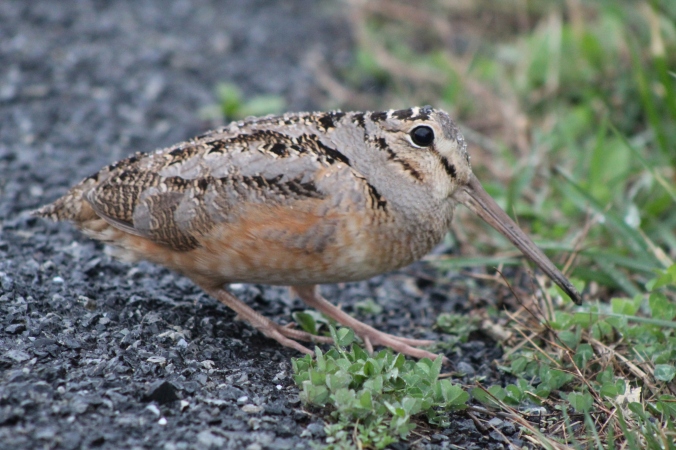 This year, one of our birding group members had been making almost nightly visits to Bear Creek Nature Park to watch one particular Woodcock who faithfully danced on the path near a certain puddle. So, as the sky darkened, ten of us gathered on the slope designated by our birder friend, Vinnie, and waited. 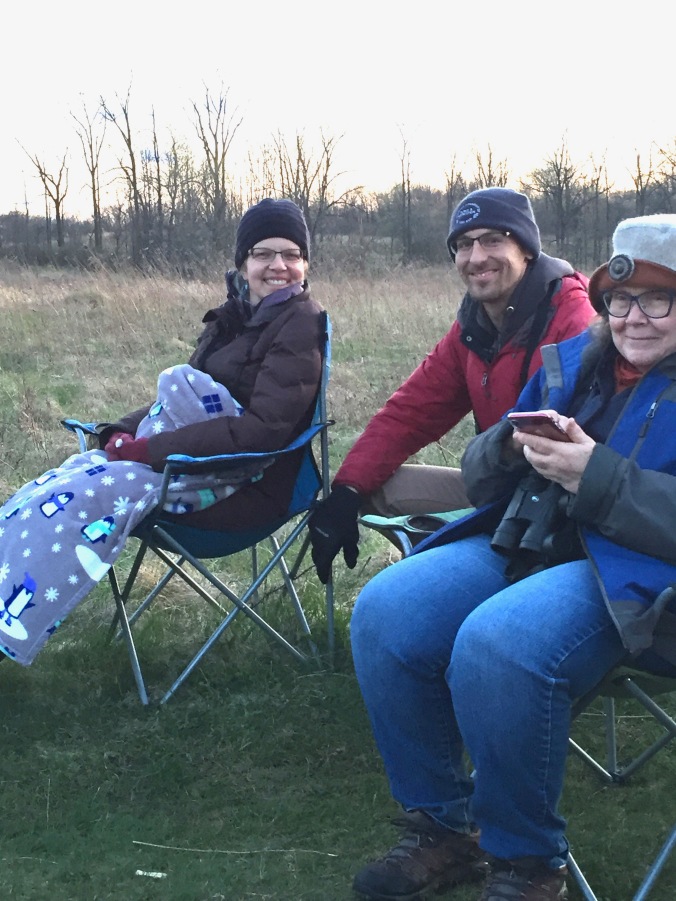 Dr. Ben with his wife, Debbie and birder Sigrid Grace

Suddenly, very close to us, the Woodcock landed on the path and started his dance. He began with a very odd bug-like buzz called a “peent” call while turning in circles, as he attempted to attract any available female. Then he took to the air with whirring wings, flying in lazy circles high in the air while burbling a different call. Finally he plopped back down right where he started. Without pause he started the “peenting” again, and the dance continued. It was an exciting performance! We all came away feeling it had been an evening well spent celebrating the spring rituals of the natural world.

A Busy Month for Nature and its Stewards

Ah, Spring! Little creatures slip into and out of ponds to begin mating. Seeds await the moisture and warmth they need to thrust new stems into the sunlight. Birds are busy migrating north, establishing territory, finding mates, building nests – even dancing!   And we humans are busy studying, recording and preparing  their habitat for another glorious summer!

One thought on “PHOTOS OF THE WEEK: Spring is a Super Busy Time for Stewardship!”