J.R.R. Tolkien provided the ideal words  to describe the in-between season in which we’re suspended right now: “… a morning of pale Spring still clinging to Winter’s chill.” Spring is officially here with the Spring Equinox, but mornings in the prairies and forests of the township can still feel as though we’re caught in the last weak grip of winter.

Text and photos
by Cam Mannino

So this week, I thought I’d be on the lookout for sure signs of spring’s arrival and naturally, once I started looking, they were everywhere!

Birds Herald Longer Days with Song and Some Fancy Posturing

Arriving at Draper Twin Lake Park one cold, gray Sunday, my husband and I heard a very loud, clear rendition of the entire spring song of a Northern Cardinal (Cardinalis cardinalis). (Cardinals have a lot of calls. Listen to the second call listed at this Cornell link – that’s the one we heard.) This fellow seemed confident that he could woo the ladies and establish his territory at the same time with his full-throated singing! Look at that beak! 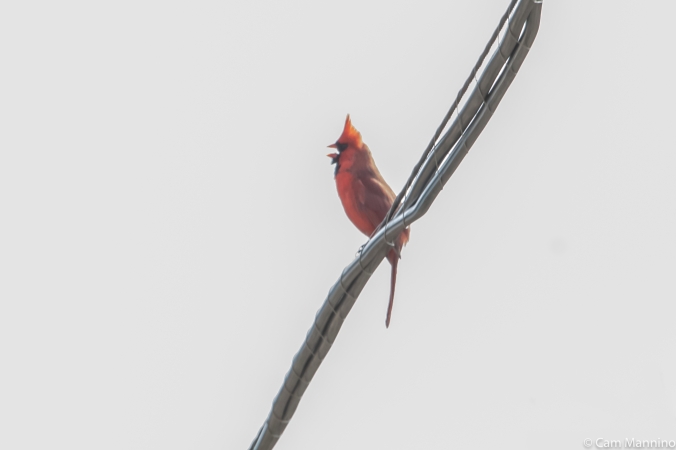 A Northern Cardinal shouts out his spring song!

Male  American Goldfinches (Spinus tristis) at our feeder are changing out of their modest winter attire into their breeding feathers. In a month or so, they’ll be bright yellow in the hope of interesting a female with an eye for color. Here’s a male on the bottom right perch of our thistle feeder who started changing his wardrobe in March. Perhaps the female on the bottom left perch will be interested? (The other birds are Pine Siskins (Spinus pinus) who will migrate north before long.) 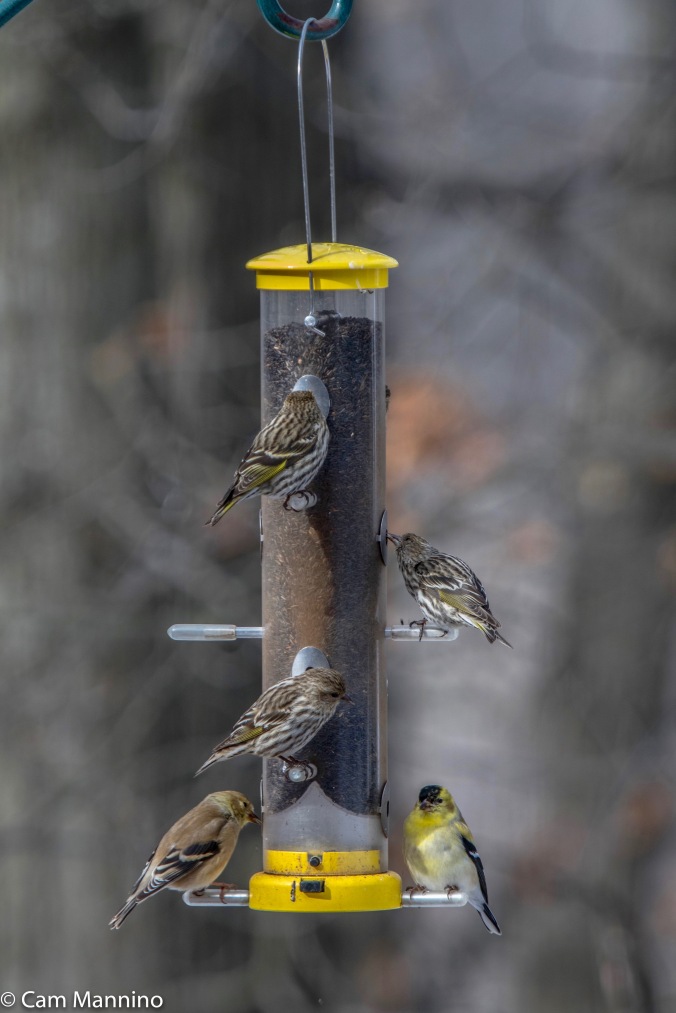 The male Goldfinch on the bottom right perch is signaling spring by changing into his bright yellow breeding feathers.

The buzzing trill of the Red-winged Blackbird (Agelaius phoeniceus), which is accompanied by raising his red shoulder patches, is a common and beloved sign of spring here in Michigan. But last week I saw a male who was taking display to a whole new level. While calling, he also began awkwardly dancing along a branch, keeping his scarlet “epaulets” raised, occasionally fanning his tail, all in the interest of establishing a territory and showing off for some lucky female. What a guy! (Click through the slide show below to see the progression of his dance!)

Other birds establish dominance over other males with creative use of their necks! Below two newly arrived Common Grackles (Quiscalus quiscula) appear to be  trying to “out-snoot” each other with their beaks tilted skyward!  I think the one on the right is probably the winner here, don’t you? Or else the one the left is an uninterested female. It’s hard to tell. 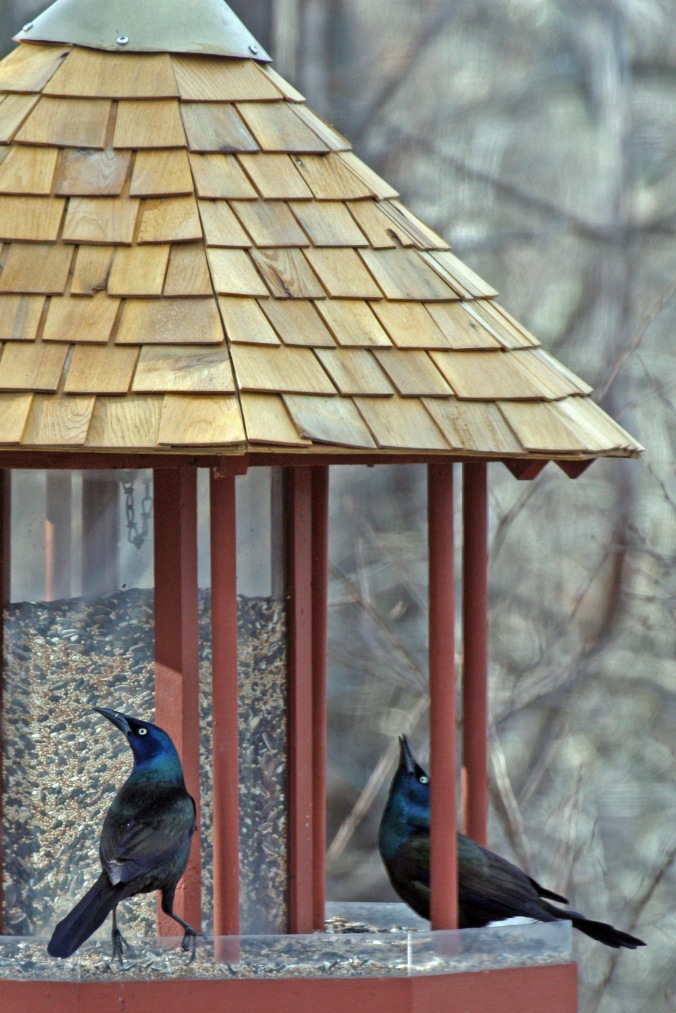 Grackles use head tilting to establish dominance over other males.

Mark, a birding friend, told me that the Common Goldeneye (Bucephala clangula) at Stoney Creek Metropark were doing their dramatic neck displays as well. According to Cornell Lab’s All About Birds website, Goldeneyes spend December to April in courtship groups where they form mating pairs by performing  a lot of energetic neck movements. The male bends his neck backwards until his head lays on his back and then he snaps it forward, splashing water with his feet at the same time! The female responds by lowering her head and swinging it forward. Pretty dramatic courtship! I wasn’t able to get to the Metropark this week, but a kindly photographer from iNaturalist, who goes by Mike B, allowed us the use of this photo of a male taken near Chicago. These diving ducks are headed to their breeding grounds in northern Canada and Alaska, just south of the Arctic.

A male Goldeneye doing a courtship display before heading farther north.Photo by Mike B (CC BY-SA) at iNaturalist.org

The birding group had an exciting Wednesday at Charles Ilsley Park when two huge flocks of Tundra Swans (Cygnus columbianus) flew overhead! Cornell says that these huge, all white swans with black beaks spent the winter on the Atlantic coast and are now headed to the Arctic tundra to build their nests and breed. Aren’t we lucky to be on their flyway?

Another birding friend, Mike Kent, took the photo below, because, wouldn’t you know, that was the day I decided to leave my camera at home!!! Look carefully at Mike’s photo because he caught a fascinating detail. We saw one lone Canada Goose (Branta canadensis) traveling along with this huge flock of swans! You can just see its dark body in the upper left of the photo, third bird down. Hope this adventurous goose doesn’t plan to go all the way to the Arctic with its new-found friends! 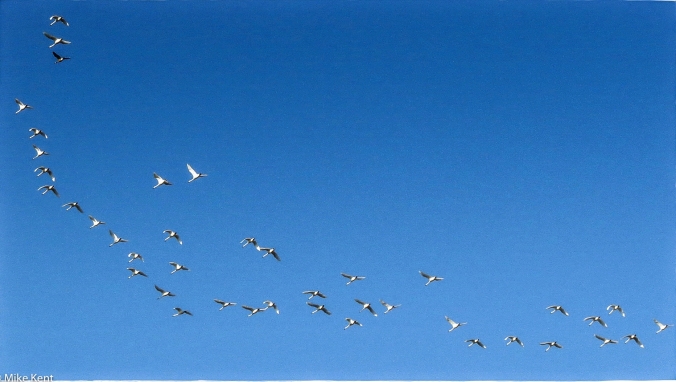 A huge flock of Tundra Swans with a lone Canada Goose (upper right) traveling with them. Photo by Mike Kent.

That Wednesday was great for seeing big birds at Ilsley Park. Mike also caught for us a nice photo of a family of Sandhill Cranes (Antigone canadensis) who settled at the bottom of a slope to rest and feed. The larger, darker birds to the right are probably the adults, while the two smaller gray ones on the left are probably last year’s young ones.

A family of Sandhill Cranes at Ilsley park. Possibly adults to the right, last year’s juveniles to the left. Photo by Mike Kent.

At Bear Creek Nature Park, smaller flocks were chatting in trees and foraging along the paths. A noisy group of American Robins (Turdus migratorius) were snatching berries from a tree infested with invasive Oriental Bittersweet (Celastrus orbiculatus). Some robins overwinter here and some migrate to southern Ohio and Kentucky. Some move back and forth all winter long. Though these non-native berries attract them during the winter, they unfortunately don’t provide much nutrition for the birds since thawing and freezing makes them very sugary. So migrating, in their case, might be a better choice!

A robin from a larger flock sits among the berries of invasive Oriental Bittersweet.

A small part of a flock of probably 20 robins at Bear Creek Nature Park this week.

On a path from the playground to the Walnut Lane at Bear Creek Nature Park, I saw my first flock of Song Sparrows (Melospiza melodia). I love to listen to these tuneful birds in the spring, but have never before seen a flock of them in one area, as I did this week. They were “chicken-scratching” by scooting backwards with their feet in a ferocious attempt to get at some food beneath the surface -probably small seeds or insect eggs. The flock was so busy that the ground along the trail looked torn as they scraped their way down to the frozen surface, looking for food. 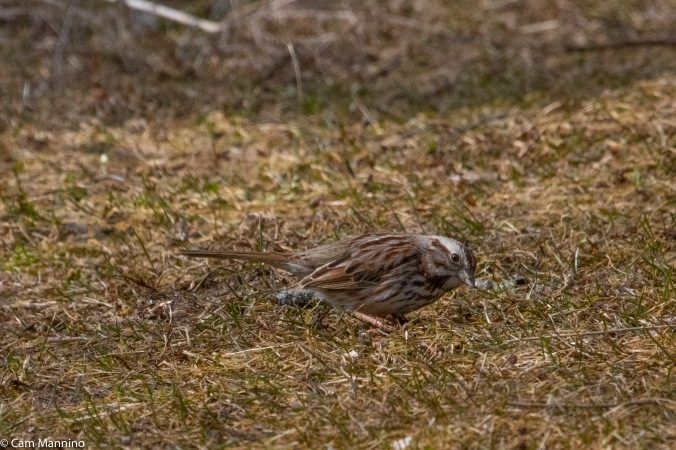 A Song Sparrow, part of a flock on the path at Bear Creek, searched for food by scratching backwards on the soil like a chicken.

Every year as spring approaches, I watch the Silver Maple (Acer saccharinum) to the right of the deck at Bear Creek’s Center Pond. It’s always one of the first trees to signal spring for me, its robust, red buds hanging gracefully from drooping branches over the water.

The swelling red buds of Silver Maple are an early sign of spring approaching.

A small Shagbark Hickory (Carya ovata) near the pond has just barely thrust its leaf bud from the woody protection it had during the winter (left). In May, it will be a huge glorious bud (center), and in June, the green leaves will unfold into the sunlight (right). (Click photos to enlarge; hover cursor for captions.) 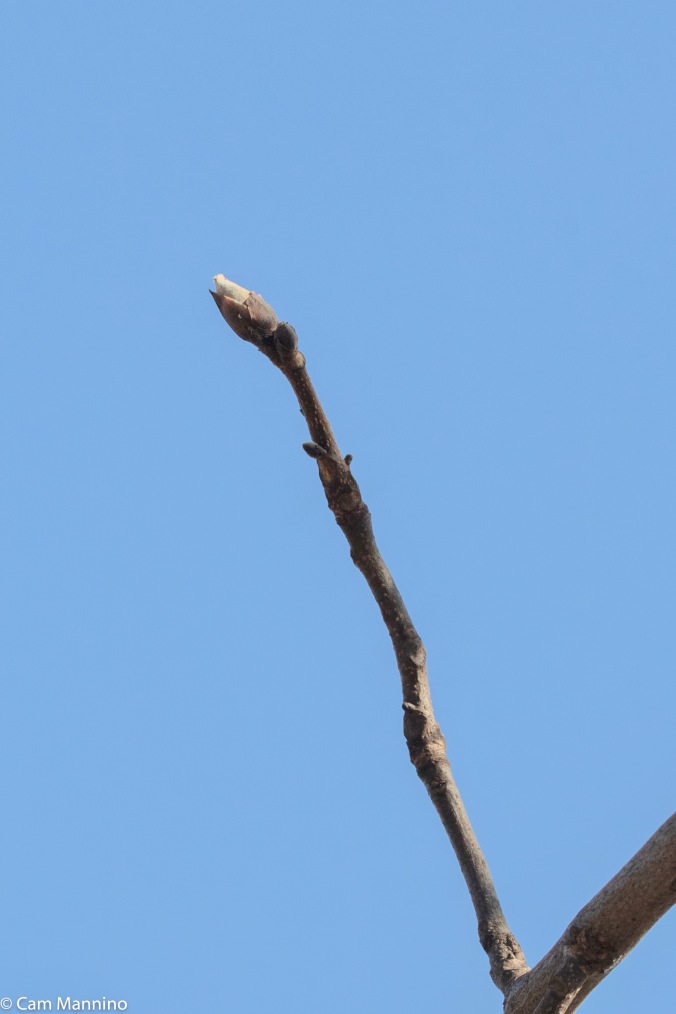 The tip of a shagbark hickory bud pokes forth from its woody winter covering.

Hickory buds emerging in May

Sky in a puddle at Bear Creek Nature Park

It’s the end of March. Most of the ice on the surface is gone (at least for the moment!), but the ground is still frozen beneath. So rain and melting snow have nowhere to go. That makes for muddy shoes, smeared pant legs and cars decorated in various shades of brown. But hey, those signs announce that full-fledged, glorious spring is almost here! Birds are beginning to sing, dance, do a bit of neck gymnastics, don spring colors and wing their way north overhead in huge numbers. And trees are slowly waking from their roots, sending sugary sap up through their vascular systems, ripening their leaves for another summer of sun-gathering. All of  nature, including us humans, have survived a very challenging, deep-freeze winter. Now’s the time to celebrate just being alive on a mudluscious walk in the pale sunshine of an early spring morning.