Look for this feature early each week! Cam Mannino shares her latest observations, photos, and inspirations from Bear Creek Nature Park. Don’t forget to check out the Preview of Coming Attractions at the bottom of the post to see what you should be looking for in the coming weeks. Thanks Cam!

This week the earliest woodland flowers took advantage of the pale sunlight filtering through bare branches and bloomed. Please help children understand not to pick flowers in our parks; we want them to prosper, seed and keep spreading!

The first to arise, as usual, were the native Spring Beauties (Claytonia), thrusting slender, grass-like leaves through the soil beneath large trees, followed by delicate white flowers with fine pink stripes. Look for them on the western edge of the path through the western woods.

Another early riser is our native Blood Root (Sanguinaria canadensis), named for its use as a dye by native basket makers. This elegant little plant emerges wrapped in an almost circular leaf cloak, after which the small, white flower with a bright yellow center opens to the sun and the leaf unfolds. I tracked its progress over 3 days under a large tree left of the path near the Gunn Road end of the marsh. A large patch of Blood Root also appears every year among fallen trees on the western side of the long loop behind the center pond. But be quick; these very early spring flowers usually last only a few days! 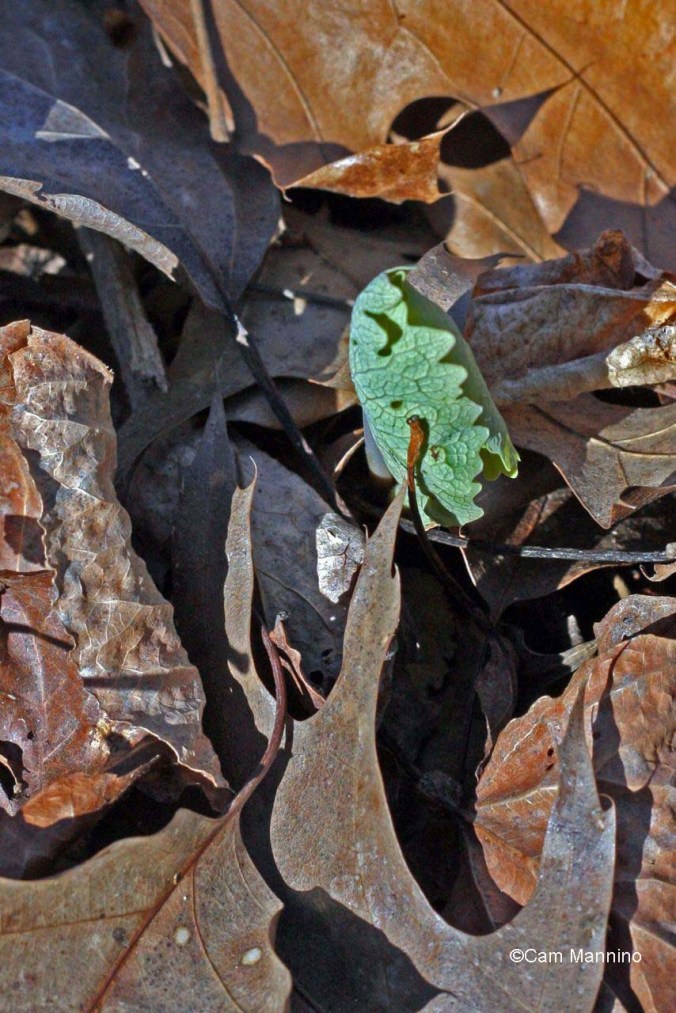 A flower bud hides in the emerging bloodroot leaves.

The more odiferous and sturdy native, Skunk Cabbage (Symplocarpus foetidus), nosed its way out of marsh mud at the southern edge of the western woods. Look down from the eastern side of the bridge built there for us by an Eagle Scout. If you get too close, whew! They do like to make a stink each spring but that’s how they attract fly pollinators and discourage would-be foragers!

Over in the marsh, two fighting Muskrats (Ondatra zibethicus) staged a splashing chase scene for me, but I was only able to catch a photo of one swimming away in its blue wake. 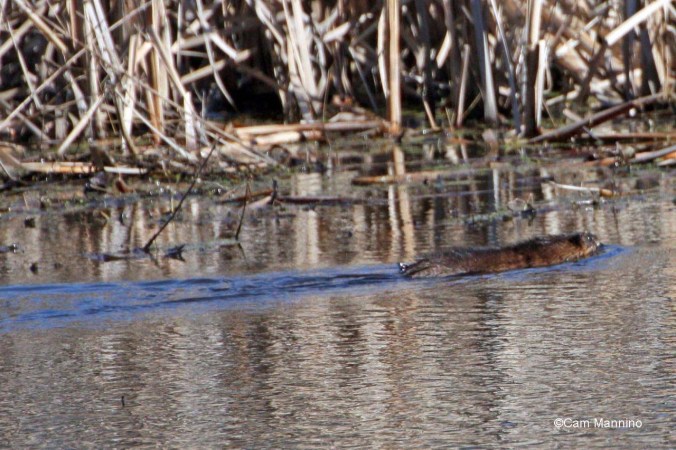 A muskrat steaming along

A day later it was turtle fest again. Five Painted Turtles (Chrysemys picta) basked on a log in the center pond, lined up by size as if they were the VonTrapp family!

Five turtles line up on a log at Bear Creek Nature Park.

And the same day, a large Common Snapping Turtle (Chelydra serpentina) cruised the marsh, eating underwater plants, its long neck stretching up periodically for air. Watch for what looks like a lump of mud moving slowly in the water, with the turtle’s beak-like snout emerging separately just ahead. Like this:

A snapping turtle swims with its head just above the water

Two days later on the large loop, I very carefully approached another snapper, which was probably seeking a place to lay eggs. She wisely sought a better location since there was no disturbed earth the next day. Don’t get too close! These big turtles are crabby on land and can quickly extend their necks which can be as long as their carapace. They snap with powerful jaws, because unlike other turtles, they are too big to pull into their shells. The snapper’s ancestors lived at the time of the dinosaurs and they look it, don’t they?

A big snapping turtle on a path. Maybe looking for a nesting site.

The female Red-winged Blackbirds (Agelaius phoeniceus) have now joined their flashier mates in the marsh.

A Red-bellied Woodpecker (Melanerpes carolinus ) drummed for a mate nearby. The males are red from the nape of the neck to the bill like the one below. The females have a red nape patch that stops at the back of the head. Not to be confused with the Red-headed Woodpecker (Melanerpes erythrocephalus), like the cartoon Woody, whose neck and head is completely red and whose plumage is very different.

A red-bellied woodpecker perches on a tree

Let’s see if these Trout Lily leaves (Erythronium ) near the Gunn Road entrance produce any beautiful yellow flowers. It’s been years since they have, but maybe the prescribed burn will help them out this year. It bloomed after a previous burn!

This trout lily, a native flower, bloomed after a prescribed burn in 2008

A May Apple (Podophyllum) sprout and drooping unopened leaf emerged in a sunny spot next to the path. In May, a white flower will bloom shaded under the fully open umbrella leaf, to be followed by an inedible “apple.”

Mayapple leaves unfurl from the ground

Sunday morning, a North American Raccoon (Procyon lotor) snoozed in this tree on the western-most path through the woods, only a small slice of fur visible at the bottom of the hole until my camera clicked. Keep watch here – by the end of May, baby raccoons may clamber around inside the hole as they have most years. I recommend whispering and staying on the path with binoculars or she and the young will disappear farther up inside the hole.

Come explore spring in Bear Creek yourself and please let us know about your discoveries in the comment section below.

One thought on “This Week at Bear Creek: Bear Creek Begins to Bloom”